There has been lots of exciting science news so far this year. The most talked about has been the observation of gravitational waves coming from the inward spiral and merger of two black holes by the LIGO experiment Here, predictions from general relativity which was formulated a century ago have been realized.

The instrumentation that allowed this observation is a technical marvel and a whole new way of examining the universe has opened up. This is great news and I'm happy that the hard work and perseverance has paid off confirming what most physicists expected. I look forward to more confirming data from gravitational waves soon.

In particle physics, there has been tantalizing news from many experiments about potential new physics. An announcement in February by the Daya Bay Neutrino experiment, located near the nuclear power plant in China, was overshadowed by the gravitational wave announcement. Here, the measurement of the electron anti-neutrino energy spectrum showed an unexpected bump and also they measured 6% fewer antineutrinos compared to the theoretical predictions. So both the experimentalists and theorists have to figure out what is going on.

With my old experiment, at Fermilab which is near Chicago, there was an observation of a particle which might be composed of four different kinds of quarks (tetraquark) which is very exotic. Immediately, the LHCb experiment at CERN has looked for this state and doesn't see it yet, so there needs to be more data to sort out what is going on. 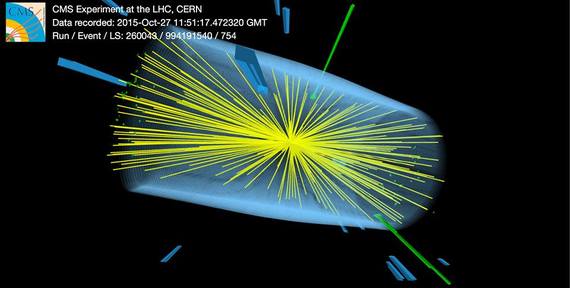 Meanwhile, with my current experiment, CMS which is located at CERN in the Large Hadron Collider, we have just released a new batch of results for the winter conferences. Here, we're presenting 30 new results since December, including an update on the di-photon channel. In December, both the ATLAS and CMS collaborations observed slight excesses at the same energy. Our experiment has added some more data that we collected last year to our December result and we've improved our sensitivity by 20% and slightly increased the statistical significance of the result. Theorists have been speculating what this new physics could be and we are all waiting to get more data as the "bump" is not yet statistically significant enough to declare a discovery. The accelerator is starting up again and we'll hopefully get enough data by the main summer conference in August to see whether this is really new physics or not. The bump could well go away or it may keep growing. These are really exciting times!