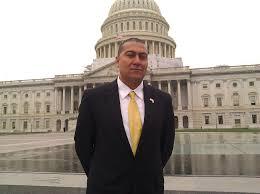 Powerful and fit like a boxer, 43-year-old Hispanic/Native American Presidential candidate Robert Ornelas uses music to rap with students in the 'hood. "I'm working with a program called PACE (Promoting Academics through Creative Expression) and we go into every single LA Unified School District school to promote academics through the art of hip hop. I encourage kids of all ages to stay in school, go to college, start a business, buy homes."

Ornelas and his group, the "SOG (Sons Of God) Crew" from Anaheim releases their fourth album, Fighting for Love on May 20. "The whole concept is that we're fighting for love, for the ones we love: our family, our community, our neighbors. My sphere of influence is the whole country right now."

JF: How would you sum up your message?

RO: It's a message of hope. The styles of music are relevant. It's dance music, reggae, inspired from Long Beach in the '70's, '80's. We've taken five years to produce this awesome album. Some of the best people in the industry engineered it; some very top people put their hand on this. Each song has a message. We have a song called 'All Together Now' which advocates against domestic violence abuse. We have a song called 'California' that advocates the Constitution of California.

Ornelas has been to some of the toughest schools in Los Angeles, Chicago, and New York.

RO: I'm working with (LA Mayor) Eric Garcetti, and a gentleman by the name of Thomas Heck (of PACEShow.org) who started a program called Summer Nightlights. We'd go into the worst communities in Los Angeles with violence high, where law enforcement needed some form of mediation and I would do the music. I would do a combination of morality, community, encouragement of hope, introducing Eric Garcetti and his team. The results were that homicides and all the gang violence went down a lot this last summer. I got involved because for years I've been helping out the LA Sheriff's department, when Lee Baca was the sheriff. I've helped out the San Diego Police Department. I've been blessed to help the chief of police in Santa Paula because of the murders that have been taking place there. Years ago I helped the streets of westside Chicago where the murders were really high. Southside Chicago. I'm involved in Brooklyn, Bronx, Queens, Manhattan, Harlem. So basically, it started from gospel hip hop, and it ended up advocacy, helping out communities that don't know what to do.

JF: What is your international experience?

RO: Mexico. I was a missionary to the prisons of Mexico for a long time. I worked with the government because I had to work with the churches. And in Mexico, the churches work with the rehabilitation centers that are connected with the government. I had access to some of the worst prisons in Tijuana. I went to a prison called Hongos Prison. The craziest one that's world known is a prison in Tijuana called La Mesa Prison. My wife and I, we probably went in there in 2000, and we learned the hard way how their system runs. When you go in, you're just thrown into the population and they start trying to take your watch off your wrist. The mob runs all over you, around you. It was culture shock. But the results from it: I've seen thousands of people receive Christ as their personal Lord and savior. I've seen people change their lives. That was one of my first training grounds, the ugliest, where a lot people don't want to go. Westside Chicago is like that. They're just kidnapping young girls when they're walking home from school and they're raping them. I go where the gang war is the craziest. I go and do prayer visuals. When somebody gets killed here in LA, and when the gang wants to retaliate, I talk to the community before that happens.

JF: About the drug war; what do you do with the Mexican border drug war? If you were POTUS, what would you do?

RO: (Big sigh.) If I were POTUS, I would allow them to do their job.

RO: Those that are protecting the border. The border patrol. Let them do their job. That's why the taxpayers are paying them.

JF: What about the tens of thousands of people who've died at the hands of drug lords and cartels?

RO: Ugh. Yeah, we'd have to build a wall. We have to protect our children.

JF: You really believe in building a wall?

Ornelas runs under the same American Independent Party (AIP) as Wiley Drake, a Southern Baptist. He's known Drake since they met at the homeless shelter on Drake's church parking lot in Buena Park, California, some 30 years ago.

JF: Do you feel, like Wiley Drake does, that there's a problem with homosexuals?

RO: (Long pause.) What would that be though? In general?

JF: Well, he calls them sodomites, so I just wanted to know where you stood on that.

RO: I have no comment on that. I have my religious convictions, but at the same time, I'm a realist. I love all people. My wife and I, we love everybody. I'm strong on marriage. As far as the gay/lesbian community, I don't have a problem with anybody.

JF: It was really clear that he disapproved of that. So much so, that... If you can't hold a place in your heart for everyone, it's going to be really hard to run for President.

RO: I agree. There's a word that stands out, and it's "posterity." That's what balances me out. That word, posterity, meaning all future generations of all people in our country. I have all posterity in mind. I am a Bishop, I've been an ordained Evangelist. I love the word of God, I have convictions in my heart. I love the United States, I love the citizens, I love the sovereignty that each person has. I'm rooting for the citizens of the United States of America. I'm here to pull people up and inspire them. At the same time I'm willing to talk to people and encourage them, and even to talk to them and debate back and forth why I have the convictions I do. We all live here, we have different cultures, different nationalities, different styles, rich and poor, middle class. I was raised with African Americans, I am Mexican American with Native American descent. My great grandmother was from the Cocopah Nation out of the Yuma Arizona area. So being raised in a community where you have white, Hispanic, African Americans, Russians, and then in the 80's growing up, the Cambodians came in. We lived near homosexual bars and nightclubs in Long Beach, raised off Anaheim and Orizaba. The gang members, the homosexuals, it doesn't bother me.

JF: How did you get involved in the American Independent Party?

RO: In 2012, I was selected by the delegates of the AIP to be a VP candidate for my presidential running mate, Thomas Hoefling out of Iowa. Being that I was a third party, independent, grass roots candidate, I went to my marketing guy from the music industry and I had him market my campaign and so it's been very unorthodox, but we're getting a lot of results from the social media because it's like we're going fishing and we're catching a lot of fish that we don't even expect. Networks, different movements, different cultures, I mean it really does help. For years, I've worked with the Korean movement the Chinese movements, I've helped out a lot with the Pilipino pro tem mayors, fundraising for the Philippines. I'm just scratching the surface of what we do.

When I ran for VP, because I was the first Latino in the history of the United States of America, and the second Native Indian to do that, a lot of people started looking my direction. I was invited everywhere. I was seen literally everywhere with everybody. All I know right now is to go into these schools and tell them stay in school until I'm commissioned...

Ornelas would like to give the kids in high schools the tools to make a difference. When I suggested that they don't need to be voting age to call their Congressman, he said,

RO: It's funny you said that because for years, because I'm involved in the hip hop community, the students in Los Angeles could only identify me according to their gang or according to their street. That's how the kids in the culture would talk. They'd ask, 'where are you from; who are you affiliated with?' so that they could grasp and understand you to see where you're coming from. That's how they would identify. Not today. Because I'm coming to the school as a Presidential candidate, they're not asking me those questions. They're asking me, "Do you know Bernie?" I'm talking about the Mexican-American kids or the Hispanic kids. They are interested. But because of the [rules of] education, they're not permitted to talk politics. So now you have kids that most of their art's been taken away, so they don't even know how to express themselves. They're trying to transition to express themselves using the popular culture of politics and they don't have an outlet for that.

JH: What are the top three things you would do as POTUS once you entered office?

The second thing is: education needs to be revamped. I visit schools across the country, the Hawaiian Islands, Native schools, boarding schools, west and south side Chicago.

JF: When you say it needs to be revamped, the states really handle education, at least undergraduate. Are you talking about Common Core? Because when you're on the federal level, you not going to be dealing with how the states run the schools.

RO: I would use all my influence to promote a campaign that would influence kids to want to stay in school. I watched Common Core come in; it was a team effort, but at the same time, what's the efficiency testing? 30%? Way below. I'm in favor of education, schools, junior colleges, universities, trade schools, but at the same time, education with the family: dinner table, mentoring and ministry, the common, the simplicity, just the fundamentals of character. The United States is in a dropout crisis right now. The effect on students, families, communities; it's affecting the economy. These kids are less likely to find a job, earn a living.