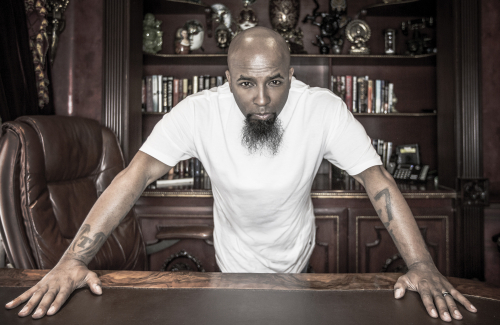 Tech N9ne is like a blueprint for how hip-hop artists should go about building their own empire. Tech N9ne has made mistakes in his past and he's learned from it, but through all of those obstacles raised a man who's been able to construct one of the best indie record labels in the music industry with Strange Music. Tech N9ne is multifaceted; where his acumen as a hip hop artist and performer is just as vibrate as his ability to create this world within he calls "Strangeland" that offers a place for himself along with his hip hop peers and fans alike to try to fight those inner struggles that we all have each day.

Tech N9ne has new album out Special Effects that is a mighty strong new chapter in his long career and I was able to chat with the Kansas City-based rapper about the collaborative nature of his projects along with the war within between good and evil that he has both personally and artistically.

You're still an indie monster. How are you able to navigate through those waters after all these years?
I tell everybody that I'm actually Dracula. I keep getting better with time. I'll be 44 this year and I feel like I'm 22. My music is getting better and bigger. This is the best album I've ever done in my life, in my opinion, so that means it's like a new beginning. I feel immortal. I know that the fans keep me going, my children keep me going, and me living life, and life happening to me keeps the content coming. This whole album was dedicated to my mom, which I lost last year around this time so that fueled a lot of the album. My mom's death to lupus. People turning on me. Some of my closest family members turning on me because of the Forbes listing over money. Things happen in my life really inspire me to write because I always wrote my life.

Family can be a joyous thing or a horrible thing at times.
It's a horrible thing because if I won the lottery I don't want anybody to know, its like inviting ants to a picnic, and I'm the most giving guy on the planet. To be a target after Forbes list you as the most paid in hip hop three years in a row and its going to happen again this year I'm sure, so that really makes everybody come out of the woodwork.

So your mom passed away last year. What sort of things did she instill in you?
She gave me my angel heart. I also have an evil brain, but the angel heart is truly from her. She was truly an angel, that's why I have the word "angel" tattooed on my arm. It came from her. She taught me how to love. I thank God for that because if most of the men in this world were taught to love, there wouldn't be so much turmoil on this Earth. I'm so glad that she taught me to love. She gave me that love bug. There's nothing like it. I don't have a hate bone in my body and that's because of her, even though I have an evil brain. Everybody has bad thoughts. Mine are just amplified. So is my angel too. I'm the perfect clusterfuck.

On the new album you have a track with Eminem on it. Talk about that collaboration.
It's one of my dream collaborations that I've been trying to get for over a decade. I guess everything worked out this time with the beat being top notch, with the concept being really wonderful because it's a dedication to the late great Richie Havens' song "Freedom", which they did at Woodstock. The timing was right I think. What me and Krizz Kaliko sent to him was really dope. For him to say 'I'll do it' and love it so much that he doesn't do the 16 bar verse that I needed, he does a 24 bar verse that he put on there and let me know he really dug it. He really wanted to spit on this song. I finally got it after all these years. The same thing with the song "Wither" with me and Corey Taylor of Slipknot. I've been a "Maggot" since 1999. A "Maggot" is a Slipknot fan. I finally got it after all these years. I think I'm bringing my A game. I've always brought my A game. I have some classic albums on the underground level to where I don't know if anybody critically acclaimed them. I don't need them to critically acclaim my albums because my fans do.

You have an unique product where usually rappers who have a ton a guest appearances on their album use that as their big selling point or to cover up their own shortcomings, but however, your guest appearances whether big name artists or up and coming, they both elevate you and the album. It's like you have created a playground for those artists to go beyond what they usually do.
This is Strangeland. When I go out and get Lil Wayne, B.O.B., 2 Chainz, Eminem, Joseph Bishara of The Conjuring, Insidious, and Annabelle. Everybody knows I do elite music. I'm really a lover of all types of different music and all my peers know this. So Tech N9ne sends you a song, it's just so beautiful that everybody knows to bring your A-A-A game. I'm finding that out more and more every day I do music. I want everybody to come into Strangeland and do themselves and they do, and most all of them all the time bring their A-A-A game. I love that because it lets you know I'm a hard worker and people recognize it. Never do I do music with big artists or any artists to gain their fans. That's never been written in blood. Just because I did a song with Wayne back in the day don't mean all of his millions of fans bought my record. No, it did not. I work with the people that I love musically. I grew up around DJs when I was younger so I know the BPMs and I know how to put an album together. The beats speak to me and tell me to include these people. I love to work with artists. I don't need to work with anybody but I want to.

On your albums, even if I'm not usually a fan of a guest you have, their verse is usually still very enjoyable.
That's crazy man because I had to fight a lot of my fans because of the 2 Chainz thing. When you speak of Technicians, these are people that love the technical style of rhyme and they don't think that about 2 Chainz, but if you're a real Tech N9Ne fan, you know that Tech N9ne always been three-dimensional: the king, the clown, and the G. There's always been songs like "Planet Rock 2K" on the party tip. If there was not that party tip, there would not be a "Caribou Lou" and would not have a gold record. Why would I alienate that? The darkness has always been there and I think I really teased people when I did a fully dark album when my mom was dying of pancreatitis in '09, even though she survived it back then. I wrote K.O.D. and a lot of people held that close to their hearts like 'Oh my God, this is my favorite Tech N9ne album!' because a lot of my fans are spiritual in pain like me. They feel it through my music. That's only a dimension of me. When it comes to the party, I'm going to always have it and 2 Chainz brings the party within the world of the Technicians. As long as they pay attention to the history of Tech N9ne and not just hone in on one thing like some of the fans do, which is cool, you can like what you want. You can like the darkness and not like the sexual music. You can like the gang banging music and not like the rock-n-roll music. It's always going to be confusion because I am three-dimensional.

What still inspires you as an artist?
Life, my fans, my children. I write my life. Life is happening to me everyday. Some years ago, the IRS came after me because me being young and not knowing too much about handling my business, I had to pay back a lot of money. So when the IRS takes all your money, either you're going to break down or you're going to use that pain. I've been using that pain for a while because I've been building my life back up after my mistake. It could have been jail time. They ain't playing. By the grace of God, thank the Lord that I have fans that can help me fix this problem. If I was an artist that was failing, I don't think it would have been a brighter day. I've always been hungry, even before they took my money. It fueled me. It's still fueling me. 'People want to know how I'm still hungry but they don't know how the IRS hung me' is what I say in a new rhyme.

How do you think you have changed since the beginning of your career?
The only thing that has changed with me is my consumption of drugs. I've been clean for almost 10 years I think. I feel like I've gotten even more sharp lyrically, crisp lyrically. Only thing else that has changed is, its always been a good and bad thing from the start in 2001 with Anghellic all the way to All 6's and 7's and Klusterfuk and everything, and all the way until now with the evil brain, angel heart. All the way up to this album, there's always been a theme of good and bad having a war within. That's always been the same, my battle with good and evil. The only thing that has changed drastically is the collaborations. The mainstream artists that after all these years become aware of the talent, work ethic of Tech N9ne.