The new hip-hop generation -- a generation that thrives on respect -- should demand it from the corporations that they patronize, says Munson Steed, CEO of Steed Media Group, a multimedia company that includes Rolling Out, a national urban weekly.

(Full disclosure: Steed is my boss, but he doesn't influence my blog!) 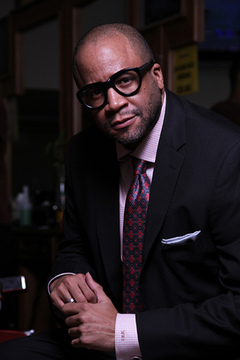 "The reality is that you're doing it wrong if you are participating with your economics with somebody who doesn't respect you," Steed told Vocolo 89.5's Luis and Shantell during the show, Real Convo on Race & Gender. "People respect you if they're paying and investing in your community; we don't want to have a true litmus test as a community, and we must."

Steed, also the director of the Madison Avenue Initiative, a group that pursues fairness in advertising, argues that with the struggling economy, it's even tougher for minority-owned businesses and advertising agencies to get a fair share of the advertising dollar. The result is insensitive ads, and the lack of community programs and job opportunities for minorities:

"If you look at Facebook, no one is asking the question, 'How many African American engineers, [do you have,] and are you recruiting from historically Black colleges and universities? But we're all using Facebook."

The new hip-hop generation should spend their money with businesses that reciprocate resources to their communities. Looking inward, these youths must demand more of themselves, as well:

"Our expectations have been lowered... Now you have a generation that has lowered it's expectations for participating in an economic way; so a guy might say, I want to be a rapper, but he won't say I want to be a copyrighter, and they're the same thing."

Adding to the arrested economic development of young minorities is the barrage of negative images that tout street credibility, over everything else, Steed states.

"Having The Cosby Show, and having an African-American father figure who was a doctor, and had a family and wore Black college sweatshirts was significant," he says. "All of a sudden there's a pervasive level of, you get lots of street cred, because as Guru says, 'The illest brother gets respect.' That's not true, the illest brother gets locked up, the illest brother gets put out...and he is that example that they run way too often on the news to frighten everybody...he's the stereotypical image that you see on reality television."

One solution for this generation is to see beyond the slick ad campaigns and make the effort to "be like Mike," so to speak.

"Everyone says that they want to be like some Jordan player, so they wear a lot of Jordans, but you can't wear that level of basketball," Steed explains. "So they convince people through marketing that you can be like somebody if you wear something. They convince people that you're like Jay-Z if you can say his rhyme with him, but you're really only payers for that image, you rent that image, and it doesn't really apply... The same is [true] about economics; you cannot be so enamored about corporations that do not invest in your community, and yet you've spent your dollar with them. And you wonder why you're not employed in the summer; that's a part of it."

He continues, "If people don't demand anything, they're not going to get anything."