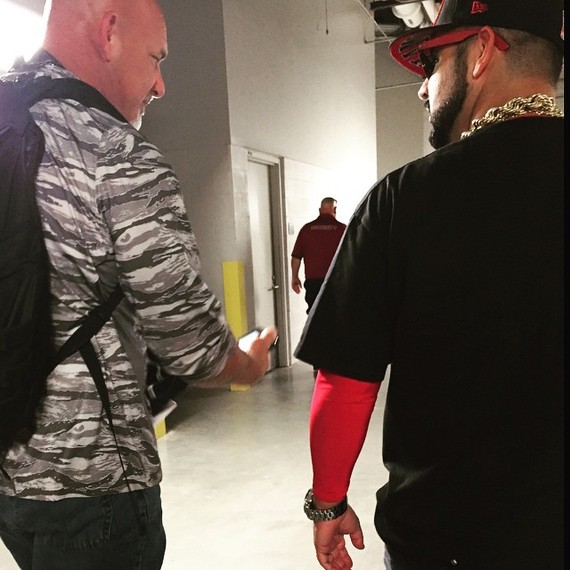 Bill Goldberg and I discussed hip hop at length today; so it would only be fitting if I started this latest installment with a photo of he and I, walking and talking...

Hip hop isn't merely music, it's a culture. The culture transcends music, it's found in the clothing worn by generations young and old; it's not just the hat, but how the hat is worn. It isn't that you are wearing a chain, it's that you are wearing two chains, or even three. It's about individuality, and at the same time, it's about universal elements that bring it all together...full circle! As NWA's new movie "Straight Outta Compton" hits theaters, let's consider how far hip hop has come.

Hip hop is an emotion, a state of being; a frame of mind. The feeling sticks with a hip hop fan long after the music stops playing. It's engrained in their thought process, their vision, even their walk. Decades after they called rap a fad, rap has evolved into hip hop. A nation of millions, perhaps someday even a world of billions, will foster the hip hop culture. Some will do it so naturally that they will not even know they're doing it. Not all will have learned the way of hip hop, for many it will be in their genes, their DNA; hip hop babies born into a hip hop world. The color of their skin won't matter, their origin will be irrelevant. They will not even have to listen to hip hop music to be hip hop. The fastest growing sector of music is Electronic Dance Music, or EDM. I submit that EDM is in fact the off spring of Hip Hop. Case in point, without the DJ, there would be no EDM. Without Hip Hop, there would be no DJ. See my point? Without the DJ nobody would ever have put the needle on the record and pumped up the volume!

Those who make hip hop their own are the ones who truly embrace the culture. It is a customizable culture, think about it. Making Hip Hop one's own, with the understanding of where it came from and where it is going sets the few apart from the many. Recording artist Cowboy Troy incorporates elements of hip hop into Country Music. Pop star Sam Smith jokingly raps and beatboxes; Ed Sheeran raps throughout his entire hit pop album. Those all serve to further the roots of hip hop, as it grows to new heights, reaching more and more people. When rap crossed over, eliminated the boundaries and spawned a hip hop society, it became a limitless medium.

The President of the United States has Hip Hop on his playlist. Nike has released sneakers paying homage to pioneers like Eric B. and Rakim. It was Eric B. who introduced his hip hop fan base to Fila jumpsuits, Gucci shoes, Louis Vuitton jackets. He was one of the first, if not THE first in the rap community to sign a million dollar contract, to purchase a Rolls Royce, to elevate his style to that of a luxury brand. In fact, it was Eric B who made wearing thick gold chains and huge pendants a popular trend; you can hear Rick Ross attributing that to Eric B. in the song "Ten Jesus Pieces". Who was the first artist to successfully use a sample on a record; Eric B.? It seems that Eric B. may truly be the God Father of Hip Hop. Just ask Nas... 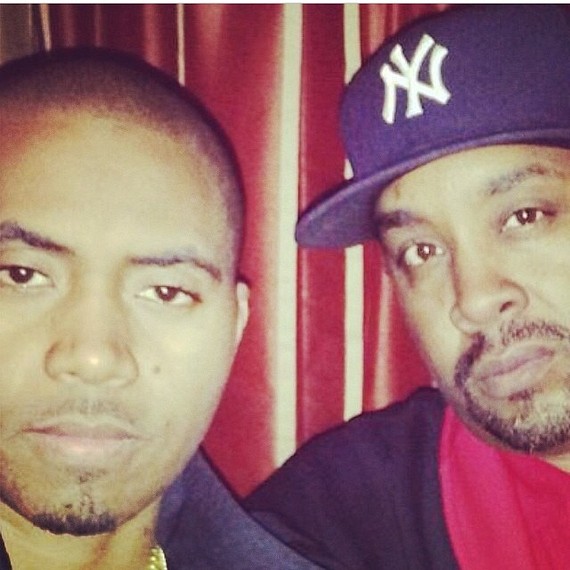 Sit back and think about how hip hop has impacted culture. Think about the hurdles hip hop has overcome and how it has united so many. From The Fat Boys scene in Krush Groove to Kid and Play's House Party movies, Hip Hop has made its way into so many facets of society. It has experienced many different cycles of various types of hip hop music. An evolution of sorts. From the message filled songs of the early renaissance of rap, to the fun filled upbeat songs of the 80's to the gangster rap of the 90's...and so on, and so forth.

As you grab your gin and juice, buttered popcorn and Twizzlers; sink into that plush movie theater seat and Straight Outta Compton begins to play on the big scene, think about the first time hip hop entered your life and the generations before who made sure it would...damn right it was a good day!

Entertainment impresario with two decades experience in the music, television and motion picture sectors of entertainment