I'm happy to announce that I've just returned home from the hospital with a new arrival. I'm not sure how much it weighs, but it seems to be healthy, and it's already walking -- albeit unsteadily and with a cane. And although I produced two children without an epidural, for this new addition I had no choice. I'm talking about my brand-new hip, which was swapped in last Tuesday. As a friend of mine said, there's a new joint in this joint -- and new joint and hobbling owner are slowly recovering. But the surgery has changed more than just my hip; it has also opened my eyes -- and my heart -- to the issue of blood donations, which I'll get to in a minute.

I'm a superstitious Greek. And for me this means, among many other things, that I don't believe in elective surgery, which is why no matter how wrinkled I get, I'll never have plastic surgery. Here is how the admittedly magical thinking goes: The gods will protect me if I have to have surgery, but if I'm just choosing to have surgery, I'm on my own. Elective surgery is usually driven by hubris, and there's nothing the Greek gods punished more than hubris. So I was half-afraid that I'd come out of my anesthesia fog with a new working hip, except that it would be the new working hip of a goat. Thankfully, I seem to have escaped that fate.

Now, a bad hip may not be life-threatening but, as I found out in the years leading up to my surgery, it can certainly be life-altering. It all started five years ago with a hiking accident. An MRI showed a labral tear. I was told surgery wasn't absolutely necessary, so I put it off. My philosophy of life, borrowing heavily from the Stoics, is that it's our attitude, more than our circumstances, that determines the life we lead. Then, a year later, I badly strained my ankle and needed crutches for several weeks, putting more pressure on the hip, which continued to worsen. I was given a year's reprieve when I met Anat Baniel, who practices a modified form of the Feldenkrais method of physical therapy.

But by this summer, the reprieve was over. My level of pain, buttressed by a new MRI, showed that the hip was now beyond repair. Every time I would see a staircase, my heart would sink. Cut to last month, when I found myself in Rome for the launch of HuffPost Italia. I was on my way to an event with David Thorne, the U.S. ambassador to Italy. We got out of his car, and beyond the bank of photographers, staring me in the face, was one of those long, uneven, and seemingly endless Roman steps. To my eyes (and hip!), it looked less like a beautiful Italian postcard image and more like Mt. Everest. I gritted my teeth and painfully made the ascent. A week later, back in New York, I was moderating a panel for the White Ribbon Alliance. At Urban Zen, where the event was held, I was stopped in my tracks when I saw that leading up to the stage were three steps -- not much, but they had no railing! I made it to the stage, but knew that I could no longer put off the inevitable. 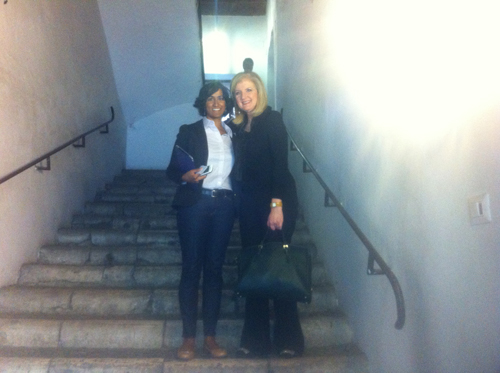 I had already given up hiking and even taking long walks. In LA, for years our senior editor Willow Bay and I would discuss whatever business we had to discuss on a hike. We would always walk and talk. But the last time I was in LA, the pain was intense enough that we were forced to, gulp, have an actual old-fashioned, sit-down meeting. So, no, the problem wasn't life-threatening, but it was making everything I had to do more difficult -- not to mention taking away things I loved, like hiking with friends. 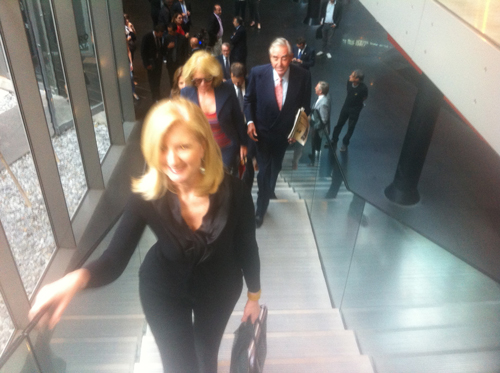 So that's how I found myself at the Hospital for Special Surgery, in a pre-op room with a beautiful view of the pre-dawn East River, feeling a lot of gratitude for modern technology. I'm a big believer in integrative medicine and the health benefits of things like acupuncture, homeopathy, herbs, meditation and yoga. And all of these no doubt helped me tremendously in those five years leading up to the operation. But this was the moment to thank the gods for Western medicine and modern surgery.

I was also blessed to have an amazing surgeon, Dr. Paul Pellicci, who was the youngest surgeon to become a member of the Hip Society about twenty years ago and a great team at a state-of-the-art hospital. And also the most fabulous Irish nurse, Anne Corrigan, who berated me in her distinctive accent when I forgot the post-surgery rules, but praised me -- "good woman!" -- when I did well. And now I'm learning to walk again on a new hip and leg that feels three inches longer than before (Dr. Pellicci assures me it isn't). After the surgery, he told me that he couldn't believe I was walking around on my old hip. It was like I'd been driving around in an old jalopy that I hadn't gotten serviced in years.

I've written a lot about the need to reduce stress in our lives, and be more centered and present. Well, I'm now in a place where I have no choice! I don't remember the last time I walked down the street without talking on the phone. But as I learn to walk again, if I'm not fully present, if I even get lost in thought, down I'll go. As Napoleon said, "the best cure for the body is a quiet mind." So no more multi-tasking for me, at least for a while. I'm finally living in a way that would make my mother smile. She abhorred multi-tasking. One of the last times she was angry with me was when she saw me opening my mail while talking to my daughters. She'd approve of my new uni-tasking lifestyle.

So for now, with a hat tip to my pal Bill Maher, I have a few "new rules" I need to follow. They include: "Do not bend greater than 90 degrees"; "Do not cross your legs;" "Feet should point up toward ceiling or outwards." And on Sunday evening, when I got back from the hospital, I had the pleasure of taking my first (cane-assisted) walk outside in the early evening with my physical therapist.

A funny thing about hip replacements is that everybody who has had one becomes a proselytizer. Case in point: When I told our AOL CEO Tim Armstrong, who got his new hip a few months after the acquisition of HuffPost, that I was thinking of finally having the procedure, he reassured me that it would make me feel a hundred percent better and he sent me a seven-point to-do list. The key item on the to-do list was to learn what not-to-do and to accept the need for a real recovery period (indeed, when flowers from him arrived at the hospital, there was one line on the card: "Get off your BlackBerry" -- he knows me well). Now, I've always believed in the value of acknowledging one's vulnerability, but my current condition has brought that home in a very tangible way.

The first day after surgery, I was elated just to have gotten through it. That night was the second presidential debate, which I was happy to be absorbed in. It probably helped that I hadn't tried to get out of bed yet, and that along with the debate I was also absorbing lots of post-op painkillers. (I consider myself very lucky I didn't "buzzed tweet" anything I shouldn't!)

Then came the second-day crash. My hemoglobin count had fallen to dangerously low levels. So they gave me a blood transfusion. An average adult human body contains 10 pints of blood and I got two new pints -- not a small amount. As I lay there through the six-hour transfusion, I had a lot of time to reflect on what was happening. It's a very humbling -- even overwhelming -- experience having someone else's generosity literally being pumped into your veins. The donors will never know who they helped. It was not something they did for themselves, or even their family or friends. It's an act of pure empathy and generosity.

In the days since my transfusion, I've learned a lot more about both this extraordinary generosity and the extraordinary need for more life-changing and life-saving donations. As of this summer, the Red Cross said blood supplies were at emergency low levels. This is especially critical because one in seven hospital patients will need blood, and yet it cannot be manufactured. Nor do hospitals accept blood from people who have been paid. It must be given on a purely voluntary basis.

A few other facts about blood donation, from America's Blood Centers, a nonprofit network of 600 community blood organizations:

-- Someone needs blood every two seconds.

-- One pint of blood can save up to three lives.

-- 17 percent of non-donors cite "never thought about it" as the main reason for not giving.

The Blood Centers site also points out that if just one percent more Americans gave blood there would be no shortage.

On both the Red Cross and the America Blood Centers websites -- on which I spent a lot of time while lying in bed -- that rewarding feeling that only service to others can bring is brought to life in the many personal "donor stories" about why people give.

Brian Boyle is an Ironman triathlete who in 2004 was in a life-threatening car accident. He lost 60 percent of his blood and required 36 transfusions during the multiple surgeries that followed. He now runs with the American Red Cross logo when he races to honor those donors who helped save his life. "During a race when I feel my heart racing and my blood pumping, these were once signs that I was dying," he writes, "now these are signs that I am living, and thanks to the Red Cross, living is something I don't take for granted."

Harry Jones, of Cascade, Mich., has certainly been heeding the call to donate. Coming up on the 33-gallon mark, he's changed the lives of nearly 900 people so far. "Giving blood is a good thing!" he writes on the Red Cross site. "It's easy, it makes you feel good, and people should know how important it is."

"I recently made a pledge to give as much blood as I possibly can so that I can sleep good at night knowing the fact that my blood is probably being used right now to save a life," writes another donor named Rafael.

"It's the best feeling in the world to know that there could be a kid out there with your blood inside of her because she needed it," writes blood-donor Ronni. "And you provided. It's magical."

I'm looking forward to being able to do the same thing soon.

I'm also looking forward to some other things: Hiking, walking without a cane, sitting in the lotus position -- and not looking at every set of stairs like they're Mt. Everest.

Add your voice to the conversation on Twitter: twitter.com/ariannahuff