Some folks just don't get parking. Slipping into a tight spot induces all manner of angst and trepidation. And parallel parking? In traffic? Are you kidding? Forget it. That takes a certain amount of four-wheel juju that some folks were just not born with.

But what if your car were able to fold itself up into a tidy bundle just two-thirds the size of a smart fortwo? What if the wheels were able to pivot at right angles to facilitate sideways parking in tight spaces? With the application of a few bits of technology, lousy parkers the world over are granted relief. No more parking lot anxiety. The mysterious and perplexing three-point turn has become a thing of the past. Rejoice!

Bad parkers the world over, say hello to your new best friend, the Hiriko. Developed on the drawing boards of the Massachusetts Institute of Technology (MIT), the concept has been brought to fruition by a consortium of seven small Basque firms under the name Hiriko Driving Mobility, with a prototype recently unveiled by European Commission President Jose Manuel Barroso.

The Hiriko -- which means "urban" in Basque -- is scheduled to go into production with a street date some time near the spring of 2013. Production of 20 test vehicles is already under way and trials are set to begin later this year in cities such as Bilbao, Spain; Malmo, Sweden; and Boston. 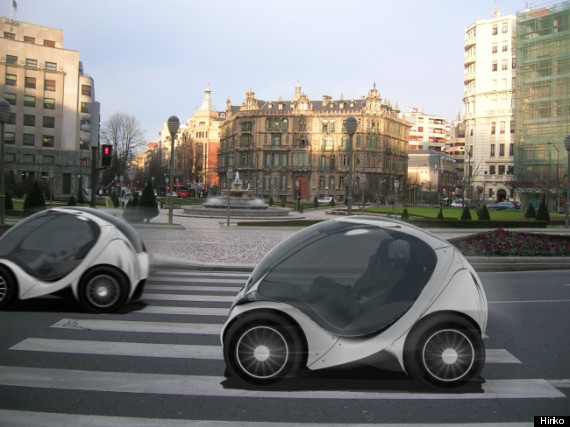 There are few tech or performance specs available for the Hiriko, but what has been released so far is fairly impressive for a micro city car. Here's what we do know: The car will run exclusively on electricity. The driver and passenger will enter the vehicle via the single, flip-up door in the front of the car that also doubles as the windshield.

The two-seater has a range of about 75 miles on a full charge and the car's speed will be electronically limited to a particular city's limits. So, don't expect top speeds over 50 mph and when it comes to a zero-to-60 time ... well, let's not even go there. The Hiriko is about convenience, utility and a common-sense approach to urban mobility -- not squealing the tires on the way to the grocery store.

The Hiriko is powered by four in-wheel electric motors. This is unique in two ways. Because there is not a conventionally connected drive train, the car can perform its most flashy move: folding up. It also means the car has an effective four-wheel drive system, great for bad weather, steep conditions or any situation where just a bit more traction is needed. The car's steering wheel will be replaced by a joystick or a "haptic" steering mechanism that tugs at a driver's fingers to suggest steering moves when directed to do so by the on-board navigation system.

The Hiriko's manufacturers see the car as a city-owned fleet vehicle that folks can rent out on an hourly or daily basis. Already, several cities have shown interest, according to Hiriko, including Berlin, Barcelona, San Francisco and Hong Kong. Talks are under way with Paris, London, Boston, Dubai and Brussels. If you'd like to (very easily) park a Hiriko in your own garage, the estimated sale price will be about $16,500.