Right off, its owner Elliot Braha proudly told me the storied history of 42nd Street Photo.

"Solomon Barnathan was the original founding father and our company's story goes all the way back to 1965. Solomon was an employee of a small store called Robert's Gifts on 42nd Street selling everything from greeting cards and bubble gum to cameras. Solomon opened his own store called Barnett's, also on 42nd Street in Manhattan, with a focus on electronic equipment and cameras. 42nd Street Photo was born. I got a job working at Barnett's as a sales clerk doing everything from sweeping the floors and cleaning the bathrooms to fixing Casio watches. I must've done a great job cleaning the bathrooms [laughs] because I took over management of the store in 1985. We expanded in 1986 to the present 5th Avenue location and continued using the brand name 42nd Street Photo to honor our heritage as one of the first consumer electronics and camera superstores in New York City." 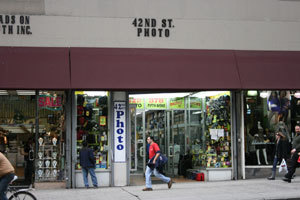 What is your company's greatest success?

"I've heard that 8 out of 10 entrepreneurs who start businesses fail within the first 18 months. We're operating a retail store in the middle of New York City and we've seen hundreds of consumer electronics companies start, stutter and eventually shut their doors. We've not only survived but we've thrived by being able to offer low legitimate pricing on photography, video and audio equipment in the middle of midtown Manhattan."

"We've made a great effort to expand our customer service team over the past few years. This was an area where we sometimes fell short and now we have a rapid response team to deal with any customer service issues quickly and in real time."

What has driven you in building such success?

"I love going to work every morning knowing that I helped to build this company and the amazing folks answering phones and standing behind glass counters every day helped create a multi-million dollar business that emerged from the recent recession stronger and more successful than ever before."

To what extent do you get involved hiring?

"I am involved in every aspect of the hiring process. Although our company is on LinkedIn and we advertise our products online and in traditional media, we find our most talented employees by word of mouth."

"When one of our best workers comes to us and says they know someone who is looking for a job and he or she is really terrific, it means a lot more than a resume in an email inbox."

And you keep personally connected to the process?

"As the business owner, honesty, intelligence and communication skills matter most to me and you can really only discover these qualities by meeting someone face to face. I've been doing this for nearly four decades and I can tell who has what it takes to succeed in our business in about five minutes."

"I know it may sound old fashioned, but in the electronics business and especially in New York City, you need to be able to deal with all kinds of people. We interact with tourists, immigrants, uptight socialites, students, celebrities and professional photographers and we need to be able to treat everyone like they are a VIP."

Best interview question you have used?

Do you have any hard-fast rules that are followed in your own hiring procedure?

"I don't care where someone went to college or where they live or even if they have previous sales experience, but I do want someone who is willing to learn what they don't know and who listens."

"The longest serving employee has been with the company for 25 years. The secret of his success is he listens. It's that simple. My son Jonathan joined the company about 15 years ago. He usually listens [laughs] but he also isn't afraid to share his opinions when we're doing something wrong or can be doing something better and I've learned to value someone else's opinion and begrudgingly admit I don't know everything."

"It can be hard working with family, but we've really made it work here at 42nd Street Photo. Jonathan brings an entirely different perspective to the business and helped our company define a social media strategy and expand our Web presence so we can compete with the largest camera stores in the country."

Note from the author: For more hiring, team building and employee retention advice check out my book The Naked Interview: Hiring Without Regret.

Do you have any advice to share for those interviewing?

"Don't lie. Be upfront about what you know and don't be afraid to admit that you still have a lot to learn. I'm still learning something new every day. When you make a mistake, please own up to it quickly so we can fix it. The worst thing to do is pretend like it never happened. It always ends badly and I don't have any tolerance for dishonesty."

Then honestly, what is the future of 42nd Street Photo?

"A lot has changed over the past 50 years. We have access to more knowledge in our pocket than a library. As a business owner who has spent his entire life selling retail electronics, I feel like everyone is going straight to the internet and that is not going to change, even though I miss the good old days when people sold cameras to other people in a friendly neighborhood camera store. I like the excitement of our retail stores when someone is holding onto a high-end DSLR camera for the first time or buying a gift for someone special. We definitely lose the interpersonal connection with customers when everything is online, so I hope we will be able to keep our doors open to everyone for the next 50 years and pass along our store's values to the next generation."