So, if you've been following, you know I write as the Hiring Guru. I interview a wide variety of business owners about their hiring practices; from billionaires to start-up entrepreneurs. But this story had to be told, just due to the timely nature and the "you can't make this stuff up" aspect! This would've made a perfect SNL skit for Donald Trump's appearance last weekend!

Jay Kamhi is an entrepreneurial small business owner as President of Kamhi World, a preeminent provider of unique, innovative, engaging and state of the art novelty items and right now his company is all about having fun with the 2016 US Presidential election.

To my surprise in our conversation he off-handedly said: "I recently created a Donald Trump Talking Pen and these pens were seized by CBP (US Customs and Border Control) for trademark violation." And, so a 'Huge' story began! 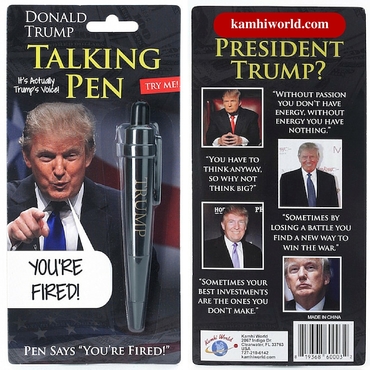 "This has never happened to me in the 20 years I've been selling political merchandise. They are now threatening to destroy the pens.  Seems the Team Trump camp won't allow this pen in, but Hillary's people had no problem with her pen. The Hillary pen made it through CBP without issue. Hillary actually has seen the pens and thinks they're funny. She did not try to stop them from coming into the country."

His product, the Hillary Clinton laughing pen has been featured on The Five, Alex Jones Show, and Newsmax, all of which are available for laughs on his Facebook page.

How does this happen Jay?
"The pens were seized because of alleged Trademark Violation. However, I believe I am legally entitled to make this pen under the Fair Use clause of the copyright and trademark laws. Unfortunately, many of these types of cases have to be fought in court, and I can't afford to fight Trump and CBP over the issue. My hard-earned $30,000 worth of pens will be destroyed if CBP has their way. I've been making fun political products that employ satire and parody for years and I've never had any politician protest this. I think it's noteworthy that President Obama never impeded the Obama Pen either."

Tell me in your own words, what's your history with Trump?
"I may need to stir the pot and make it known that the Trump camp has not lifted a finger to help me release my Trump Talking Pens from customs, despite numerous pleas and requests on my part. We have hand-delivered samples to the campaign headquarters twice. I've emailed the relevant terminals. No response from anybody."

"I wrote to Trump that I am a former NYC Street Vendor who sold on the sidewalks of Manhattan for 15 years of my life. I actually sold in FRONT of Trump Towers many times, and met him once. He was a role model for me, an inspiration, and this pen was a tribute to him (see the back of the pen). Most jobs are created by small businesses like mine, and pens like this support my company. This particular Trump pen promotes Trump AND creates jobs. For a politician who wants to build the economy and create more jobs, this is a huge no-brainer."

"When I initially called Trump headquarters two weeks ago, the woman said she'd forward my request to another, and then said, "But we probably will have no interest in helping you." I then had a good friend dress up in suit and tie and hand deliver both the Trump and Hillary pens to Trump Towers, and the package was couriered upstairs to the Campaign Headquarters. With no response. And now, after letters back and forth between attorneys - Trump's people rejected a licensing offer with no explanation! They simply allowed $30,000 worth of product to be destroyed, no empathy, no alternative solutions, nothing." Surprising, as Jay is the preeminent talking pen provider in the USA, and gave them recommendations from some of the biggest companies about his abilities... and Hillary approved of hers... 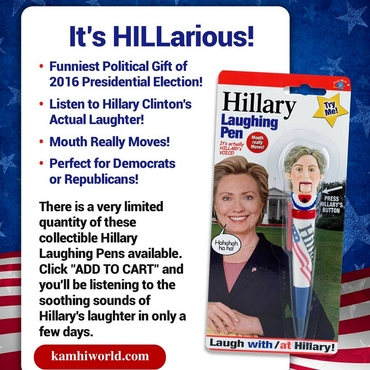 Is anyone helping you secure their release?
"Funny enough, I contacted another presidential candidate, Senator Marco Rubio, and he personally contacted me the following day and has been gracious enough to advocate for me. I am a resident of his state and he's trying to convince Customs to release the pens."

Has anyone else covered this story?
"Several outlets, including ABC in Tampa who did a story on me last week."

So, I've gotta ask Jay, who's currently winning your pen "election"?
"Well, I'd love for enough attention to be drawn to this issue that Trump says, "OK, let 'em in!" and he could become a front-runner; because, in the battle of the Presidential Pens, Hillary's pen is getting far more interest and sales than the Trump pen. Of course the Hillary pen is sold on Amazon.com and the Trump pen is Out of Stock!"