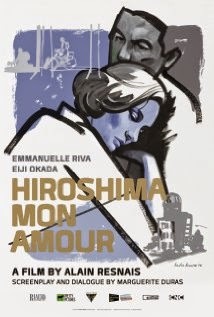 If you grew up in the 50's and 60's and had the opportunity of seeing Alain Resnais's Hiroshima mon amour(1959) which is currently completing a revival at Film Forum, you might have been haunted or even experienced nightmares from the images, in particular the initial scene of two entangled bodies whose skin is covered with a strange encrustation that could be mistaken for scar tissue. Then there were the shots of the Hiroshima Museum with its melted bicycle and stones, it's pictures of deformed bodies and "anonymous hair" and it's citation of the fact that the temperature at the city's Peace Square was l0,000 degrees. Now more than fifty years since the film's release, it's remarkable that we have become so inured to the imagery of the aftermath of the atomic blast, that the traumatic effect of these self-same images is practically nil. Ironically this turns out to be Resnais's central theme. Time has not only brought the director's point home, but brought it close to home. Another thing that Hiroshima underscores is the fact that Resnais functioned best when he was dealing with collective memory, which he ultimately appears to value over that of the individual--despite its intrinsic frailty. Together with his earlier documentary about Dachau, Night and Fog (1955), Hiroshima constitutes a powerful diptych dealing with both the trauma of war and the trauma of life. Last Year At Marienbad, the film for which Resnais is perhaps best known, is mysterious, but for all Hiroshima's complexity and its numerous self-contradictory koans ("I will remember you as a symbol of love's forgetfulness" is one many examples that run through the movie), it's remarkably specific. Emmanuelle Riva plays a French actress and Eiji Okada, is the architect who is her lover. As an 18 year old, during the occupation of France, she falls for a German soldier. She undergoes public humiliation, losing her hair much the way her Japanese counterparts lose theirs due to the bomb. There's little polemical or didactic significance, but the historical connection is intentionally far more durable then the recollections of the characters in Marguerite Duras's brilliant script. "I'm beginning to forget you; forgetting so much love is terrifying" the actress says as the brief encounter of the protagonists begins to implode. Freud said "hysterics suffer mainly from reminiscences," but it was Joyce Stephen Dedalus who commented that "history is a nightmare from which we are trying to awake." The title of the movie should be taken literally. It's Hiroshima that's the true love object of the film.