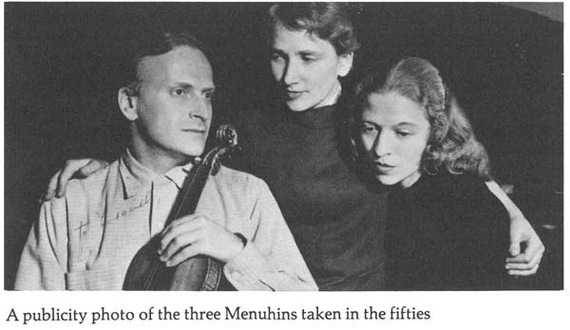 When I wrote my first book on my family nearly 40 years ago--based on the key figure who was my uncle, Lord Yehudi Menuhin--I kept having a terrible time tracking down his name.

People had rarely heard of Yehudi's last name, the Menuhins. They also had rarely heard of his first name, Yehudi, which mean, simply "The Jew." He was one of the greatest violinists of the 20th Century. It turned out that Yehudi as well as my aunt Hephzibah Menuhin and mother Yaltah Menuhin, both concert pianists, were great musical prodigies as well. Yehudi was generally regarded as the greatest musical prodigy since Mozart. You can see my uncle, aunt and mother in the above publicity photo from the '50s.

It turned out that my grandfather Moshe had offered his last name to Ellis Island workers who didn't know how to spell it. So he anglicized it to "The Menuhins." No one else ever had the same name. But in the course of my work, I later learned that he did come from a famous Jewish family. They were called the Mnuchins, with a strange Hebraic pronunciation of the last syllable that was not then acceptable to the name makers at Ellis Island in 1916.

I met a few Mnuchins later--they knew they were related to the Menuhins but they weren't sure how. They were orthodox Jews. There was nothing much that unusual about the family. They were not the famed geniuses the Menuhins were. They were just good intelligent folks and sometimes not so good.

Until Commandant Donald Trump arrived on the scene and picked one of the crowd to be his treasurer. Steven Mnuchin was a Wall Street executive who profited from the financial crisis after buying IndyMac and renaming it OneWest Bank of Pasadena in 2009.

Sen. Elizabeth Warren (D-Mass.) called Mnuchin "The Forrest Gump of the financial crisis because he managed to participate in all the worst practices on Wall Street" during his lengthy career. Warren said that his selection 'should send shivers down the spine of every American who got hit hard by the financial crisis."

Mnuchin never played the violin well, but he made a fortune off OneWest Bank during the "recovery plan." His father was Robert Mnuchin, a long-time Goldman Sachs Group player. Steven was "a second generation Goldman banker who made his fortune by foreclosing on the homes of working families in Southern California, according to progressive Democrats. He also made movies like "Avatar" and "Suicide Squad," "American Sniper" and "Mad Max: Fury Road."

Mnuchin probably spends more time at his $25 million Bel Air home rather than his Pasadena commercial property. Activists came to protest his actions at the Bel Air home and picketed him at some length in the recovery home. Then they went home, and hounded him from their homes.

Mnuchin had always been a democrat, aligned with George Soros, before signing up with Trump. He had even before associated with Hillary Clinton.

That will make him a genius, no doubt.

Toward the end of Yehudi's life, we had a somber meal at a Pasadena hotel where we talked of many things. Yehudi was never like a Mnuchin, despite the similarity of their names. He was a progressive in all things. He publicly came out against Nixon who was trying to act like a beleaguered Nazi against those who disagreed wit him. Yehudi had started the international boycott of world famous musicians against South Africa because of apartheid. He had worked closely with India Prime Minister Jawahral Nehru and at Westminster Abbey in London, Desmond Tutu had proclaimed at Yehudi's funeral the true beauty of his music, which he had heard the first time as a youngster as a student from Alan Paton's "Cry the Beloved Country" book.

This time, though, Yehudi told me he did not think things were going to go well. He feared that there would be increasing despotism in the world, and increasing class war. He no longer was that gentleman of hope and optimism, like he once had been.

I do not know the entire history of Menuhin and Mnuchin--they were the same family, however. Unlike his latest words in Pasadena of gloom and despair, Yehudi was using Pasadena as a platform from which to describe the sadly hopeless place the world was coming. I had never seen Yehudi acting as sadly as he did at that meal.

Lionel Rolfe is the author of a number of books, many available on Kindle books from Amazon books, which also offers a number in paperback as well.