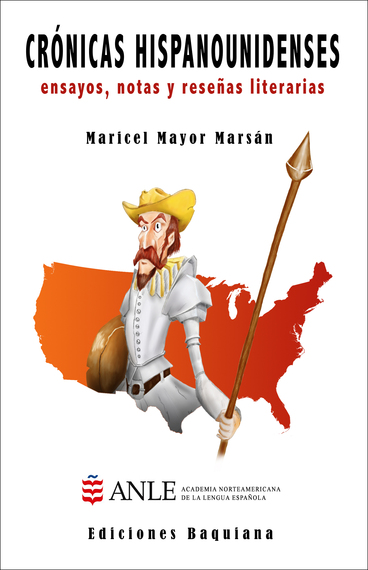 Book covers can often have a revealing function. In the case of Hispanic-American Chronicles, its cover is quite appropriate. Illustrated in bright colors, one can appreciate a map of the US with the iconic figure of Don Quijote de La Mancha dressed in his traditional suit of armor with a tight grip on his shield and lance, posing right in the middle of this map. Regarding this illustration, author Maricel Mayor Marsán, explains that instead of the shaving basin used by Don Quijote as a helmet, he is wearing a cowboy hat. In other words, one can immediately capture the biformity of the concept being portrayed, which is the duality that makes up a Hispanic person in the United States. The facial expression and the chivalrous stance of the celebrated character is as if he were saying, "I am here too, and here I will defend the language of Cervantes."

Although the Spanish language was spoken before English in what is today the United States of America, years ago in this great country, especially in some regions, listening to someone speak Spanish was uncharacteristic or simply unheard of. However, today the Spanish language has achieved an extension that permeates every corner of this nation. The projection and prominence that the language has acquired is noteworthy. The great migration of Hispanic groups, the economic power of some, and the advancement of technology have continuously contributed to the expansion of the Spanish language along with the Spanish culture. Hispanics in the United States (US) have gradually created a cultural and linguistic niche that has enriched in many aspects our lives here. An example of this is the duality in which we can live. We are from there, but we are also from here. In other words, we are hispanounidenses - a Hispanic in/from the US. As the author of Hispanic-American Chronicles: essays, notes and literary reviews (titled in Spanish Crónicas Hispanounidenses: ensayos, notas y reseñas literarias) Mayor Marsán explains, the word hispanounidense is a neologism coined by the New York based North American Academy of the Spanish Language (ANLE in Spanish). The term has now been accepted by the Royal Academy of the Spanish Language. Undoubtedly, Hispanic-American Chronicles exemplifies the advancement of the Hispanic literary and cultural heritage in the US.

Hispanic-American Chronicles gathers a series of stories, manifesting different genres, among which one can find essays, notes, and reviews published through a variety of media sources in the American continent and Spain between the years 2000 and 2012. In the content of these pages, Mayor Marsán writes considerably about the literature undertaken by Cuban writers especially those in exile, a group which has had an enormous influence in retransmitting the Spanish language. To a lesser degree, the work of other Hispanic writers who reside in the US is also featured. Following this modality, the contextualized narratives and comments of the author are contained within the scope of the Spanish-speaking diaspora. Within the section titled notes, as well, the author includes comments highlighting the work accomplished by organizations such as Baquiana, a Miami-based Spanish literary journal, whose digital publications are accessible to readers globally, and the North American Academy of the Spanish Language, which promotes the study and correct usage of the Spanish language in the US.

Through Hispanic-American Chronicles, Mayor Marsán demonstrates the literary contributions made in Spanish primarily by Cuban writers of the diaspora, upholding the use, exposure, and persistence of the Spanish language in the US. In brief, it is important to note that Cuban-Americans represent one of the most numerous Hispanic groups in the US. In addition to their quantitative representation, having one of the highest levels of education among Hispanics in the United States (Brown & Patten 2013) has allowed Cuban-Americans, generation after generation ever since their arrival to these shores, to have an enormous influence in the Spanish language in this country - a sometimes overlooked detail. Perhaps, for early Cuban exiles, the initial uncertainty of their sojourn upon arriving to the US served as an unintended force in the continuity and eventual permanence of the Spanish language along with English especially in South Florida.