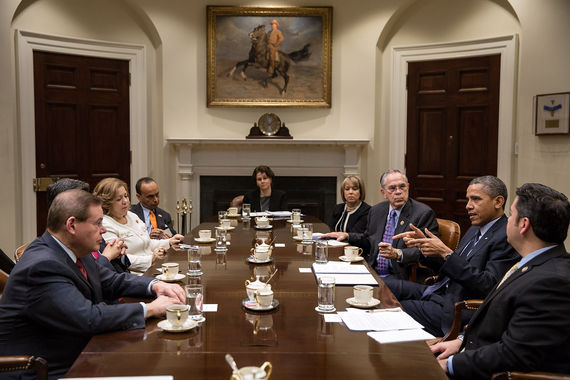 President Obama's delay of administrative action on immigration was a huge blow to the hopes and morale of undocumented immigrants and organizers around the country. However, it wasn't a shocking announcement from a President who is known as the Deporter-in-Chief in our communities, and who refuses to even meet directly with the undocumented leaders who risk everything to keep their communities together.

With the most recent delay, President Obama ensured that over 60,000 more people face deportation in the coming months, and shifted the national conversation among many advocates toward the timing of his pending actions and away from the scope of those actions. Although it's clear that this was purely a political attempt to save a few Democratic seats in the Senate, the shift in the conversation presents an added bonus for an administration that has done everything in its power to lower expectations for the scope of the coming actions.

While his efforts have been unsuccessful with the undocumented immigrants who are directly impacted by immigration raids, collaborations between ICE and local law enforcement, and exploitation at the workplace, his success with the political class in Washington is obvious. Whereas just a few months ago members of the Congressional Hispanic Caucus touted a set of recommendations that included ending Secure Communities, and providing relief for those who would have qualified for legalization under the Senate's immigration bill, today even Congressman Gutierrez seems to have given up on the demand of maximum relief and settled on the new beltway talking point of protections for parents of U.S. citizen children with a minimum ten years of residency in the U.S.

Although the fatigue is understandable, it is highly disappointing to see a person who has so openly and ferociously challenged the administration on the issue become complacent with the low bar for relief the president is willing to extend, especially after the latest delay.

The president and his staff showed that he holds politics above the latino and immigrant communities, and continues to move forward with his efforts to lower the expectation for what is possible for him to do. Rather than resign themselves to these ever less substantial proposals for expansion of the DACA program and changes to enforcement programs, Congressman Gutierrez and other Latino Democrats in Congress would be entirely justified to break with the president.

Whether they are perceptive of it or not, Latino members of Congress have become another political football for the president to play with, and unwittingly provide cover for the president when they meet with him or his staff every time he throws the community they represent under the bus.

This is why the strongest statements they can make at this time is to abandon the White House's messaging in exchange for the demands of the people they represent, and to boycott further meetings with the White House until President Obama meets with undocumented people directly impacted by his policies who have always raised the bar for what is possible and necessary.