Seven members of a Hispanic family from Los Angeles became victims of a mistaken drug raid at a home in the city of Norco in Riverside County by nearly 40 Immigration and Customs Enforcement (ICE) and Homeland Security, Immigration (HSI) agents.

"Where's the money? Where are the drugs?" the agents shouted at a terrified Carmen Bonilla. At about 3:45 in the afternoon, Bonilla, of Mexican origin, and her daughter-in-law, Leticia, were cooking in anticipation of their husbands' arrival from work. The agent insurrection would end at 7 that evening.

They simply grabbed me by the arm, threw me on the ground, handcuffed me and slammed me up against the wall."

Bonilla said she implored the agents to let her turn off the stove and grab her granddaughter, who was screaming in fear. "Shut up or we'll shoot you! We have orders to shoot," she said at a news conference. "I begged them to let me get to my granddaughter, but they did not understand me and continued to beat me," she said.

Michael Martinez, a 16-year-old Norco High School student, said he was in back of the house when he heard the commotion. He was getting ready to go to a football game.

"Get down on the ground!" he remembered, as four agents descended on him and immediately handcuffed him. "I heard my mother's screams as the baby was crying in fear, not knowing what to do. When they finally left, we had to take my mom to the hospital; she suffers from diabetes."

Armed with a search warrant, ICE and HSI agents scoured the Bonilla home. The agents produced the warrant to Josefina Martinez, Carmen Bonilla's daughter, after the odyssey was over and they were retreating.

"I was in the kitchen when they said to open the door or they would shoot," said daughter-in-law Leticia Hernandez. "I saw them hit her [Carmen Bonilla]. They said they had orders to shoot. I saw them kicking her. I was inside and the baby was crying. They aimed their guns at me if I wasn't quiet," she said. "Where are the guns? Where is the money?"

"I told them there was nothing in the house," Hernandez said.

The agents found neither the dealer, nor evidence of any crime. However, the Bonilla family must appear Tuesday before immigration officials, who seek to deport them from the United States.

Jessica Dominguez, an immigration expert and attorney, is representing the Bonilla family in the case.

"Throughout my entire career I have insisted that the community learn what its rights are and how it can exercise those rights without fear," the attorney said. "In [Carmen] Bonilla's case, she asked, implored, pleaded that they listen to her, but her rights were systematically ignored and trampled."

Last month, ICE director John Morton circulated a memorandum to all ICE special agents in charge of their offices and their attorneys, calling for his officials to exercise judicial discretion when deciding immigration cases.

The June 17 memo enumerates a series of positive and negative scenarios in which officials are to use their discretion, including the duration of the person's presence in the United States, with attention to the extension of a person's right to stay in the country legally; the circumstances leading to their arrival in the United States, particularly if the foreigner arrived as a child; educational pursuits, with the eventual graduation from high school, college or university in the country; or whether the person is a U.S. military officer or family member of an officer.

"ICE's cowardice knows no limits. They are not following the discretionary directives set forth by ICE director John Morton," said Jorge Mario Cabrera, spokesman for the Coalition for Humane Immigrant Rights of Los Angeles. "It hurts us to see this type of abuse, and this case so especially fraught with civil rights violations."

The negative factors outlined in the memorandum also apply, including whether the individual has a criminal record; a poor immigration history that includes deportations; the denial of past or present immigrant status due to fraud; and if the person represents a danger to national security and the public.

In a written statement to AOL Latino, Lori K. Haley, public affairs officer and spokeswoman for the Western Region of the Department of Homeland Security, said: "Because the criminal investigation is ongoing, and the fact the family has made allegations of inappropriate conduct on the part of ICE and HSI agents, what we can say about the incident is limited."

"We've contacted our attorney in Washington to see if we can shed more light on this brief statement. We are hoping to issue journalists a copy of the search warrant, but we've been told that as of this moment the warrant is sealed. If we receive authorization to clarify our statement, we will send additional information," the statement said.

The full text of Haley's statement said, "Immigration and Customs Enforcement (ICE) agents for the Department of Homeland Security went to a residence on Corona Avenue in Norco, Calif., Tuesday (July 19) to execute a search warrant related to an ongoing federal investigation.

"In the execution of their official duty, the ICE agents and officials uphold themselves to the highest standards of professional conduct. If persons involved believe that ICE personnel has acted improperly or illegally, the agency encourages that those issues be reported to the ICE Office of Official Responsibility, or the Office of Inspector General for the Department of Homeland Security. All allegations of misconduct will be investigated thoroughly and, if substantiated, appropriate action will be taken."

The Bonilla family is outraged.

"We haven't committed any crime in this country. We had just moved into that house July 1," said Josefina Martinez. "They harassed us with the threat of returning if we spoke [publically about the case]." She said the Bonilla family wouldn't be satisfied with a public apology from ICE, "especially when my mother is all beaten up and they tell you that you have no rights. They destroyed my family ... they changed our lives forever."

Martinez says that now, every time there's a knock at the door, everyone in the family is in terror. "This hurts too much. And what's worse is as they were leaving, they were laughing about what they had done," she said.

The accusations made by residents against the agents authorized by the court to conduct the search have been referred to the ICE Office of Professional Responsibility for further investigation.

Homeland Security investigators determined that eight of the occupants living in the home were in the United States illegally. Four adult men were detained at the scene and held for deportation.

"For humanitarian reasons, the other four individuals found in the home were issued summonses to appear in court at a later date with ICE [officials] for processing. Those cases will be presided over by an immigration judge, who will determine if the four have a legal basis to remain in the United States." 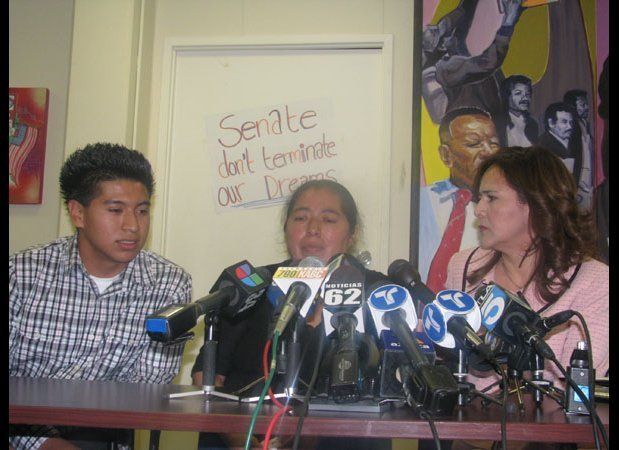