Every day, 10,000 more Americans turn 65. The baby boomers are behind an unprecedented agequake that will shake up not only this country, but the rest of the developed world. How will this vast new market impact the economic and social landscape? What are the opportunities for business to interface and innovate with these new, mature, sophisticated audiences? "Infinia on Aging" will explore how the experience of aging is being reshaped -- and how it is reshaping consumer demand and behavior domestically and globally.

In this five installment in the series, we examine how Latinos live longer despite lower incomes and more health problems, adding color and complexity to the surging ranks of the nation's elderly.

The paradox begins at birth: Latinas deliver healthier babies than their circumstances would suggest. It continues through to death, with Hispanics living longer than other U.S. groups, including whites who have distinct advantages in income, education and health care. 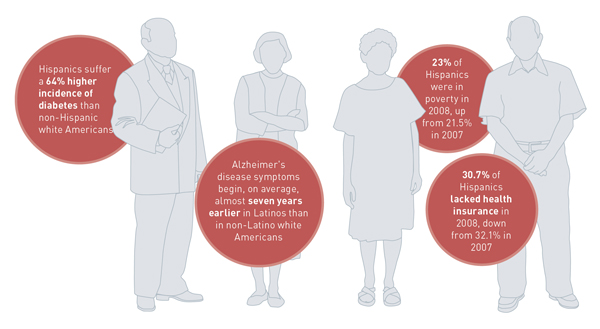 Questions abound on why Latinos are born with health advantages that help carry them to a ripe age. Researchers have dubbed it the "Hispanic paradox," with suggestions the Hispanic culture contributes to longer lifespans -- including closer family ties, healthier diets with less fast food, and more manual labor that keeps workers in shape.

Whatever the cause, the results promise an added challenge to the aging of America. The country already is bracing for a steep rise in its elderly as baby boomers enter their retirement years. Policymakers also must prepare for shifts in its elderly demographics: By 2050, long-lived Hispanics will account for nearly 20 percent of those older than 65, or nearly four times their 5 percent slice in 2000.

The change hasn't gotten the attention it demands, as if Hispanics were the "invisible boomers," says Richard Johnson of the Urban Institute in Washington, D.C. "So much attention is paid to boomers and how they are transforming work and retirement, but little attention has been paid to the growing Hispanic population," he told the Milwaukee Journal Sentinel.

Hispanics emerged as the nation's fastest-growing minority in recent decades because of immigration and high fertility rates. They are fast becoming a potent political force, as well, as seen in voter-registration and get-out-the-vote campaigns aimed at Latino communities. A significant factor in several states, Hispanic voters are particularly important in Florida, considered a crucial swing state in the 2012 presidential election.

Despite Latino votes, there are few signs that policymakers have responded to the coming surge in Hispanic elderly. And Hispanics as a group could strain safety nets such as Medicare and Social Security because of lower incomes, savings and education levels, says William Vega of the Edward R. Roybal Institute on Aging in California. "Many of the older Hispanics will depend on a network of social services, and we don't know if these will be available in adequate levels to meet their needs."

The growth of older Hispanics is the most prominent of rapid changes coming to the look and culture of the elderly in America. Until recently, whites dominated the nation's retirees, accounting for 84 percent of those older than 65 in 2000. By 2050, they will represent only a slight majority at 58 percent, according to U.S. Census projections.

Living longer, not healthier
But the growth of the Hispanic population is unmatched, as are the unique issues raised by the Latino paradox. Plus, besides living longer, Hispanics also appear to suffer more than their share of medical ailments. Latinos are at greater risk than whites for diabetes, obesity, cardiovascular disease and stroke, among other diseases.

Researchers can't link those risks to genetics, as Latino and Hispanic refer to geographic and cultural heritages; Latinos can be of any race, including white, black and even Asian. Many of the elevated risks for Hispanics must arise from other factors, perhaps cultural dislocation through immigration, or to the lower incomes and education levels of Latinos compared to whites and other groups.

Doctors are focusing, for example, on what appears to be a heightened risk for Latinos from Alzheimer's disease. Researchers think diabetes and obesity contribute to dementia, and Latinos are indeed getting Alzheimer's at a younger age than other groups. "We are concerned that the Latino population may have the highest amount of risk factors and prevalence, in comparison to the other cultures," Maria Carrillo of the Alzheimer's Association told the New York Times.

Cultural complications
That Hispanics get Alzheimer's younger while also living longer than others could add to the future costs of dementia. "This is the tip of the iceberg of a huge public health challenge," added Yanira L. Cruz, President of the National Hispanic Council on Aging. "We really need to do more research in this population to really understand why is it that we're developing these conditions much earlier."

Experts say some traits of Hispanic culture also can complicate health issues such as Alzheimer's. Family members more often take care of Latino elderly, and while family care is seen as helping Hispanics live longer, it also can delay the diagnosis of dementia.

Language is another barrier to good health care, particularly for older immigrants who may never learn English. When Hispanics do decide to see a doctor, it can be a challenge finding one fluent in Spanish.

Hispanic elderly also face the broader issues that bedevil all Latinos as a group: overall, Latinos have the lowest per-capita incomes and education levels of any group in the United States. Low savings rates leave Hispanic elderly to depend more on government assistance, particularly Medicaid and Social Security. Yet government programs, in particular, are notorious for cultural insensitivity.

Cultural competence
Elderly advocacy groups, including AARP, are stepping up efforts to help Hispanic seniors. AARP publishes a magazine aimed at Latinos, including a Spanish-language edition, and regularly convenes a council to study issues that are important to Hispanic elderly. The National Hispanic Council on Aging coordinates local affiliates while promoting Latino views in Washington, D.C., and offers courses to health care workers to improve their "cultural competence" in dealing with elderly Hispanics.

One approach would make social services more "family centered." That includes lowering the barriers between traditional agencies, such as those involved with child services and health care, to deliver more integrated support to families, neighborhoods, and communities -- all of which are particularly important to Latinos and other ethnic groups.

Latino culture also brings advantages to the silver years. Many Hispanic immigrants, for example, more easily embrace one remedy for boomers struggling to make ends meet: working longer into what has traditionally been retirement years in America. Mexican immigrants, who make up the vast majority of U.S. Latinos, often grew up on farms where families cared for the elderly and expected them to work when they could, report researchers at the University of Notre Dame's Institute for Latino Studies.

Stopping work at an arbitrary age is an idea that emerged from factories and bureaucracies, the researchers say: "Mexican immigrants coming from rural backgrounds generally do not arrive with a concept of retirement."

Next in "Infinia on Aging:" Seniors surviving in suburbia.