Many people have heard of the pea soup-thick London fogs of the late 19th and early 20th centuries, the coal smoke-choked mists that plagued the U.K. capital's citizens with respiratory illnesses, culminating in the deaths of thousands during the Great Smog of 1952. But it wasn't long ago that similar conditions existed in the United States.

Pittsburgh might be known as the "steel city" for its legendary production of that iron alloy (which carries its own environmental hazards), but it's been called other names -- such as "Hell with the lid taken off" or "the capital of Hell" -- for its air pollution.

The Smoke Control Lantern Slide Collection, housed in the archives of the University of Pittsburgh, documented urban pollution in the steel city at its worst.

As the collection's website notes, the city's legendary sootiness led Anthony Trollope, a Victorian-era British novelist and native Londoner, to remark that Pittsburgh "... without exception is the blackest place which I ever saw."

Derived from factory pollution, and like London, from the burning of coal as fuel in home furnaces, Pittsburgh's black smog at its industrial peak during the 1940s and 1950s was once so thick that it could block out the midday sun.

The photos in the collection serve as a cautionary tale for the lack of environmental control over the use of fossil fuels, but they also carry an inspiring story of civic involvement.

Prior to World War II, grassroots citizen groups in Pittsburgh sought pollution controls for trains, steel manufacturers, and home furnaces, but the coming of the great conflict -- and its need for steel -- put those concerns on the back burner. Smoke controls were finally enacted in 1946.

While air quality in Pittsburgh has improved greatly since the days when coal smoke blocked the sun, the city still struggles with air pollution. The 2012 State of the Air ranking of 277 U.S. metropolitan areas by the American Lung Association placed Pittsburgh at sixth worst in the country for year-round and short-term particle pollution.

As demonstrated recently by events in China, juggling industrial growth and air pollution can be a delicate subject. 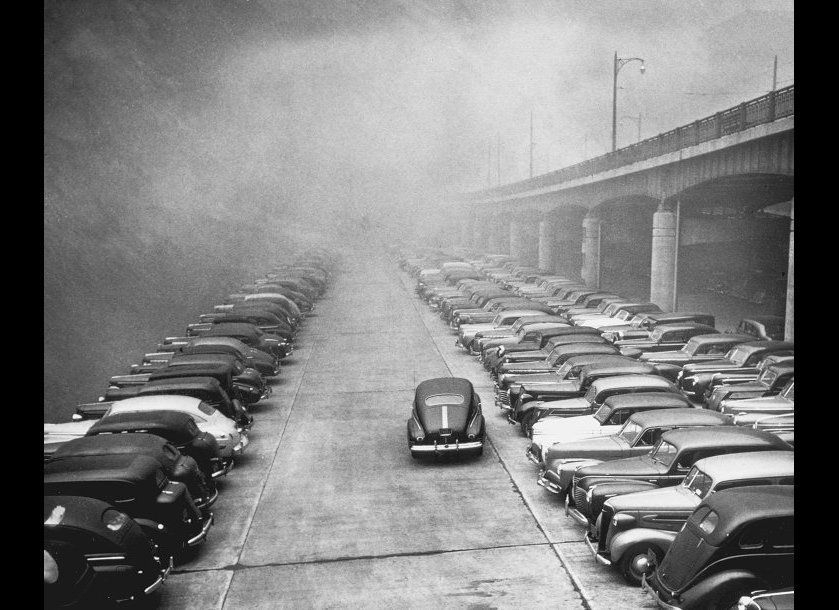