As state after state -- most recently Utah and Oklahoma -- battles to legalize gay marriage, opponents of the push for equality continue to argue that marriage itself has remained a static institution that would be destroyed if redefined. But there's a big flaw in that logic. Because while marriage has existed as a central element of life in nearly every global culture in recorded history, its definition has already been changed. Repeatedly.

Before legal systems and international economies, noble and ruling classes used marriages instead of treaties to create diplomatic and commercial ties. "You established peaceful relationships, trading relationships, mutual obligations with others by marrying them," writes Stephanie Coontz, author of Marriage: A History. Until recently -- in the scheme of things, anyway -- marriage was defined almost exclusively by these advantageous partnerships, when people began openly questioning them.

So for anyone who claims that gay marriage will defile "traditional" marriage's supposed long-standing and unchanged legacy, have a look at just a few of the ways marriage has already been redefined over the years.

Like most ancient governing bodies, Athens didn't legally define marriage for its citizens. Producing offspring was pretty much the only reason to get hitched -- as one man put it, "We keep hetaerae (courtesans) for pleasure, concubines for the daily care of our body, and wives for the bearing of legitimate children and to keep watch over our house" -- because the state did control movement of wealth through inheritance. It was so important to keep property within the family, Coontz writes, that a girl whose father died without leaving another male heir could be forced to marry her nearest male relative, even if she had to divorce her current husband.

Marriage wasn't even considered the most ideal union, at least according to the elite members of society. That honor went to -- drumroll, please -- homosexual partnerships, since married men and women weren't expected to provide emotional fulfillment for one another.

Indigenous peoples: Life is hard, so marry whomever you need to.

In some cultures, men took several wives so they could help each other with all the work needed to sustain the family. Women in Botswana had a saying: "Without cowives, a woman's work is never done," Coontz writes. In Australia's harsh natural environment, Aboriginals arranged marriages for children based on strategic accessibility of land, so the clan would have food and water wherever they traveled.

Some Native American tribes highly respected "two-spirit" individuals, or those who could do the work of men and women. Two-spirit people could be married to someone of the same sex, since all the tasks needed to maintain the household could be performed easily, making marriage more of a labor concern than a gender concern.

Ancient China: Why restrict marriage to the living?

Confucian philosophers argued that the strongest family bonds existed between fathers and sons, or between brothers, Coontz writes. Marital bonds were a far second to familial ones, so much that a son could be beaten for siding with his wife (who was made to move in with her husband's family) and not his father.

One of the stranger marriage traditions to come out of any society is undoubtedly China's practice of "ghost marriages." To keep unmarried deceased relatives from being lonely in the afterlife, family members married them off -- to another without a pulse. The two were united in a graveside ritual, and the new in-laws kept in touch afterward. Despite being banned in China today, ghost marriages still happen.

Rulers of Alexander the Great's splintered empire used marriage as a political tool, Coontz writes, taking more than one wife in order to establish alliances with other kings. Unlike Botswana's co-wives, though, Hellenistic co-wives typically hated one another, since each was seen as a threat to the others' ascension to power. Children schemed with their mothers against step-mothers. Siblings schemed against siblings. To produce heirs that could remove all doubt of legitimacy, some brother-and-sister marriages also occurred.

Lower classes, without much wealth at stake, had a bit more freedom in choosing a mate. But marriages were still mostly seen as business contracts, since independent single life was nearly impossible with all the labor needed to plough the fields and keep up the home. Slaves, who didn't have their own homes to make, were thus forbidden from marriage.

Ancient Rome: Let's use our wives as political currency.

The end game of a Roman marriage, as in so many other cultures, was to produce legitimate children. Men were seen more as managers of Roman families, rather than members themselves, Coontz writes. Aside from needing official permission to marry foreigners, however, the state was not concerned with who married whom. Statesmen even married off their own wives in order to form alliances with other ruling men -- Marcus Porcius Cato did just that when he divorced his wife Marcia and arranged her marriage to his friend Hortensius. We wonder how Marcia felt.

"Many early Christians," Coontz writes, "believed that marriage undermined the rigorous self-control needed to achieve spiritual salvation." Celibacy was therefore preferable over marriage, but sex was tolerated for purposes of procreation -- so long as you weren't marrying your cousin, second cousin, stepmother, stepdaughter, widow of your uncle or brother, or anyone within seven degrees of separation from yourself. (Best of luck figuring that out.)

For the rich, marriage was again a political arrangement between two families who wished to cement their ties and merge assets. Queens arranged marriages for siblings, relatives and ladies-in-waiting in order to create international support networks for themselves. In the 12th and 13th centuries, people believed that "love cannot exert its powers between two people who are married to each other," as the Countess of Champagne once wrote. Adulterous relationships, on the other hand, were the pinnacle of romance.

To the Catholic Church, marriage simply consisted of a man, a woman, mutual consent, consummation, and -- very important -- parental approval. Parents had so much control over marriage negotiations that in 1413, two Derbyshire fathers signed a contract in which the bride's name was left blank, because one father hadn't decided which daughter to marry off.

The plebs used marriage as a way of arranging plots of land, which were doled out in random strips. It was more ideal to have multiple strips next to each other, so you might hope your daughter could marry the neighbor's son. Traders and artisans in the same business often married each other to share supplies.

In 1563, the Catholic Church decreed that marriage was a sacred ritual to be performed in a church. They talked about doing this a few centuries earlier, Coontz says, but it would have rendered a lot of marriages invalid, because no one got married in a church.

Meanwhile, Protestants declared clergymen's right to marriage while warning not to love one's spouse too much. A lot of people were still weirded out by the concept of affection in marriage -- one Virginia colonist wrote that a female friend was "more fond of her husband perhaps than the Politeness of the day allows." (In his defense, PDA does suck.) Throughout pre-Industrial Europe, though, historian E.A. Wrigley wrote that marriage "is better described as a repertoire of adaptable systems than as a pattern."

Enlightenment: Love in marriage is kind of important, too.

Salon thinkers started ruminating on marriage and decided apathetic partners were a sad thing. Two lovebirds should have the freedom to choose their union, they thought, as opposed to parents making marriage decisions on their behalf, elevating the importance of companionship and cooperation. Marriage started to become the sort of private partnership we recognize today.

Critics, of course, claimed that this equality between partners was the destruction of marriage as civilization knew it, because it undermined the male authority that glued households together. Silly women!

Victorian Era: Good wives belong to the "cult of purity".

When Queen Victoria walked down the aisle in virginal white lace, she helped change the perception of women from the "lustier" sex to the innocent, asexual one. Ideal marriage occurred between a man and a woman with the strongest of morals. When sex itself began to be seen as too indecent for nice ladies, who were strongly encouraged to repress feelings of lust, men found it less stressful to just hook up with prostitutes.

Young people rebelling against their stodgy Victorian-era elders did so by flaunting their youth and hotness, so in addition to marrying for love, ideal couples around the turn of the last century also had satisfying sex lives. By the end of the 1920s, Coontz writes, intimacy between two married people had become even more important than ties with parents. Meanwhile, critics penned newspaper columns titled, "Is Marriage Bankrupt?" and predicted that the increasing focus on sex would lead to the institution's demise in less than 50 years' time.

The pre-WWII era saw a "marriage fever" that resulted in a post-WWII obsession with the nuclear family. Marriages typically consisted of a male breadwinner, a stay-at-home mother and a couple of kids -- and unions were lasting longer on average than ever before. There were still laws, however, prohibiting white people from marrying black people, Mongolians, Hindus, Indians, Japanese, Chinese or Filipinos. Laws preventing people with mental disabilities from marrying also stayed on the books -- and even remain today -- though they went largely unenforced after the middle of the 20th century.

Feminist groups fought to ease pressure on women to find a man and settle down, helping to cement the idea of marriage as a partnership between equals. Marital rape was outlawed. States began repealing laws preventing some marriages -- bans on interracial marriages were declared unconstitutional by the Supreme Court in 1967 and marriage of prison inmates was legalized in 1987 -- as the idea of a perfect wedding became more and more of a billion-dollar commercial enterprise.

In 2001, the Netherlands became the first in a growing number of nations to grant same-sex couples the right to marry.

Correction: A previous version of this article stated that the mentally disabled were granted the right to marry in 1950. In fact, such laws do remain on the books in some states, even if they are seldom enforced. Language has also been updated to more accurately describe the effect of the Supreme Court's 1967 ruling against bans on interracial marriages. 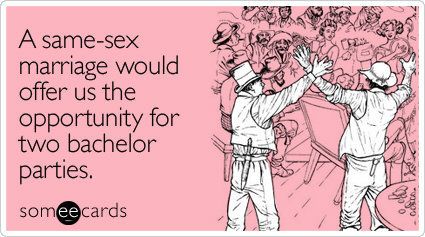