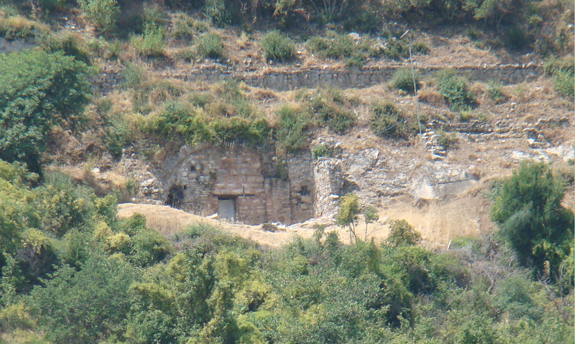 On the mid-Aegean coast of Turkey, half-way up the northern slope of the Bülbüldag and high above the excavations of ancient Ephesus, is a long, narrow shrine-cave. On your immediate right as you enter its 50-foot length is a fresco depicting a scene from the Acts of Thecla, a set of stories now preserved as Chapters 1-43 of the second-century Acts of Paul. (Google: "Early Christian Writings.")

Three characters are identified by name on that fresco. Paul is seated in the middle addressing Thecla to viewer left. She is a virgin -- hence unveiled -- but house-bound -- hence nubile. An elegantly veiled matron, her mother Theoclia, is to viewer right. 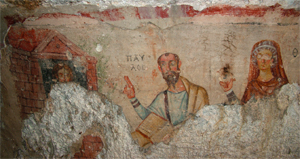 Both the right hands of Paul and of Theoclia are raised in identical authoritative teaching gestures. Since Paul lacks any halo, my inexpert opinion would date that fresco to the 400s.

We saw, with slavery in my previous post, that the de-radicalization and re-romanization of Paul was already well underway in those post-Pauline letters attributed to him. So also here with regard to gender. Those two women -- poised on either side of Paul -- represent two linked controversies which would change the radical Paul of Romans, 1-2 Corinthians, Galatians, Philippians, 1 Thessalonians, and Philemon, first into the conservative Pseudo-Paul of Ephesians, Colossians, and 2 Thessalonians, then, finally, into the reactionary Anti-Paul of 1-2 Timothy and Titus.

Patriarchy. One controversy is represented by Theoclia to Paul's left. As noted above, her right hand was originally raised in a teaching gesture every bit as authoritative as that of Paul. But it was later both gouged out and burned off. Furthermore, since only her eyes are obliterated, that erasure was not just general iconoclasm but individual assault. She is represented, in other words, as a woman teaching with authority whose image is then effaced with prejudice. This is simply a visual image of that reactionary post-Pauline and anti-Pauline command that "no woman [is] to teach or to have authority over a man; she is to keep silent" (1 Timothy 2:12).

That is not, of course, the view of the historical Paul whose letter to the Christian communities of Rome was delivered -- that is, read and explained -- by a woman named Phoebe, an administrator of a house-church near Corinth (Romans 16:1-2). Neither is it the position of the historical Paul who described the woman Junia as "prominent among the apostles" (Romans 16:7) -- an "apostle" is somebody "sent" by God with authority to found new Christian communities.

Celibacy. The other controversy is represented by Thecla, to Paul's right. In the story of that scene from the Acts of Thecla, Paul is advocating celibate asceticism. Recall, for comparison, that his contemporary, the Jewish philosopher Philo, described women and men who lived similar lives in the desert outside Alexandria. Not, of course, because sex was evil in any way, but because they could not live lives of justice and equality in the midst of urban family pressures (On the Contemplative Life 1.2; 2.17; 9.70).

Thecla hears Paul's challenge and, at about thirteen years of age, she rejects her family-appointed suitor and any possibility of marriage. She refuses to be passed from the authority of one male -- her father -- to that of another male -- her husband. Thecla's option for virginal celibacy is a far more profound rejection of patriarchal power than that of Theoclia's claim to teaching authority.

Thecla, therefore, is condemned to beasts in the arena. But then something extraordinary happens. The crowd splits, not just between Christians -- for Thecla -- and Pagans -- against her. It splits between Women -- for her -- and Men -- against her. In fact, that story is not just early Christian feminism but early Christian femalism because a lioness protects her against a lion. And the Women confuse the animals' sense of smell by casting their perfumes into the arena.

In that cave-shrine scene, those two women, Thecla and Theoclia represent together the full legacy of Pauline radicalism which reactionary letters such as 1-2 Timothy and Titus seek rather desperately to cauterize and contain. Those anti-Pauline letters want Christian teachers to be male and not female (1 Timothy 2:8-15) but they also want those males to be normal not ascetic, married not celibate, and, to be absolutely sure, they want to see their children (1 Timothy 3:1-13; Titus 1:5-9).

The historical Paul is being pulled -- kicking and screaming -- away from Christianity's radical past and into Christianity's Roman future. As with owner and slave so also with male and female, hierarchies rejected by Christian radicality -- in, for example, Galatians 3:26-28 -- are being retrofitted into Roman normalcy. Once again, then, Constantine here we come.