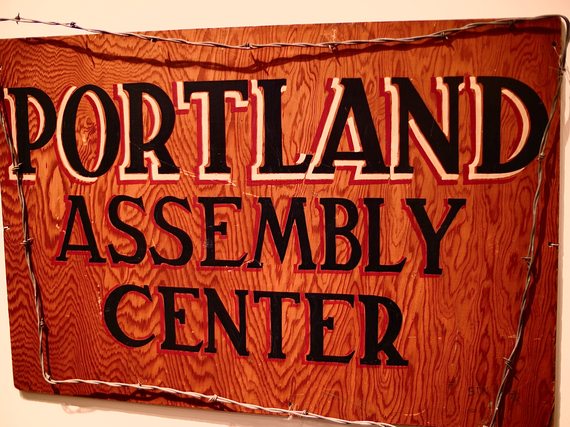 A recent visit to Portland, Oregon made me realize clearly the dilemma of the Asian American story -- more accurately in the plural, stories. It is the constant choice between the positive and the negative. My wife and I stopped by both the Oregon Nikkei Legacy Center downtown and the Oregon Historical Society across from the art museum. Each revealed the dichotomy of Asian American experiences.

My late father-in-law and my late mother-in-law exemplified the election of optimism versus pessimism. He was an immigrant from Japan; she was native born, from Sacramento, the capital of California -- she always referred to it, fondly, as having been in her childhood "a one cow town." During World War II, they were locked up in an internment camp (Tule Lake). They were quickly given an opportunity to return to freedom, thanks to his superior language skills.

They were offered work plus housing. He could serve as a translator for the United States Army; she would become a domestic for the officer who sponsored them. They accepted. The happy interpretation is that they were able to return to civilian life, my father-in-law even starting a new career as a cartographer with the military that would last long after V-J Day. The less happy interpretation is that they had no real options other than to be exploited.

They were not alone. The Nikkei Legacy Center ("Nikkei" referring to people of Japanese descent) explained how similar openings were available to those who had done nothing wrong other than share a bloodline with an enemy. The program of agricultural leave promised, and more or less delivered, liberty for those willing to toil in the fields, taking on the hard tasks that others did not wish to do. They helped feed other citizens -- who in turn shunned them.

The Nikkei Legacy Center features a permanent display about life in a robust Japantown before World War II. A map showed all the businesses: general store, barbershop, and traditional bathhouse. Another panel portrayed the rural farms from which immigrants would journey in for the comfort of society. Dioramas and realia (the academic term for everyday objects that have been preserved) also documented the effects of FDR's Executive Order 9066. After Pearl Harbor, the military rounded up everyone of Japanese heritage on the West Coast and sent them to makeshift prisons out of fear of disloyalty. There was no due process.

In an instant, Nihonmachi (the Japanese name for the neighborhood) was dismantled. As in Los Angeles and San Francisco, it was emptied of its residents.

The backroom highlighted the photographs of Russell Lee. While Ansel Adams and Dorothea Lange received greater attention for bearing witness to the failure of our principles, Lee was another artist for the government who recorded hundreds of pictures of Japanese Americans making the best of their situation. They recreated communities in the desert, with schools, churches, hospitals, newspapers, baseball games, and dance nights. In the "uprooted" images from agricultural leave, they are depicted as productive, seemingly satisfied that they are able to contribute to the national effort -- like my father-in-law, some found permanent livelihoods as a result of the temporary jobs. (The need for labor, not incidentally, was a reason that leaders in Hawaii, a territory squarely within the war zone and not yet a tourist destination, did not insist on shipping off much of the population upon which the local economy depended.)

Likewise, Chinese Americans suffered. There is ample evidence of the mistreatment, official and otherwise.

Over the years, I have been honored to offer a bit of behind-the-scenes advice on three museum exhibits about Chinese Americans, for the historical societies of my hometown of Detroit, as well as Washington, D.C. and New York City. For each, the curators have faced the same challenge of balancing between discrimination and ongoing disparities on the one hand and achievement and eventual acceptance on the other hand. Progress brings irony. Chinatowns can flourish, without actual Chinese.

As the world around them changes, museums continue to be trusted. As institutional authorities, they are assumed to be objective. A museum does more than attest to our memories. For people who have forgotten, or who were never aware, a museum defines the limits of our understanding.

Thus framing is crucial, but it is not automatic. It reflects deliberation, or it should. A perspective is established by each artifact that is selected, the text that is written, and the proportions of space dedicated to specific details.

Portland presented a traveling version of the New York City show. The compromise was to entitle the whole, "Exclusion/Inclusion." A question mark would have made it even more explicit. The past unsettles. We try to make sense of it.

Chinese -- Japanese and other "Orientals" after them -- were excluded, in formal terms that would embarrass most people nowadays. Even if they had come legally, they were barred from naturalization, for racial reasons that could not have been more derogatory, more egregious. They were even driven out, through rioting, lynching, and mass murder.

They struggled to be included. The 1965 Immigration and Nationality Act eliminated the worst aspects of racial nationalism, although that likely was not the intent of its legislative sponsors. Since then, Chinese Americans, and Asian Americans more generally, have adapted and been integrated.

That means a narrative that is unduly negative risks alienating its subjects. It likely will anger others who expect, even if erroneously, a display of gratitude on the part of presumed newcomers. An account that is overly positive will be galling to those who continue to endure bias. It might arouse resentment among others who hope that the so-called "model minority" will receive a comeuppance, deserved for having received more than their fair share.

My father-in-law, a modest man, demonstrated resilience, a virtue that rarely attracts acclaim. He gave no indication of being aggrieved about what had happened to him since leaving his island village on the other side of the Pacific Ocean -- other than toward an older brother-in-law, who had relieved him of the savings he had brought to the new world. When I interacted with him, I marveled at his attitude. His good cheer likely contributed to his well being.

Psychologists advise us along these lines. Better to see the glass half full than half empty. That might be too glib, in its requirement of willful disregard of unpleasant facts. Not everyone is prepared for such discipline. Perhaps we hope, because it is how we cope.

The triumph of Japanese Americans and Chinese Americans is that their successes are interpreted as the American Dream. They are ordinary rather than extraordinary. Portland, among the most homogeneously white major cities in an increasingly diverse nation, is not where one might expect enthusiasm about them. People of all backgrounds, however, are coming to learn about these minority populations, with an earnest curiosity. A generation ago, museums might not have deemed the themes of Japanese Americans or Chinese Americans worthwhile or potentially popular. They -- we -- have had their setbacks, but they -- we -- have made progress toward the ideals that all of us celebrate.

That is why people the world over continue to look to our nation, a great experiment of democracy. We own our history.

Author, Yellow: Race in America Beyond Black and White