Cate Lineberry is the author of THE SECRET RESCUE: An Untold Story of American Nurses and Medics Behind Nazi Lines ($27, Little, Brown)

For nearly four decades, the United States has honored its nurses with National Nurses Week, held between May 6 and May 12 -- the birthday of celebrated British nurse Florence Nightingale. Considered the pioneer of modern nursing, Nightingale first garnered fame after she and her team of nurses reduced the death rate at a British base hospital by two-thirds during the Crimean War in the 1850s.

The contributions of female nurses to the American military, however, reach as far back as the American Revolution when women cared for the fallen on battlefields and in camps. In the summer of 1775, Maj. Gen. Horatio Gates of the Continental Army reported to Commander-in-Chief George Washington that, "the sick suffered much for want of good female Nurses." Gen. Washington asked for help from Congress, which approved one nurse for every ten patients in Continental hospitals.

The U.S. military officially added contract nurses for the first time soon after the Spanish-American war broke out in 1898 to help care for the overwhelming numbers of sick as well as the injured. More than 1,500 nurses served, including 250 nuns, 80 African-American nurses, and at least four Native Americans. Twenty-one of these women died after contracting illnesses from those in their care.

Acknowledging these nurses' invaluable contributions in saving lives and hoping to avoid panic the next time war broke out, the Surgeon General established the criteria for a reserve force of nurses in 1899, and in 1901, Congress established the Army Nurse Corps. Seven years later, it created the Navy Nurse Corps.

When the U.S. declared war on Germany in 1917, it had 403 Army nurses and 160 Navy nurses on active duty. By the end of the war, more than 22,000 nurses had served in the military--with several decorated for their actions. Several hundred lost their lives while in service, including many who became victims of the influenza epidemic of 1918.

After the U.S. entered World War II, the American National Red Cross put out a nationwide call for 50,000 nurses to join the Army and Navy Nurse Corps. First Lady Eleanor Roosevelt, whose four sons were serving in the military, pleaded in an editorial in the American Journal of Nursing in 1942 for young women to join.

"I ask for my boys what every mother has the right to ask -- that they be given full and adequate nursing care should the time come when they need it. Only you nurses who have not yet volunteered can give it.... You must not forget that you have in your power to bring back some who otherwise surely will not return."

Some 74,000 nurses served, including dozens who became Japanese prisoners of war and others who found themselves behind enemy lines or in the middle of combat.

Despite the risks these women endured, it wasn't until 1947 that nurses in the Army and Navy Corps were finally granted permanent commissioned officer status, which allowed them to receive the full rights, privileges, and pay that came with their rank.

PHOTO GALLERY
Brief History of Female Nurses in the Military, from the American Revolution to World War II 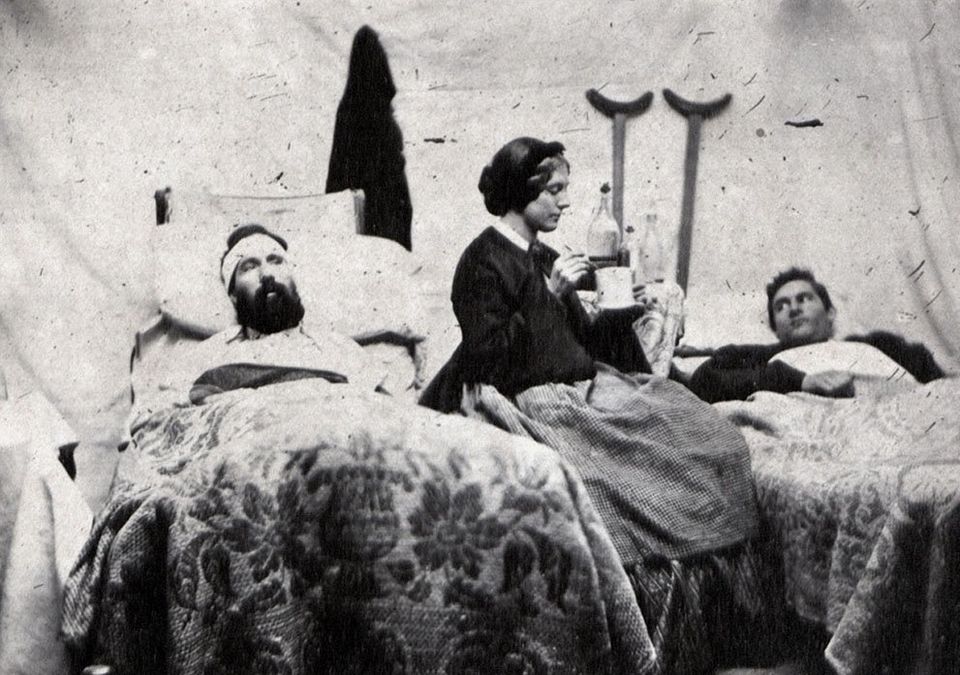 1 / 8
Annie Bell (1864)
During the Civil War, women, like Annie Bell who nursed soldiers after the Battle of Nashville in 1864, tended to troops without any formal training and often despite resistance from male colleagues. Though some women volunteered through relief organizations, more than three thousand nurses, including African-American women who were former slaves, served under Dorothea Dix, the first Superintendent of Women Nurses for the Union Army. <em>Photo: Courtesy of U.S. Army Center of Military History</em>