Getting "fat" used to give us a genetic edge: When food was scarce, we needed to store backup reserves of energy, because we couldn't always guarantee when or where we'd find our next meal.

"This ability to store surplus fat from the least possible amount of food intake may have made the difference between life and death, not only for the individual but also -- more importantly -- for the species," Garabed Eknoyan, M.D., of the Baylor College of Medicine, wrote in a 2006 history of obesity. "Those who could store fat easily had an evolutionary advantage in the harsh environment of early hunters and gatherers."

As our meals became more and more reliable -- and our daily responsibilities more and more sedentary -- the body's physiological drive to store fat became more of a disadvantage. Today, nearly 35 percent of American adults are obese, and we know that extra pounds up the risk of innumerable health concerns, including cancer, diabetes, heart disease, arthritis, sleep disorders and even infertility.

In the 1980s and 1990s, archeologists unearthed a number of stone sculptures they deemed hundreds of thousands of years old, dating anywhere from 230,000 to 500,000 BC. The stone sculptures were given names, including the Venus of Berekhat Ram and the Venus of Tan-Tan, and were taken to be evidence that obesity must have existed among our very earliest human ancestors. However, upon closer examination, other experts argued the stones were simply shaped by nature over the ages.

In 1908, a stone figure known as the Venus of Willendorf was discovered. It depicts a decidedly obese woman decidedly not formed by nature, and is thought to date to as far back as 25,000 B.C. "The people who made this statue lived in a harsh ice-age environment where features of fatness and fertility would have been highly desirable,” PBS reported.

Even the ancient Greek physician Hippocrates, commonly referred to as the father of medicine, commented on the health risks of obesity during his lifetime, writing: "The men lack sexual desire because of the moistness of their constitution and the softness and coldness of their bellies. ... In the case of the women, fatness and flabbiness are also to blame... sudden death is more common in those who are naturally fat than in the lean," according to a Lancet report.

Everything from our attitudes toward the large to rumored treatments for obesity have dramatically changed over time:

Experts currently recommend losing weight slowly and steadily, on average about one to two pounds a week, by a combination of healthy eating and regular physical activity. And every little bit counts: Even among overweight or obese people, losing just 5 to 10 percent of a person's total body weight has been linked with health benefits. 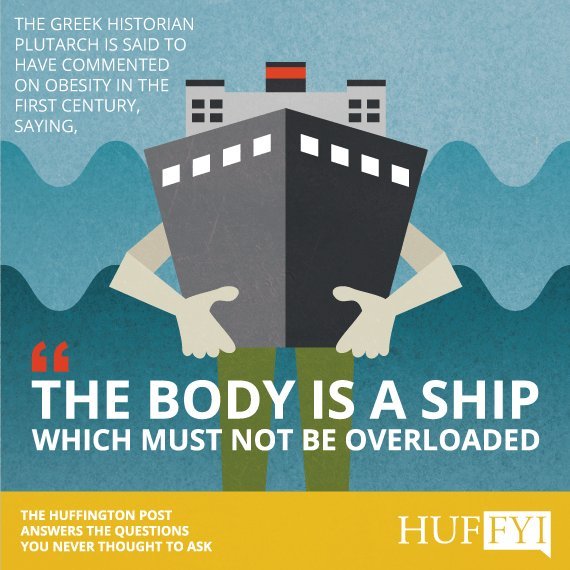 Still, others argue that the overweight and obese are an example of a very limited number of people the general public still finds it acceptable to shame. "Our thin-obsessed society firmly believes that fat people are at fault for their size and it is politically correct to stigmatize and ridicule them," says the National Association to Advance Fat Acceptance's website. "Fat discrimination is one of the last publicly accepted discriminatory practices."