When the Illinois Supreme Court ruled the 2013 pension reform law unconstitutional, it left the state with one very big question: how to get $105 billion into the five state public pension funds by 2045?

We may be waiting for quite a while for substantive discussion on how to address that challenge. At the moment, the leaders in Springfield are occupied in not addressing the budget crisis that slowly is shutting down state government.

In the meantime, there's a lot to be learned from studying the long, tortured history of the Illinois pension crisis. And here's a surprise: This is not a boring lesson. For nearly 100 years, public pension funding has been a political hot potato to be held just long enough until it can be passed down the line to the next governor, the next General Assembly, the next generation's taxpayers.

Funding pensions in Illinois has been anathema for decades to the operating theory of most politicians, who greatly prefer to spend money today on things voters can see and love immediately than to sock it away in pension systems. Elected officials get a lot more bang from state budget bucks that lead to ribbon cuttings than from those that bring only nods of approval from pension actuaries.

How Illinois got into its worst-in-the-nation pension mess was the topic last week of a panel discussion at the City Club of Chicago that featured four panelists with unique perspectives on the causes of the state's $105 billion problem.

Journalist Dave McKinney of Thomson Reuters, who covered Springfield for the Chicago Sun-Times from 1995 to 2014 and wrote about the history of the pension crisis in a special report for Crain's Chicago Business, said lawmakers sometimes did not understand the financial consequences of the pension bills before them.

"Over and over again what I was seeing was that the numbers that were put in front of legislators proved to be way off as they were studied longer... What we have, clearly, is a $100 billion debt right now and no plan to pay for it."

Eric Madiar, a Springfield attorney and lobbyist who researched pensions extensively while serving as chief counsel to Senate President John Cullerton, emphasized that the chronic, long-term failure of the General Assembly to make adequate payments to the pensions was the main cause of the current situation:

"Pension funding has historically been a political football and something not to worry about until tomorrow. And so past governors and General Assemblies really only made the contributions after they had made contributions on things that were politically popular... Simply put, pension funding for the system was shortchanged really as a way to stave off the pain of tax increases or service cuts."

"Our current pension disaster cannot be blamed on benefit increases or salary increases. Between 1985 and 2014 pension unfunded liabilities grew by $97 billion. Benefit increases only account for 8 percent or $8 billion of that growth. Pay increases were actually less than what actuaries assumed they would be and actually helped bring down the unfunded liabilities by about $1.3 billion. The state's failure to properly fund the pension system, however, accounts for 49 percent, or ($47 billion) of that growth. So simply put, the main reason we are in this mess is because of insufficient pension contributions."

Sheila Weinberg of Truth in Accounting asked and answered a question that's probably occurred to many Illinoisans: "How can they balance the budget and put us into debt at the same time? Well, they use political math."

You can read the rest of this article and watch the full video of what panelists had to say last week at Reboot Illinois. 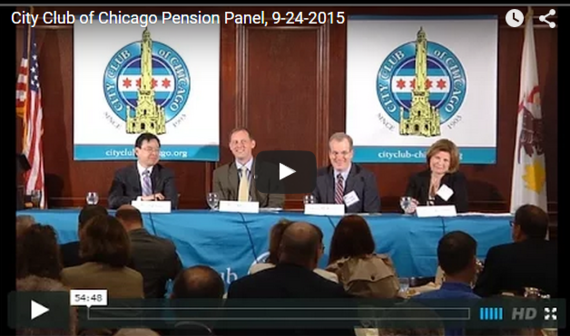 NEXT ARTICLE: Cullerton and Radogno discuss the state budget impasse on "Chicago Tonight"