Excerpted from Trident K9 Warriors: My Tale From the Training Ground to the Battlefield with Elite Navy SEAL Canines by Michael Ritland and Gary Brozek ($25.99, St Martin's Press)

Whatever warlike purpose dogs have served, from sentry duty to detection, they have a long history of being employed in some capacity.

As far back as ancient Egypt (if we are to believe that some of their artwork is accurate), dogs were used as both offensive and defensive forces. Some Egyptian murals depict dogs being unleashed on Egyptian warriors’ enemies. Similarly, the Greeks recorded a dog’s contributions on a mural celebrating the Battle of Marathon against the Persians. Written accounts by the Roman writers and historians Plutarch and Pliny exist, and Strabo, a Greek historian, described the dogs being “protected with coats of mail.”

From their use by nearly every ancient city-state through Attila the Hun, William the Conqueror, and succeeding generations of English rulers and leaders; the Spanish conquistadors; Napoleon; and Frederick the Great, dogs have served loyally. A frequently cited example of war dogs and their loyalty is Napoleon’s writing in his memoirs, “I walked over the battlefield and among the slain, a poodle killed bestowing a last lick upon his dead friend’s face. Never had anything on any battlefield caused me a like emotion.” Today, many of us think of the French poodle as the epitome of the spoiled, prissy canine, but poodles have a long history as military working dogs.

Here in North America, Native Americans also used canines as watchdogs. Like several other groups, they also used a dog’s strength and endurance to their advantage. Dogs hauled packs and served as draft animals, just as horses did. European settlers and their successors used dogs against the Indians. Benjamin Franklin was involved in organizing the Pennsylvania militia against the Native Americans and wrote a letter proposing how they might be used, based on his knowledge of how the Spanish utilized them in Mexico.

Because many of the MWDs [Military Working Dogs] we use today can have their lineages traced back to Germany and the war dogs of that nation, I was particularly struck by stories of how the Sanitatshunde— “sanitary dogs,” as the Germans referred to these canine Red Cross workers—were trained to find the wounded among the battlefield casualties that lay littered across a no-man’s-land. These dogs were trained to go out into that legendary zone, with water or alcohol in canteens and with packs strapped to their bodies, to offer the injured what was often some small comfort before the men died. More important, the dogs were sent out to identify the location of the wounded, most often at night, and return with some token—a cap, a helmet, or other identifier—and then lead a handler to the site of the wounded man so that he could be recovered. This kind of human detection and the training methodologies and signals humans and canines shared to communicate a find are all very much like what we do today with our MWDs.

It’s estimated that the Germans used a total of nearly thirty thousand dogs during World War I. They had six thousand on the front lines and four thousand in reserve at the beginning of the war.

Because we didn’t have a long history of using dogs in battle, and possibly because we entered the war later and didn’t see all the other ways that other countries utilized dogs in World War I (as ambulance dogs pulling two-wheeled carts, for example), our use of canines as we entered into the War to End All Wars was essentially nonexistent. We eventually used dogs trained by the French and British, but a program to train American dogs and to supply our troops with them was never implemented. We did, however, supply the French army with four hundred dogs, which served in the alpine regions as draft animals, helping to haul artillery shells with far greater efficiency than humans, mules, and horses could.

Several influential members of the canine community, including the director of the American Kennel Club, got together and established the Dogs for Defense (DFD) organization in 1942. It brought together professional and amateur trainers and breeders as well as private individuals who wanted to support the cause of utilizing dogs to a greater extent than ever before as a part of the American military. At first their efforts were met with resistance. The American military was reluctant to let civilians take the lead in establishing any kind of policy. Eventually, those barriers were overcome when the need for protection of military depots around the country became more of a priority. In July of 1942, Secretary of War Harold Stimson issued a directive calling for the quartermaster general to train dogs to serve a variety of functions beyond sentry duty. This would include search and rescue, hauling, detection/scouting patrols, and messengering. All the branches of the armed forces received the orders, but it was up to them to decide individually how many dogs to recruit and how to utilize them.

The U.S. Army Quartermaster Corps (QMC) took over from the Plant Protection Branch by September of 1942. The program, unofficially, was known as the K9 Corps early on, and the army adopted a part of that name with its K9 Section. Eventually the quartermaster general announced that the United States would need 125,000 dogs for the army, navy, marines, and Coast Guard combined. American citizens had already joined breeders and trainers in “volunteering” their dogs as part of the DFD programs. DFD had been providing dogs for the army, while the navy and marines briefly relied on private individuals and sources. All four branches, including the navy, eventually turned to the DFD as a source for suitable recruits.

The DFD established regional centers to accept the donations, and the dogs were considered gifts, with no promise made that the dogs would be returned—except if the dogs didn’t meet the basic requirements. In the first two years, the DFD received forty thousand dogs; eventually about eighteen thousand passed initial inspection, and ten thousand actually saw duty. While those numbers may not seem particularly impressive, they are when you consider that this was an entirely volunteer program staffed by people whose only desire was to aid the war effort.

By August of 1942, dogs were patrolling the beach with their Coast Guard handlers. By the end of the first year of the combined efforts of the quartermaster general’s office and the DFD, eighteen hundred teams were doing that work, with another eight hundred handlers being fully trained by the end of the war. Though initially the quartermaster general’s office issued an Army Technical Manual bulletin identifying thirty-two potential breeds and crosses as candidates, by the end of 1944 they’d narrowed that field of candidates to seven breeds: “German shepherd, Doberman pinscher, Belgian sheepdog, collie, Siberian husky, malamute, and Eskimo dog.”

The main function of these Coast Guard units was eventually fully clarified. The Coast Guard was responsible for spotting trouble and reporting it. The army was in charge of protecting the coastline and turning back any hostile troops. By May of 1944, it became clear that no hostile invasion was forthcoming and that any acts of sabotage were unlikely. The coastline-protection program was drawn down, with the dogs then being transferred to the army.

From the jungle heat and humidity of the Solomon Islands to the frozen tundra of Alaska to the fields and forests of Europe, dogs served throughout World War II. (It should be noted that those Alaskan Search and Rescue operations resulted in one hundred crewmen being returned to safety.) If their efforts were hampered by anything, it was the lack of proper training, most of which was due to the fact that the time frame was so restrictive and that there was a relative lack of prior experience in training dogs for warfare.

By the time the war in Vietnam began, we realized the various purposes dogs could serve in the military. As a result, dogs engaged in four main activities during that conflict: scouting, tracking, water detection, and sentry work. Water detection isn’t what it may sound like. The navy used dogs to detect the presence of human beings in and under the water in order to defend its bases, ships, supplies, and personnel. I should also add that this kind of sentry and detection isn’t any less important or dangerous than combat duty.

Adapting training and implementation programs from the British Jungle Warfare School, American military leadership employed Combat Tracking Teams. At first separately, and later together, dog, handler, a team leader, a visual tracker, a radiotelephone operator, and a cover man trained to combat the tactics employed by the Vietcong. They had two main purposes: to make contact with the enemy and to detect any recent enemy activity in the area. Learning jungle craft was critical to feeling at home in an environment that was so foreign to these men and dogs.

The CTT units faced the same issues we do today with our SEAL Team dogs and handlers. They train separately for a while and then the SEAL MWDs and handlers have to integrate themselves into the larger force. Just as is true today, the dogs’ natural advantages and skills made that transition easy. With their innate tracking skills honed by additional training, the CTT Labs quickly made the men realize that while they were called “trackers,” they were essentially following the dogs’ lead. The men went from thinking What the hell is that dog doing here? to Why the hell didn’t we always have these dogs? in a matter of a few hours.

Estimates vary, but as many as five thousand dogs and ten thousand handlers served their country from 1964 to 1975. The sad reality is that, with few exceptions, the vast majority of those dogs didn’t return to the United States. The reality of warfare resulted in handlers having to either set their dogs loose to fend for themselves or turn them over to the South Vietnamese army. Either way, it had to be a horrifically painful decision to leave a valued teammate behind. 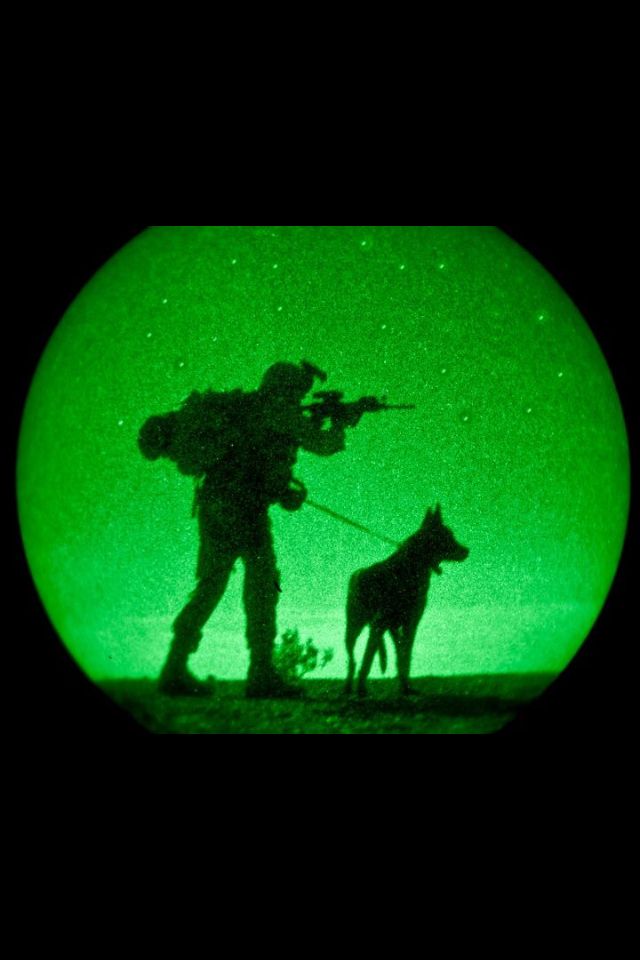