Pauline MacDonald* has done what few writers working in the area of Tibet could, or would, do. She has written about something other than the 'Issue Central' -- the impact of China's hardline policies in Tibet. The on-going horrors and indignities that Tibetans suffer across the plateau is more than worthy of such attention, but MacDonald keeps her eyes squarely on a different segment of the population -- those who in more recent decades have made the perilous journey across the Himalayan ice wall in search of a new life in India.

Most of those whom MacDonald consults for her book left Tibet in the 90s or 2000's. The struggles and perspectives of these 'newcomers' as they are called, sit in sharp contrast to those of the 'settler' Tibetans -- the first wave of refugees in the years immediately after the Chinese invasion of Tibet and their offspring. Although human rights groups have documented vivid accounts from newcomers about their experiences of discrimination, oppression and torture back in Tibet, MacDonald focuses on a different aspect -- their experiences within the Tibetan exiled community itself. 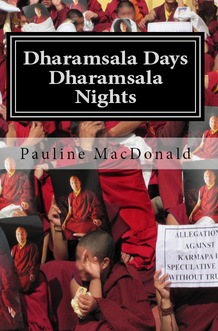 Between 2003 and 2012, she spent a total of three years in Dharamsala, India, the seat of the Tibetan government-in-exile, home to the Dalai Lama and 10,000 of the 130,000 Tibetan diaspora. She came with a particular sensitivity as a Canadian, and quickly began to see parallels between the way that First Nation People in Canada and newcomer Tibetans are stereotyped as social undesirables. But for the Tibetan newcomers this is compounded by the social dynamics of the Tibetan 'cause,' particularly when they fail to reinforce the idealized image of Tibet that their own people expect of them. In Dharamsala Days, Dharamsala Nights: The Unexpected World of the Refugees from Tibet, she explores how this perception of the newcomers by the settlers, has led to a cycle of mistrust, marginalization and neglect and ultimately to a community divided against itself.

...the problems with the ways that escaping refugees have been managed are far worse than I ever imagined. It seemed everyone's interests were being served: the settlers', India's, and China's; the only interests not being considered were those of the recent refugees from Tibet.

MacDonald admits that the situation has improved since the uprisings in Tibet in 2008, which have forged a greater sense of unity among Tibetan exiles. She also insists that the responsibility lies not with the Dalai Lama, whom she says has done what he can to address the problems, but with a disconnected and prejudiced elite. Most writing about Tibetans is generated from a perspective of Buddhism, academia or advocacy. MacDonald is unique in that she comes from none of these fields and is thus not defined by them. Although convoluted at times, her writing is engaging and convincing; deeply personal, occasionally provocative, but always sincere, unpretentious and well-researched.

Through her personal friendships and avid research she explores newcomer attitudes to love, sex, politics, language, food and more. Almost all her subjects are male, due to the vast gender imbalance in the newcomer community, a topic which she examines at length with a keen sociologist's eye. Her astute insights and often hilarious anecdotes introduce us to the hectic but oddly disarming sub-culture of the salai gyals -- Tibetan men who date or marry foreign women. Her observations are brimming with life, humour, earthy sexuality and a cavalier resilience, mixed with equal doses of bitterness, frustration and loneliness. She describes newcomer Tibetans in Dharamsala living in a constant state of fear and insecurity; uncertain of their legal rights -- dodging Indian authorities and rebuked by their own countrymen -- keeping up their spirits with whiskey, camaraderie and more than a dash of bravado.

At times, I found MacDonald overly shocked by her own findings. The Indian government has been enormously generous to Tibetan exiles, after all, even allowing a kind of state within a state to operate within its borders. India is not a signatory to the United Nations Refugee Convention, and although this is hugely problematic, particularly since India is home to one of the largest refuges populations in the world, the fact remains that India is not legally obliged to protect its refugees. She could also have gained a broader perspective if she had spent time in Tibetan settlements in other parts of India, or in the first port of call for Tibetan refugees -- Kathamandu, Nepal. Her descriptions of tensions between local Indians and Tibetan exiles are also rather one-sided, giving the benefit of the doubt to the Tibetans in every instance. But her depth of passion and commitment is ultimately to her credit. This book is a testament to trust. She is able to tell the stories of the newcomers only because they trusted her with them.

MacDonald digs like a detective on a case that no one else seems to want to crack, as she struggles to understand the reasons behind the stark divisions she finds within the exiled Tibetan community. With impressive tenacity she attempts to untangle the dizzying skein of bureaucracy around the legal status of Tibetan refugees. She describes key but under-reported developments, such as the recent remigration of newcomer Tibetans, encouraged by China's sudden (and perplexing) laxity on travel restrictions for Tibetans wanting to return, and spurred by lack of prospects in exile and rumors of improved psopsects back in Tibet. She also links the fewer reports of detention and torture of those returning to an increase in Chinese cyber-espionage. Why go to the trouble of detaining and torturing someone when you can just lift the information straight off their smartphone? The paranoia about Chinese 'spies' among populations of elderly Tibetan pilgrims to India is presented as an ill-informed diversion from this very real and present danger.

This book is about the people who have fallen through the gap between the image of Tibet and ordinary reality. They are neither saintly, nor particularly spiritual, nor are they icons of serenity, compassion and wisdom with an unshakeable commitment to non-violence. Many are drinkers. Some are flirts and fighters. Most are walking wounded. They occupy an obscure nether region of the iconic realm of Shangri-la that Tibet appears to inhabit in the collective consciousness. With great skill and sensitivity, MacDonald ushers us past the bucolic landscapes, chanting monks and smiling yaks, and into its troubled and tangled streets -- replete with romantic dreams and stubborn hopes but stripped of support, opportunity and direction.

Dharamsala Days, Dharamsala Nights is a unique and important contribution to the literature about Tibet. Human rights is, often by necessity, a black and white world. Neither side in a struggle is encouraged to speak to the greys, and there are those who will criticize MacDonald for doing so. But there are many more who are ready for a greyer and more human side to the Tibetan saga, and they will welcome the chance to view a less simplistic picture. "Tell the story of the unimportant people or they will be forgotten," a newcomer urges her. One thing is for certain. If my story wasn't being told, I'd want Pauline MacDonald on my side.

*Pauline MacDonald is a pseudonym. The author states that she chose to write under a pen name to protect the identities of her Tibetan friends and sources.