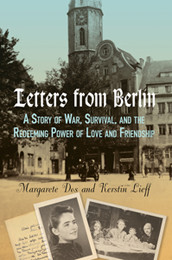 Excerpted from Letters from Berlin: A Story of War, Survival, and the Redeeming Power of Friendship by Kerstin Lieff and Margarete Dos. Copyright © 2013 by Kerstin Lieff. Used by permission of Globe Pequot Press.

Margarete Dos was born in 1924 in eastern Germany, and moved to Berlin just as Hitler came to power. She died in 2005, not long after reciting her life's story to Kerstin Lieff. This is an excerpt from her tale.

My membership in the BDM allowed me to get close to the Führer one day. It was 1939 by now, and it was his birthday. A huge parade, one such as Berlin had never seen, had been planned to celebrate it. Germany had just marched into Prague, and the Sudetenland was to be German once again. There was euphoria everywhere in the streets. To have taken back the land that had been disputed since time immemorial was, for us, a great accomplishment. It meant, for one thing, we would stop repaying France the unbearable debt the Versailles Treaty had required of us and use the money instead to rebuild our own country.

You must understand, we in Germany had had a very difficult time. We had hyperinflation, and everywhere neighbors, people we knew, were out of work. There were long lines of men, men like Bertha’s father, who wanted work but could find no work. The Versailles Treaty that was signed after the Great War wanted to insure we would never be a world power again. Germany was being counted on to rebuild the European infrastructure that had been badly damaged during the Great War, but to do so would take another ninety years. And paying off the debt we owed, as we understood it, would take more money than Germany even had in its gold reserves.

It was, in truth, an impossible task, and it threw our country into chaos. The new German regime stopped making the payments, and Hitler saw to it that our six million unemployed men had work again. People were elated. Men began building new roads and railway lines. There was such enthusiasm, such euphoria, suddenly. There were many people who spoke, in the early days, with excitement about Hitler. Even—you may not believe this—but even Jews. The radio talked about it, constantly. No wonder the air around this day, April 20, 1939, was a festive one.

One day earlier our building manager, Frau Schulz, had come to our door to deliver a flag with the new swastika on it. “It’s been implied by the law, Frau Spaeth,” she told my Mutti when she was asked why. “I believe it even is the law that this flag is hung where it can be seen. I was notified of this. Each house with a window facing the street must hang our new flag.”

When she saw Mutti’s hesitation, she added, “Take it anyway, Frau Spaeth. It was a gift, no one asked for money,” and so Mutti hung it in our parlor window, the one facing the street. On the day of the big parade, I noticed that everywhere—lampposts and houses alike—there was a swastika hanging. Every window was bright, everywhere there were red banners, and the atmosphere was filled with excitement. For me, it was even more so because my particular troop of BDM girls were going to be very near the parliament building, the Reichskanzlei, just there on the Friedrichstrasse.

We were each given a large bouquet of roses, red ones with long stems that we would throw onto the Führer’s car as it drove by. With any luck, I could be in the front line, as I hoped I would be, and I would see this man, the one who said he was going to save our country.

And it did happen. I did stand in the front row, and I was able to throw roses onto Hitler and into his car as it drove past. Tears were in my eyes, and I was euphoric. I cried the same tears Bertha had cried: tears of joy. What joy? I wonder now. I never even knew what all the fuss was about anyway. I’d had a good life, no one in my family had suffered up to that time. We had money, we had food, we even had a telephone when no one else did, and my Papa always had work. But I was moved by the feeling that day, just as so many other people were moved by it, and as the Führer’s car drove past me, I saw him wave, and I even imagined he was waving to me. This man who looked much too small inside his large Mercedes, and I do remember I was surprised to see he didn’t give the Heil Hitler salute at all, merely a bent arm with his hand held as if it hurt—the one I thought might be waving at me.

Later, years later, Papa Spaeth told me Adolf Hitler always had such terrible breath. “It was impossible to be in the same room with him. You would want to find a window somewhere and open it wide and then stand very close to it so that you could at least have a moment of fresh air,” he said. He told me this after the war was over, but talk like this would have been impossible now, and even though my Papa Spaeth would have preferred to serve another man, an egalitarian man, a righteous one, he said nothing. He did what he was supposed to do: his work.

So Hitler had bad breath! All that shouting and waving, all that stuff he did to make himself look so important, his screaming, not to mention that silly Schnurrbart, that idiotic patch of a mustache he wore, and no one could even get close!