Forget the Hollywood sign and the walk of fame -- the next time you're in Los Angeles, Calif., go off the beaten path and head to an abandoned Nazi compound.

There you'll catch a glimpse of an alternate reality in which the Nazis won World War II and set up their headquarters in sunny Los Angeles. That was the hope of landowners Winona and Norman Stephens, who built the the 50-acre "Murphy Ranch" in 1933 to be a self-sustaining Nazi community ruled by Adolf Hitler. Under the thrall of a mystical "Herr Schmidt," who may have been a German spy, the couple and a band of Nazi-sympathizers known as the "Silver Shirts" worked in the compound, doing military exercises and preparing for war.

The Daily Mail revisits the historic compound and notes that at the height of its glory, it was outfitted with a diesel power plant, a 375,000 gallon water tank, a giant meat locker and a bomb shelter.

Nowadays, the compound is rundown and dilapidated. Huge knots of mangled steel rust on the grounds and the concrete power station is covered in graffiti, waiting to be transformed into a rest and picnic area for hikers. In the meantime, says the Daily Mail, the site remains a magnet for "historians, curiosity-seekers and modern-day nazis."

In an episode of Travel Channel's "Off Limits," historian Randy Young reveals that the wrought iron gates at the entrance of the compound were made by famous African-American architect Paul Revere Williams. "They may have been Nazis, but they were Nazis with taste," he quipped.

Williams' architectural sketches also included plans for a four-story mansion, 22 bedrooms and five bathrooms, notes Curbed LA, but they were never carried out. Instead, federal agents raided the compound in 1941, the day after the Pearl Harbor bombing. Dozens of Nazi-sympathizers were rounded up and arrested.

The compound, which is located at the Will Rogers State Historic Park, can be accessed on a hike through Rustic Canyon. 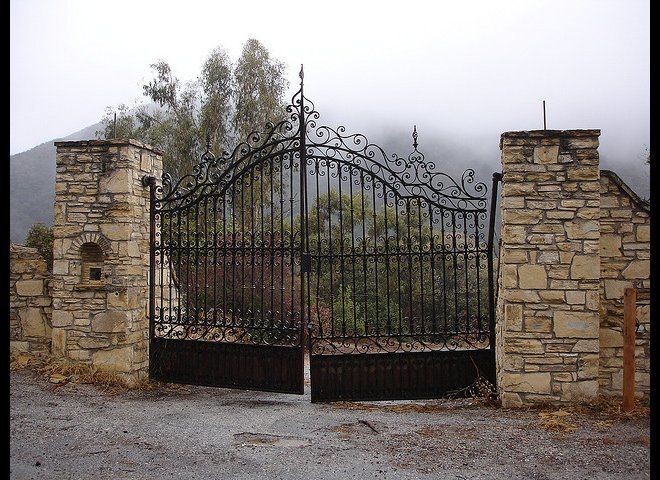