An Indian clothing shop owner is pleading innocence this week after his store, called "Hitler," outraged residents and drew strong criticism from the area's Jewish community in Vastrapur.

The storefront bears the name Hitler, in large letters, with a swastika dotting the 'i' in "Hitler."

According to AFP, the outlet, which opened 10 days ago in the western state of Gujarat, sells Western men's wear.

Proprietor Rajesh Shah told The Times of India that he had no idea the moniker would be controversial. "Hitler was a nickname given to my business partner Manish Chandani's grandfather because of his strict nature," Shah said. "Frankly, till the time we applied for the trademark permission, I had only heard that Hitler was a strict man."

Shah claimed he only found out the truth recently, after Googling the dictator's name.

Many in the community are not buying Shah's story, however. A Jewish shopper interviewed by The Times said, "The proprietors knew what the name meant and what Hitler stood for. They had researched well, right from the dress the dictator wore to his cufflinks. We had suggested a separate design, but the proprietors claimed that the name brings good business since its launch a week back."

A small group from a nearby synagogue also visited the shop in an attempt to convince the owner to change the name. Menasseh Solomon, secretary of the Magen Abraham Synagogue, told The Indian Express that the meeting was "friendly," but not necessarily fruitful.

"He (Rajesh) said his concept was never to hurt the community, and he feigned ignorance about Hitler... But after we left, we began to believe that he may have been aware about all this and was just pretending to be ignorant,” he added.

The Jewish population in India is small, but the Israeli delegation is taking the issue seriously, with Mumbai Consul General Orna Sagiv telling the AFP that the embassy would be looking to address the matter "in the strongest possible way."

Shah, who claims he spent 150,000 rupees ($2,700), on Hitler-themed advertising, said he would consider changing the name only if he is compensated for the money spent.

India has an interesting and complicated cultural relationship with the Hitler legacy. The Nazi Swastika symbol takes inspiration from a Hindu symbol commonly regarded as a sign of good luck. But this does not necessarily explain why, for example, Hitler's anti-Semitic manifesto "Mein Kampf" remains a bestseller in India, according to The Telegraph. Business students in particular are "happy to cite it as an inspiration," according to the paper, regarding it as model of management strategy and self-improvement.

Correction: A previous version of this report incorrectly described the placement of the swastika in the sign. It dots the "i' in the word "Hitler," not in the word "dictator." 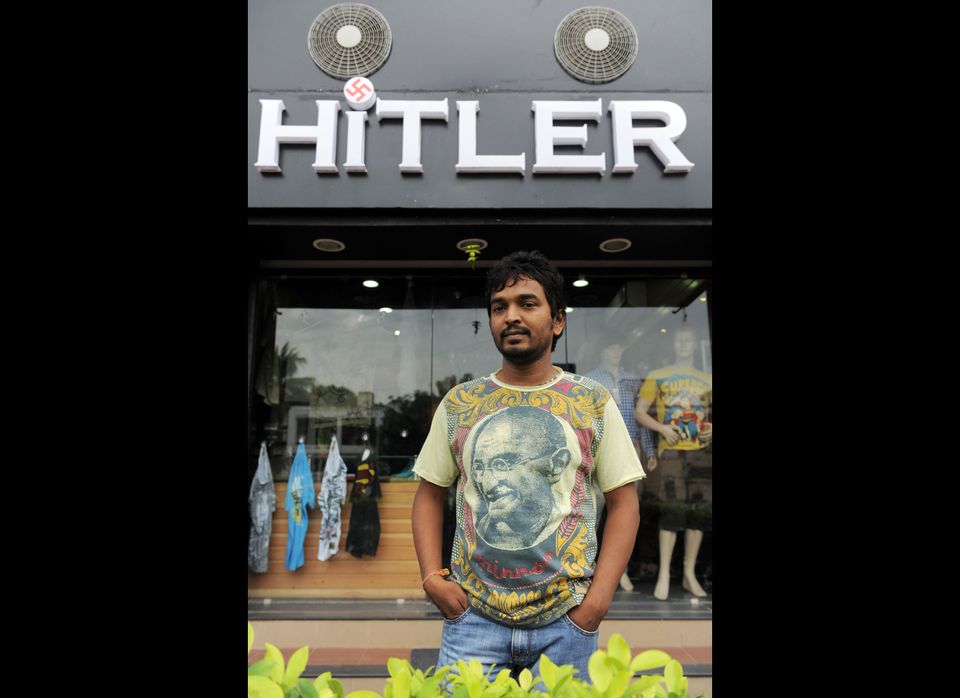 1 / 7
Hitler Clothing Store Outrages Everyone
One of the two Indian owners of the 'Hitler' clothing store - Rajesh Shah - poses in a T-shirt adorned with an image of Indian freedom icon Mahatma Gandhi, in front of his shop in Ahmedabad on August 28. Members of the Jewish community in the western Indian state have urged the shop owners to change the name of the store, which was opened on August 19. Prior to this a banner with the wording "Hitler opening shortly" was used by Shah and his co-owner to publicise the opening of the shop. (Sam Panthaky, AFP / Getty Images)
Sam Panthaky, AFP / Getty Images