Have you ever seen Hitler in color? Probably not. For the first time ever LIFE.com is publishing a color gallery taken by the fuhrer's personal photographer, Hugo Jaeger. Below are a couple of the photos. Underneath you'll find the story from LIFE of how Jaeger hid them from American soldiers after the war. See the entire collection at LIFE.com.. 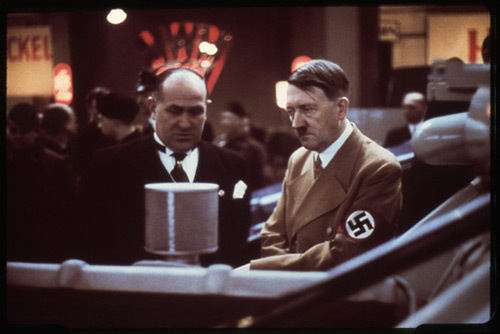 Caption: Hitler Among the Cars

Adolf Hitler tours the 1939 International Auto Exhibition in Berlin. Three years before, at another Berlin auto show, Hitler announced that Porsche would design the "People's Car," or Volkswagen, an affordable, practical vehicle for the working Germany family. 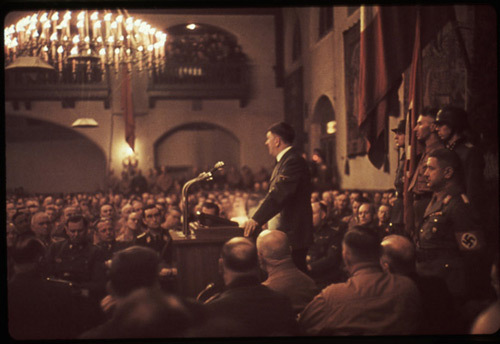 Hitler speaks in Munich on the anniversary of the 1923 Beer Hall Putsch, in which Hitler and other Nazi party members attempted to overthrow the German government. Hitler, jailed for a year for his part in the coup attempt, was a master of the art of swaying large crowds. "I was carried on the wave of the enthusiasm which ... bore the speaker along from sentence to sentence," chief Nazi architect, Albert Speer, recalled of one Nazi rally

Hitler's first schoolhouse in the village of Fischlham, Austria, was a tiny, one-room affair. "Our teachers were absolute tyrants," he later wrote, evidently blind to the terrible irony of his words. "They had no sympathy with youth; their one objective was to stuff our brains and turn us into erudite apes like themselves."

Between 1936 and 1943, German photographer Hugo Jaeger was granted unprecedented access to Adolf Hitler, traveling and chronicling, in color, the Fuhrer and his confidants at small gatherings, public events, and, quite often, in private moments. Here, and in several other galleries on LIFE, we present never-before-published photographs from Jaeger's astonishing -- and chilling -- collection.

Hugo Jaeger in 1970. Twenty-five years earlier, in 1945, when the Allies were making their final push toward Munich, Jaeger found himself face to face with six American soldiers in a small town west of the city. During a search of the house where Jaeger was staying, the Americans found the leather suitcase in which Jaeger had hidden thousands of his color negatives. He knew he would be arrested (or worse) if the Americans discovered his film and his close connection to Hitler. But what happened next astonished him.

Inside the suitcase that held the Hitler images, Jaeger had also placed a bottle of cognac. Happy with their find, the soldiers proceeded to shared the bottle with Jaeger and the owner of the house. The suitcase was forgotten.

After the Americans left, Jaeger packed the slides into 12 glass jars and buried them on the outskirts of town. In the years following the war, Jaeger occasionally returned to his multiple caches, digging them up, repacking, and reburying them. He finally retrieved the colllectionfor good--2,000 transparencies, all of them, amazingly, still in good shape -- and in 1965 sold them to LIFE.