New Form, a fashion boutique in Sicily, has caused a controversy by using Adolf Hitler in its current ad campaign, the First Post UK reports. The picture--displayed around the city as 18-feet high posters--depicts Hitler in a pink uniform accompanied by the slogan, "Change Style--Don't Follow Your Leader." Instead of a swastika, he wears a heart on his armband.

Local politicos have come out against the ad, with Councillor Rosario Filoramo saying, "The use of an image of a person responsible for the worst chapters of the last century is offensive to our country's constitutional principles and to the sensitivities of citizens." However, the advertisement agency responsible for the campaign said the images ridicule Hitler and encourage youth to create their own style.

In any case, the posters will soon be taken down when New Form launches its next campaign featuring Chinese Communist leader Mao Tse Tung. 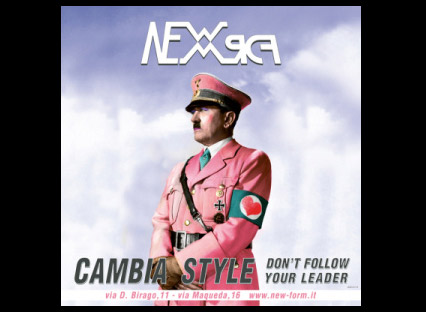