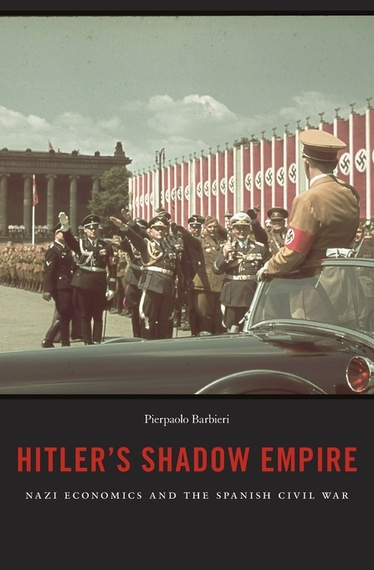 Winston Churchill's axiom that history is written by the victors is a cliché drilled into budding historians, hinting to them, perhaps, that alternative histories can be unearthed by imagining what might have happened had the losers won. In the case of Nazi Germany, the history written by the victor is largely one of an ideologically coherent political party on a racially-driven quest for Teutonic world domination. In the newly-released Hitler's Shadow Empire: Nazi Economics and the Spanish Civil War, Pierpaolo Barbieri illustrates why history should be written by historians rather than mere victors by vividly and meticulously illuminating the two very different conceptions of a what a strong Germany meant in the Nazi Party's prewar years among the party's leaders.

One faction believed that not only did the political acquisition of a territory still matter, but that it mattered most. Mass annexation was considered essential to the future of the German people. On the other hand was a faction defined in Hitler's Shadow Empire by the Führer's one-time Minister of Economics and President of the Reischbank, Hjalmar Schacht, who knew that without successful economic policy, land grabs meant little. Schacht advocated for an informal empire of economic rather than military dominance, similar to the colonial model and motivated by the prospect of new markets and natural resources. It was Schachtian economics, Barbieri suggests, rather than ideological fraternité that led Hitler to lend his decisive support to Francisco Franco on the eve of the Spanish Civil War. Had Schacht not been forced from the party in 1938, Nazi Germany's European expansion might have played out quite differently than it did.

Hitler's Shadow Empire is gripping reading even for non-economic historians. Barbieri gives his economic history a social context, and the book is full of the kind of seemingly-insignificant anecdotes that can quickly morph into pivotal historical moments -- to wit, we learn that a prostitute in a love triangle at the highest levels of the Spanish government defused a coup attempt in 1932.

I spoke with Barbieri about his re-framing of the relationship between two of the world's most despised men, the intrinsic danger of absolute power, and historical memory's very long shadow.

Why do you think Hitler's alliance with Franco has been cast as ideological rather than economic? I think that when the time came for a democratic transition in Spain, at least some people thought it was most useful to portray Franco as much as possible as an ideological equal to Hitler, in order to color the birth of his dictatorship. The level of violence in the Spanish Civil War was so intense -- both sides committed unspeakable atrocities and Franco spent considerable resources during and after the War to retaliate against the vanquished. And then he ruled with an iron fist for no less than thirty years after Hitler died, which gave him the ability to carefully re-write the parts in his victory story that did not suit him. That obviously leaves a significant historical legacy and division, still deeply felt in Spain today.

Given the deep-seeded and emotional nature of that division, I think saying that Hitler allied with Franco for resources rather than for ideological reasons might make some feel as though it degrades the direct link with which they associate two of the 20th century's most reviled dictators.

You dedicate an entire chapter to July 25, 1936. What was so significant about that particular day? That was the day that all of the European powers effectively decided who to align with in the Spanish Civil War and whether or not to intervene. And everybody made that decision trying to calculate what everyone else would do. It's striking that even without Twitter, the Internet, immediate information, the same interlinked decision-making was based on what the newspapers are saying on what your ministers are telling you, on what your allies are telling you, and of course your own prejudices. All these calculations were quite complex and involved chains of government decisions that were at times followed by leaders and at times completely ignored. I am very interested in how policy actually gets made. It is not "France" that decides, but one actor that coalesces with another actor and argues for something like a position at a meeting. It is far more granular than we might think.

But then Hitler made the decision to back Franco on that day after coming out of a Wagner opera, and named the airlift of Franco's army from Morocco to Spain "Operation Magic Fire," which was the theme of the opera. Hitler was obsessed with Wagner and the stories of redemption in his operas, and I think his decision to align with Franco that day was driven in part by a desire to play a decisive role in redeeming Germany from its diminished position in the world. After all, that is what at least in part drove his politics.

Tell me about the divisions within the Nazi Party in the 1930s. It seems there were two very distinct ideas about what kind of might Germany should seek to amass. Both ideologies shared the goal of a powerful Germany. The faction of the party that eventually won out advocated for a policy based on Lebensraum, the idea that territorial expansion and conquest was essential for German strength and survival. The policy Schacht advocated for was based on a more informal empire, like the kind Hitler established with Franco's Spain, built on expanded access to export markets and resources. Its aims were economic rather than military, and it built on World War I ideas associated with Weltpolitik.

Why did the Lebensraum faction win out? In writing this book, the most interesting thing was trying to see how things ended up the way they did. If we look at history is a Borgesian garden of forking paths, what different choices might have been made to result in different histories? I think considering all of those possible different choices, rather than saying from 1933 on, Auschwitz was a forgone conclusion, gives a more interesting and honest view of what decision making is in politics and life. There were rational people, Schacht among them, running policy in the Nazi Party's early years, and its interesting to consider what might have gone differently had his more economics-oriented faction prevailed over the one that did.

For the first four years the Nazi Party was in power, the Lebensraum rhetoric was mainly just that -- propaganda broadcast to the masses while more rational policies were actually being implemented at the top. At times Hitler himself disowned some of the extreme versions of these ideas, particularly support for "autarky" or economic closure. Schacht's fiscal policy and work projects like the Autobohn and the construction of the Luftwaffe worked well economically boosting jobs and growth, and won the party popularity.

But when it came time to moderate that policy to make it sustainable, Hitler refused to do so. He fired Schacht and replaced him with someone who would never tell him something wasn't possible. He centralized all decision-making in himself, and the pragmatists were marginalized or left the party on their own. Once those traditional conservative members had left, all that was left were the zealots, who would never tell Hitler no, and for whom rationality was irrelevant.

This sort of zealotry seems to have left room for very few checks on Hitler's power. There were eventually no checks on Hitler's power. He knew how to balance the competing factions within his regime by giving each the necessary illusion of power. But he was the one that made every decision -- he was "the decider." And by 1938, he was surrounded by people who were obsessed with him, who told him he was bigger than God, who could never tell him no. I think it is hard, particularly today, to understand the extent of personality cult in Nazi Germany. He began to believe his own success in foreign affairs, in a context where others were weak and his bluffs (in the militarization of the Rhineland, in the annexation of Austria, at the Munich Conference) all seemed to work seamlessly. This success in the foreign sphere seduced him and his closest entourage into thinking that he was the only one who was strong, and that it would always be that way.

In the Middle Ages, whenever someone was made Pope, they had somebody who would whisper in their ear throughout the ceremony, "sic transit gloria mundi" (how fleeting the glory of the world) to remind him that even if he was God on earth, a day would come where he wouldn't be. And when you don't have that -- and Hitler certainly didn't have that -- you don't listen to the people who say no.

And then you're living in a sort of an altered reality everyone has to live in for a little while before it inevitably comes crashing down. After Schacht left, there was no one with significant power who told Hitler that what he was doing was economically unsustainable. When ideologues run policy, you get statements like the one from one of the heads of the Central Bank meant to quell public fear of inflation: "If the Fuhrer says there's no inflation, there's no inflation." Hitler could make his own reality in foreign policy, but economics isn't like politics. You cannot simply outlaw inflation.

In the case of Nazi Germany, centralizing power in one man clearly had horrific results. Do you think that's always the case? What about societies that elect not to be democracies, not to have rights? I think one of the beauties of the American constitution is that it's built in anticipation of future weaknesses, rather than on the supposed perfection of the founding fathers. Even if you think you can trust your current leader with absolute power, how can you trust that the people who succeed them will be equally trustworthy? If you consciously try to give up your rights, you shouldn't allowed to, or at least not allowed to forever.