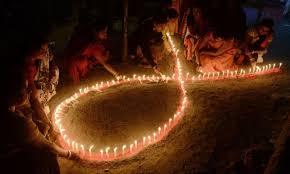 Glenda Gray, University of the Witwatersrand

Twenty years ago when someone acquired HIV, they would, on average, not live more than 12 years. Today, a young person who becomes infected in the developed world can expect to have a near-normal lifespan with access to lifelong, uninterrupted HIV treatment. Globally, the HIV/AIDS community has worked hard to realise the Sustainable Development Goal of ending the AIDS epidemic by 2030. One crucial part of this plan is bringing HIV treatment to all who need it. The 90-90-90 concept is one part of this plan. Ahead of the 21st International AIDS Conference, Professor Glenda Gray, President of the South African Medical Research Council, explains the importance of 90-90-90 and why there is so much talk around it.

A concept introduced by the United Nation's programme on HIV/AIDS in 2013, 90-90-90 is a set of goals. The idea is that by 2020, 90% of people who are HIV infected will be diagnosed, 90% of people who are diagnosed will be on antiretroviral treatment and 90% of those who receive antiretrovirals will be virally suppressed. Viral suppression is when a person's viral load - or the amount of virus in an HIV-positive person's blood - is reduced to an undetectable level.

The strategy is an attempt to get the HIV epidemic under control and is based on the principal of universal testing and treating. What is central to "test and treat" approaches is that if one can identify people early on in their infection, and start treatment so they become virally suppressed, the onward transmission of HIV will be prevented and this will impact on HIV incidence at a population level.

There are an estimated 36.7 million HIV-positive people across the globe. In line with this, the goals would mean that 33.2 million of these people would be diagnosed, 29.5 million would be on antiretrovirals and 26.9 million would have viral suppression.

How realistic is this plan?

This is a strategy to try and control the HIV epidemic and get towards an HIV-free world. The concept of universal test and treat is an aspirational concept, but it is an incredibly difficult plan to implement at scale, particularly in resource-poor settings that are heavily burdened with HIV.

This plan entails that the health service identify HIV in people who are not symptomatic, and who are not seeking care. It entails taking HIV testing out of the clinics and into the community, and requires new and innovative ways to get people tested for HIV infection. In order to make this plan realisable the health system has to endeavour to make HIV testing easily available even in the most remote areas of the world.

The second component of this plan entails ensuring that HIV-infected individuals are triaged into care, and they need to start antiretroviral treatment as close to diagnosis as possible. People who are asymptomatic and well may not feel ready to start taking treatment for life, which means that there needs to be adequate counselling and support, and the health benefits of early initiation of care need to be adequately explained.

Antiretroviral drugs need to be available in all places at all times. Once treatment is initiated, the aim is to keep people on treatment and adherent so that they can be virally suppressed and incapable of transmitting the virus to sexual partners, and to have maximal health benefits from early initiation of treatment. It also requires countries to have at least three lines of drug therapy. Currently only five countries in sub-Saharan Africa have three lines of treatment for people to transition onto once they have drug resistance or experience toxicities.

Most countries are unable to realise these ambitious programmes. There are several reasons for this:

Although resource-rich countries that have less of a burden of disease are more likely to get and retain people on treatment, in heavily burdened countries there are difficult choices to make as a government, as programmes such as this require extraordinary resources.

It entails a robust health system, innovation to improve HIV testing access, and antiretroviral supplies that will be uninterrupted and support all three lines in case of drug resistance. It will entail not only a robust health system but a cadre of health-care workers who are trained and able to deliver a good service.

It also requires financial investment and a country that sees the investment case and is willing to put its own money and not that of donors into the programme.

Which countries have made remarkable progress towards 90:90:90?

In Africa, Botswana is close to reaching the 90-90-90 target for testing, treatment and viral suppression. Botswana was the first country on the African continent to provide free antiretroviral treatment to people with HIV, starting in 2002. Furthermore it has achieved its level of coverage when providing treatment to people with CD4 cell counts below 350 cells/mm³, even before moving to providing treatment for everyone diagnosed with HIV infection.

Previous international reviews of treatment cascade performance have shown that northern European countries and Australia have made the greatest progress towards reaching the 90-90-90 target.

At the last International AIDS Conference, it was reported that Switzerland, Australia, the UK, Denmark and the Netherlands were well on their way to achieving this target. In each case, easily attainable improvements in the rate of diagnosis or treatment initiation should allow these countries to reach the goal.

Which countries are struggling to reach the 90:90:90 goals?

Many countries are struggling to reach these targets because of hard-to-reach populations. Testing and treatment has enormous challenges irrespective of the country you live in.

Many of those who receive HIV treatment are those who are the easiest to reach. This means that the road to universal access for all populations still poses major challenges.

There are substantial coverage gaps in many regions. To use Africa as an example: in 2013, treatment coverage on the continent ranged from 41% in eastern and southern Africa to 11% in the Middle East and North Africa.

At least 30 countries in the world account for 89% of all new HIV infections. At least 18 of these countries are in Africa, including Côte d'Ivoire, the Democratic Republic of the Congo, Mozambique, Nigeria and South Africa. But the list also includes other low- and middle-income countries like Brazil, China and India, and high-income countries like the US.