We hear a lot about the overfishing crisis. Overfishing is, in fact, a crisis and we are running out of fish. Frankly, this is a crisis that you and I will survive. But a billion people are running out of fish, and they won't survive because fish is their main source of animal protein. Importantly, the overfishing crisis is not just about food. It is, perhaps surprisingly, about HIV/AIDS. When a mom runs out of food and cannot feed her children and her children have stopped growing because they have not had protein in months, she will do anything she can to remedy the situation. As a last resort, she will trade sex for food. Women represent 50% of the fishing work force; in some countries that number is as high as 80%. When fisheries around the world collapse, millions of women are left without jobs, money, hope or options. Further, as fisheries collapse, men must travel further and further away from home to make their catch. The longer they are gone, the more likely they are to use drugs, have extramarital affairs, or start a second family. These behaviors increase the rate at which HIV spreads. As a result of these adaptive behaviors, fishing villages all over the world, from to Kenya to Cambodia to Honduras, have dramatically higher rates of HIV than other communities. For example, fishermen are five times more likely to die of AIDS-related illnesses than farmers in the Lake Victoria region. In some fishing communities the HIV/AIDS rates have been as high as 30-70%. The overfishing crisis is not only about fish, it is about people and it is a life and death situation.

Importantly, the fishing-HIV/AIDS link is increasingly about women and girls. Gender inequalities result in a higher rate of HIV in women in most fishing villages. In many places in the world, women begin their sexual activities earlier thereby increasing their vulnerability to HIV/AIDS (their young bodies are not yet ready for sex, so they are more prone to getting HIV than a sexually mature woman), they have sex with older men who are more likely to have HIV/AIDS, and they have fewer alternatives because of lower literacy rates and no alternative skill sets. Women also lack negotiating power; in other words, it is tough to ask a man to use a condom when you are sleeping with him for food because there is another woman who is willing to do the same thing and take her chances.

Well, that is all very provocative but it sounds pretty grim and it doesn't have much to do with you and I, right? Not quite. You have probably noticed that there are seafood and sushi restaurants in every major city in the world; Port Moresby, the capital of Papua New Guinea, has a fabulous sushi restaurant as does Des Moines, Iowa, and every city in between. It is hard to believe we are 'overfishing' anything when our access to fish is seemingly limitless. In fact, our supply is not limitless, and as our fish addiction grows -- our "suppliers" resort to more desperate and horrific fishing practices to meet our demand.

Right now, Europe can only meet 50% of its demand for fish with locally sourced products. The balance of fish comes from places like Senegal. Because the Senegalese government has almost zero enforcement capacity, the European fishing vessels can take their catch allotment and then take whatever else they can fit on their boat without fear of fines, jail-time, or vessel confiscation. The conservation community refers to this type of activity as IUU fishing (illegal, unregulated, and unreported fishing). Translation? The fish are stolen, without consequence, and the product is sold to us so that we can continue to enjoy our moderately priced sushi. The U.S. is the second largest importer of fish products behind Japan. About 57% of those fish come from developing countries. We are not without blame in this game.

When we aren't eating sushi, we are usually eating some sort of processed fish. Fish are caught and then sent to factories for cleaning, cutting and marketing. Shrimp platters, calamari rings, and other processing are usually done by women working in deplorable working conditions often in violation of labor laws. We are somehow able to understand and object to sweat shop conditions that produce t-shirts and tennis shoes. As consumers, we don't understand that this concept applies to the fish we eat. 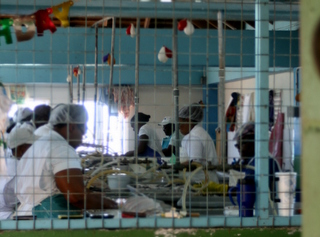 So if we are driving this fishing crisis, what can we do about it? We have all kinds of fish certifications that ensure the fish are caught sustainably. We have no certification to ensure that people aren't dying or being injured while catching and processing our fish. I want to eat fish that I am 100 percent certain was not caught using slave labor. I want to eat fish that I am 100% certain did not result in a woman having to sell herself to feed her children because local fish catch is being exported rather than giving locals options to eat first.

Should we stop eating sushi? I'll be honest. I love eating sushi. But I would be willing to pay top dollar for a sushi dinner that I knew was caught honestly, safely, without harm to another person. It is time for our food labeling to not only ensure that fish are caught, processed and sold sustainably; but that the people who supply the fish are protected as well.