Jackie is a 27-year-old, HIV-positive woman who contracted the virus
when she was raped at the age of 15. When her HIV status was
disclosed, she was shunned by family and friends and found herself
living on the streets. The circumstances under which Jackie was
living caused her to miss clinic appointments and not adhere to her
medication regimen -- behaviors that can lead to drug-resistance and new
infections. Jackie is from Uganda, but this could easily be the story
of a young woman in the U.S.

Social stigma related to HIV continues to be a major barrier to
preventing the spread of HIV both in Africa and in the U.S., and
significantly impacts the numbers of those who seek treatment. In the
District of Columbia, one in 20 residents is infected with HIV, and one in 50 has AIDS. In Uganda, the infection rate is 6.4 percent.

Recently, Jackie made her first trip to the U.S. where she insisted on
meeting and speaking with as many individuals and groups as possible.
With them, she shared the story of how she contracted HIV and the
resulting stigma that nearly led to her death. She also talked about
the specialized counseling, treatment, and skills-building she
received at Accordia Global Health Foundation's Infectious Diseases
Institutehttp://www.accordiafoundation.org/ in Kampala, Uganda, a center of excellence in the heart of
Africa. This specialized care has given her the courage to speak
out.

After meeting Jackie and Accordia's president, Dr. Warner Greene, I
decided to make my first trip to Uganda. There I spent time with the
doctors, nurses, lab technicians, researchers, professors, counselors,
volunteers, patients, and countless others at the Infectious Disease
Institute, who are turning the vision of a healthier future into a
reality. If it were not for them, Jackie and countless others would
not be alive.

In her modest home, Jackie recounted for me what she learned during
her time in the U.S. She discovered that (as in Africa), U.S.
organizations -- despite years of public education -- face many of the
same struggles engaging young people to seek treatment. Jackie and I
agreed that fear, ignorance, and low self-esteem are crippling young
people. To address these issues, Jackie as well as the IDI doctors,
nurses, lab technicians, researchers, professors, and counselors I met
during my visit discussed strategies for long-term capacity building
with applications for home and abroad.

The takeaway from my trip was clear: to create a generation free from
HIV, every individual -- including those who are HIV negative - must
take personal responsibility for leading healthy lifestyles and must
be educated to reduce stigma. As a global community, we must redouble
our efforts to increase access to care, education, and psycho-social
support while research is underway to identify new prevention and
treatment options. As we learned from Jackie -- stepping up to
support young people who are HIV-positive will pay tremendous
dividends in the global fight to prevent new HIV infections.

As Washington D.C. prepares to welcome the first U.S.-hosted
International AIDS Conference in 2012, it is time to take stock of our
shared stories, shared lessons, and shared responsibilities.

It is also time to ensure that we are addressing this global crisis in
smart, leveraged ways. Next week, I will participate in a
Congressional Roundtable on Centers of Excellence in Africa and the
contributions of the US private sector in driving health innovation
and leadership. Return here on October 12 when I'll share comments
and observations on this important meeting.

Paving the Way for a Generation Free of HIV 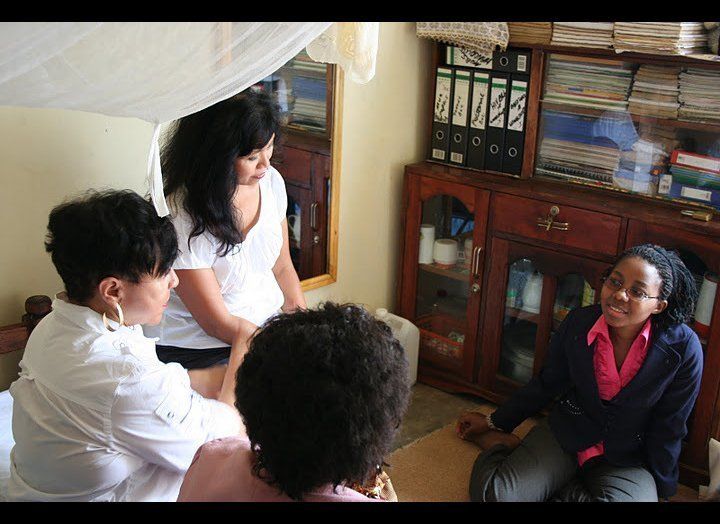 1 / 6
Jackie, her counselor, Adeline Twimukye, my chief of staff, Giardy Ritz, and I discuss finishing her business degree, career goals and advocay work.