After decades, possibly centuries, at the bottom of the sea — and a 2,200-mile-long (3,540 kilometers) road trip wrapped in damp blankets in the back of a pickup truck — a barnacle-crusted anchor arrived in Texas this week for a major cleaning.

The men who raised the object from the floor of the Puget Sound hope conservation efforts will uncover proof that they found the long-lost anchor from a historic British voyage around the world.

In 2008, a fisherman named Doug Monk was collecting sea cucumbers just north of Seattle near Whidbey Island when his diving gear got caught on a huge anchor, The Seattle Times reported. Monk teamed up with amateur historian Scott Grimm to study the object, and the two obtained legal rights to salvage it. Last month, the duo finally pulled the 10-foot (3 meters) anchor from the Puget Sound with a crane. [See Photos of Shipwrecks of the Deep Sea]

Monk and Grimm think the anchor belonged to the HMS Chatham, a service ship that accompanied the HMS Discovery on the Vancouver Expedition, a four-and-a-half-year exploration funded by the British crown in the late 18th century. In 1792, when the ship was navigating strong currents in the Puget Sound, the anchor became wedged against a large rock, and its cable snapped, according to historical records. Recovery efforts at the time failed, and the anchor was lost.

Monk and Grimm hired specialists at Texas A&M University's Center for Maritime Archaeology and Conservation to restore the sunken treasure. After a 36-hour drive from Washington state, the two men arrived Monday morning (July 21) in College Station, Texas, to deliver the object.

The duo, Grimm said in a statement, were confident that the conservation work would uncover markings "that show beyond a shadow of a doubt" the anchor indeed belonged to the British crown, proving wrong naysayers who think the HMS Chatham's anchor was lost farther north, somewhere in Bellingham Channel.

They may be in good company at Texas A&M, where Jim Jobling, who happens to be an expert on the history and development of English anchors, is leading the restoration at the university's Conservation Research Laboratory.

"I looked straight at it, and I said, 'It's a classic old English admiralty anchor,'" Jobling said. He added that the anchor would have been the right size for the HMS Chatham, though he cautioned against making any conclusions about the object just yet.

"Is it 100-percent HMS Chatham? That's difficult to say, but there are no smoking guns yet that say it's not," Jobling said.

It will likely take more than a year to strip the anchor of all the concretion, orange-colored rust, barnacles and mussels covering up any possible markings on its original iron surface, said Jobling.

"Iron in its happiest state is rust," Jobling told Live Science, and iron rusts much more quickly when salt is present.

For the next several months, Jobling and his team of graduate students in the nautical archaeology program will keep the anchor in a T-shaped steel tank to slowly coax the salt out of the iron artifact. The setup is essentially an electrolytic cell. In this case, the steel tank is the anode (or the positively charged electrode), and the anchor, propped up on special plastic pads, is the cathode (the negatively charged terminal). Jobling said he will put sodium hydroxide in the water and apply a direct-current power supply that will flow into the anchor, removing salt from the iron and dropping it into the water.

Once that solution reaches equilibrium, no more salt will come out of the anchor, and the liquid will need to be changed, Jobling said. There will likely be four or five change-outs over a period of a year and a half, and during each tank cleaning, the conservators will take the opportunity to tap away at the anchor with hammers and chisels to remove its crusty coating.

After the anchor is fully cleaned and given a protective coating, it will be sent back to Washington, where the salvors hope to find a local museum or other gallery that will permanently display the object.

"Our goal is definitely to keep it in the Northwest," Grimm said in a statement. 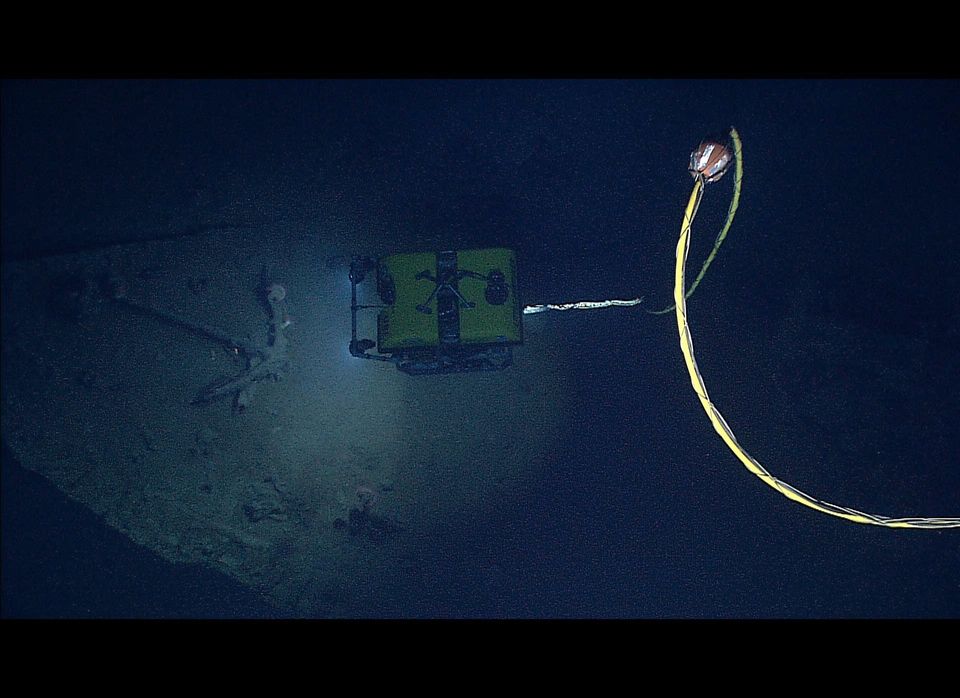 1 / 20
Historic, 19th Century Shipwreck Discovered
NOAA's Seirios Camera Platform, operating above the Little Hercules ROV, images the ROV and an anchor inside the hull of a copper-sheathed shipwreck in the Gulf of Mexico. The wood has nearly all disintegrated after more than a century on the seafloor.
NOAA Okeanos Explorer Program