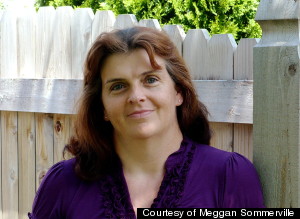 In the days after the Supreme Court handed Hobby Lobby a sweeping victory in its fight to not provide employee health insurance that covers certain kinds of birth control, many customers came into the store in Aurora, Illinois, where Meggan Sommerville works, and offered their congratulations.

Hobby Lobby is a chain of craft stores whose founder says he tries to run the company in accordance with his Christian principles. Sommerville has worked there for 16 years. She loves her job and the store, which she said pays a good wage and carries supplies that she’s used for many of her own crafting projects.

Still, the congratulations from customers were hard to swallow. "I'd smile and nod and say, 'Yes, it's a victory for the company,' and then I'd push my real feelings down and not think about it anymore."

Sommerville is a transgender woman, and back in 2011, she filed a complaint against Hobby Lobby with the Illinois Department of Human Rights after the company refused to allow her to use the women's bathroom either as a customer or an employee.

She was never given an explanation. But Sommerville said she sees a connection with Hobby Lobby's argument that Christian principles should excuse it from covering some contraceptives.

Sommerville transitioned to living as a woman in 2010. For the most part, colleagues and management were supportive, trying their best to use her new name and the right pronoun. That summer, she formally changed her name in court and received a new Social Security card and driver's license. A month later, Hobby Lobby provided her with a new name tag that finally matched how she saw herself.

But management refused to budge on one issue: They insisted that Sommerville continue to use the men's restroom. According to Sommerville, she was told she would only be allowed to use the women's restroom if she provided proof that she had undergone genital reconstructive surgery. Neither the state of Illinois nor the federal government require this surgery for a person to legally change his or her gender.

"I was devastated," Sommerville said. "I just want to be treated like all the other women. To do anything else diminishes who I am in the eyes of customers and employees."

Going to the bathroom became an embarrassing ordeal, where she was constantly worried about outing herself to customers or colleagues who didn't know her history. "There have been a few times when a customer has come in and I have essentially been trapped in the stall while I wait for the person to leave," she said. "The stories of trans women that have come under attack are always on my mind when I am forced to use the men's room. At the very least, I don't want to make a scene."

Sommerville's human rights complaint alleges that the company discriminated against her and "subjected her to unequal terms and conditions due to her gender identity." Through a representative, Hobby Lobby declined to comment on her case, which is still awaiting a ruling from the Illinois Human Rights Commission.

Hobby Lobby has not argued that religious principles influenced its refusal to allow Sommerville to use the women's bathroom. But her lawyer, Jacob Meister, pointed to a recent Salon.com article on how Hobby Lobby, its executives and affiliated companies are pouring millions of dollars into organizations and causes that seek to advance conservative Christian values and oppose lesbian, gay, bisexual and transgender rights.

"I think the facts speak for themselves. Hobby Lobby has very actively sought to impose what it believes the law should be wherever possible, and it has thrown a lot of money behind these efforts," Meister said.

"I have absolutely no possible explanation for why they would so flagrantly ignore what's very clear in Illinois law," Meister continued. "Meggan is a female, she's been full-time for many years, and they will not allow her to use the women's restroom, which is something that is afforded to every female employee that they have except for Meggan, every female customer they have except for transgender folk."

In the weeks since the Supreme Court's June 30 ruling in Burwell v. Hobby Lobby Stores, LGBT advocates and legal experts have picked over Justice Samuel Alito Jr.'s majority opinion, trying to gauge whether it gives corporations or institutions with religious affiliations carte blanche to discriminate against LGBT individuals.

Ilona Turner, legal director at the Transgender Law Center, said she thinks that it does not. Still, she said, "I could imagine that employers will attempt nonetheless to try to push the boundaries of that decision, to argue that their religious values give them a right to discriminate."

Sommerville's issue is one of the most common faced by transgender people in the workplace, Turner said. While religion is not often mentioned explicitly in connection with lawsuits arising from similar scenarios, it is often "in the background," she said.

Last year, California passed a law allowing transgender students to use facilities and participate in programs in accordance with their gender identity. That has fueled fears among conservative Christian groups that the rest of the states would soon follow.

After Phoenix, Arizona, passed a similar law in February 2013, Joseph LaRue, a lawyer with the Alliance Defending Freedom, a national Christian legal organization, wrote a blog post calling the measure "appalling" and arguing that it "provided voyeurs and other sexual predators easy access to the places where children and women are most vulnerable." According to Salon, the Alliance Defending Freedom is one of the groups heavily funded by Hobby Lobby profits.

Sommerville, a Christian herself, hopes that her human rights complaint may help change the culture at Hobby Lobby, at least on this particular issue. "I think any time somebody stands up for their rights to be respected, to be treated equally, it can make a change."