HONOLULU ― Three years after setting sail from Hawaii using only the stars, the wind and ancient Polynesian navigation techniques to voyage around the world, the Hokulea, a traditional double-hulled Hawaiian sailing canoe, has arrived back home on the island of Oahu.

Thousands of people welcomed the Hokulea as it docked in Magic Island in Honolulu early Saturday morning. Hawaiians greeted the canoe and its crew with traditional chants.

The homecoming, which marks the end of a difficult and meaningful voyage, was an emotional one for many. As the canoe approached land, a rainbow could be seen just off the horizon.

The Hokulea was greeted by a rainbow as it sailed past Waikiki this morning. This photo was taken from Elks Lodge 616 about 7:20 a.m. pic.twitter.com/kYqpdAJgIb

In 2014, navigators with the Polynesian Voyaging Society set sail on the Hokulea with one message: To inspire communities around the world to take care of “island Earth.” In its voyage, the Hokulea and her crew traveled more than 40,000 nautical miles, visiting 150 ports in 23 countries, including stops in South Africa, Brazil, Tahiti and New York City.

The Hokulea’s unique mission is a point of pride for the Aloha State.

Hawaii is one of the few states that has pushed back against the Trump administration’s policies on climate change. This month, Governor David Ige, a Democrat, signed a bill that binds the state of Hawaii to the goals made in the Paris climate accord, despite President Donald Trump’s decision to pull the country from the agreement. In 2015, Hawaii became the first state to enact a law requiring that 100 percent of its electricity come from renewable sources by 2045.

“Watching you on your epic voyage, you taught us that there is more than connects the world than divides us,” Ige said to the Hokulea crew during Saturday’s ceremony, according to the Honolulu Star-Advertiser.

See the residents of Hawaii welcome the Hokulea home in the photos below.

Crowds spill into water amongst the canoes of ʻOhana Waʻa, an amazing sight that will go down in the history books… https://t.co/6zhqoftFf5 pic.twitter.com/SsYbKM2GZt

The scene earlier this morning as Hōkūleʻa made her way into port at Magic Island, Ala Moana Beach Park after visi… https://t.co/CaurKXNxuz pic.twitter.com/RZOoN5gafb 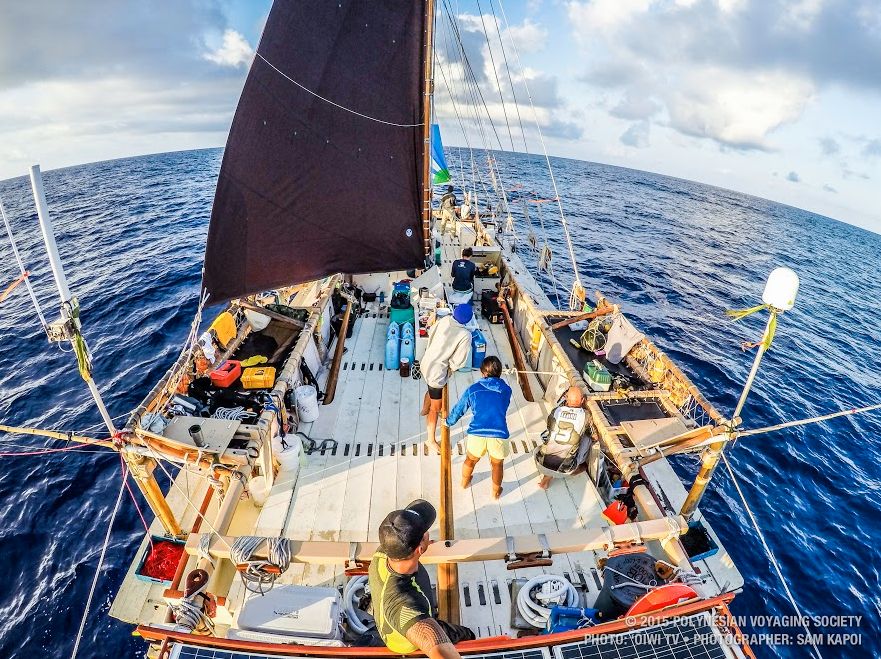