Imagine sailing in the middle of the ocean on a 62-foot wooden canoe with 16 other people that you might not know that well, let alone like that much. There are no instruments aboard, no technology to connect with your loved ones back home, and you go to the bathroom by leaning over the side of the boat. You sleep for four hours and work for eight, eating packed rations and fish you catch from the sea. The stars are the only method to navigate and the onboard wayfinder -- or navigator -- directs your progress using a compass based on ocean swells, stars, and time lapsed.

On May 17, the Polynesian Voyaging Society embarked on such an expedition, using the same wayfinding techniques and replicated canoe that the ancient Polynesians used. But while ancient Polynesians searched the Pacific for new islands of resource and habitat, the PVS mission is setting out to cross 50,000 nautical miles, circumnavigating the world in an effort to change it.

The audacious mission is estimated to take them three years. Landing in more than 25 countries and 12 marine World Heritage sites, PVS hopes to show that the world is small, that we're all connected, and that we need to do a better job caring for the island that is Earth.

“Living on an island chain," PVS writes on its website, "teaches us that our natural world is a gift with limits and that we must carefully steward this gift if we are to survive together. The worldwide voyage is a means by which we now engage all of Island Earth -- practicing how to live sustainably, while sharing, learning, creating global relationships, and discovering the wonders of this precious place we all call home.”

The canoe itself, where survival depends on how you make the most of your limited supplies and how you all get along, is a metaphor for this mission, and PVS hopes to highlight issues like rising sea levels, impending and irreparable glacial ice melts, overfishing and reef destruction.

While Hokulea "2.0", an updated version of a canoe that was originally built in the 1970s, will stick to traditional techniques to navigate the expedition, a sister canoe -- named Hikianalia, will be outfitted with state of the art technology such as a satellite dome, deck house, and even toilets. Crews will rotate for 30-day missions on the Hokulea while the one-million-dollar Hikianalia will allow crew-members to communicate with classrooms and the world via live chats, videos, blog posts, and photographs. You can track the canoes' realtime whereabouts here.

The Hikianalia will also serve to protect the Hokulea in the face of danger. When they reach Africa, for example, sometime in 2015, they'll have to charge through stretches of the Indian Ocean where the current clashes with the wind, generating sudden storms, gusty winds, and rogue, 100-foot high waves. They'll also have to avoid waters littered with piracy, kidnappings, and ship collisions.

The price tag for all of this is estimated to be at least $12 million, and PVS has relied entirely on donors and volunteers to get it there.

Despite the cost, Master Navigator Nainoa Thompson has said, the mission is worth it. “We’re not going to change the world," he has said, "but we’re going to go and build a network of people around the Earth who are going to change it. And our job is to help them be successful.”

PHOTO GALLERY
This Is Hokulea

A Canoe's Epic Voyage To Change The World
This Is Hokulea 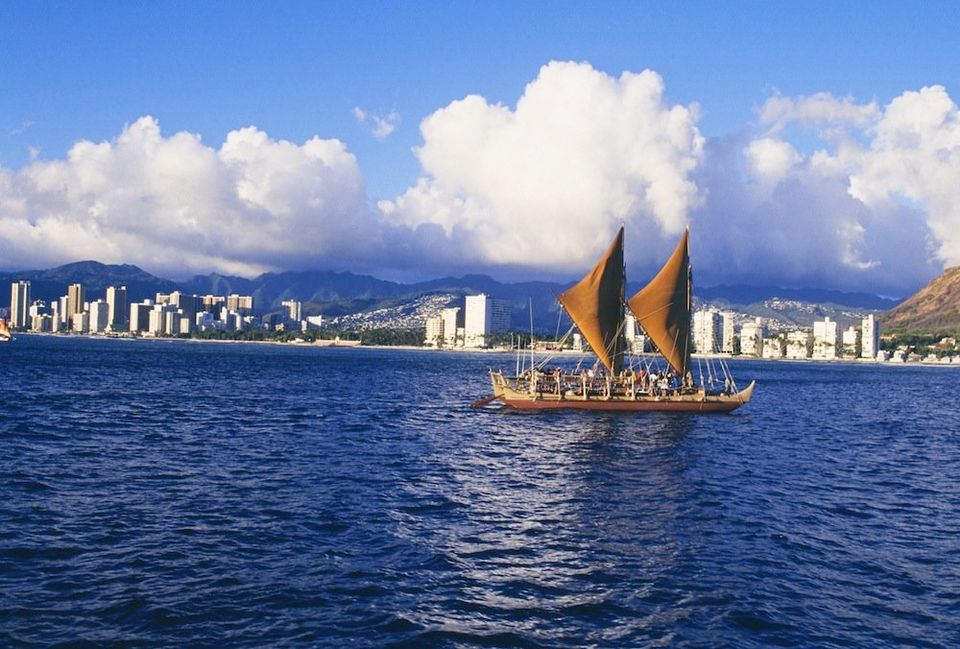