Bluegrass and folk legend Hazel Dickens died at 75 a few weeks ago from complications with pneumonia. If you don't know Dickens' name, you surely have heard her music somewhere along the way. Maybe you encountered her voice in "Harlan County, U.S.A," where her renditions of Billy Edd Wheeler's "Coal Tattoo" and her own "They'll Never Keep Us Down" provided the heart and soul of the soundtrack for the Oscar winning documentary.

Dickens, along with Alice Gerrard, recorded what is most likely the earliest bluegrass record made by women, "Who's That Knocking," (Smithsonian Folkways-1965) when the genre was dominated by men.

Dickens and Gerrard (Hazel and Alice) are iconic names in folk and bluegrass and certainly an argument can be made that the duo paved the way for women in the music business. Smithsonian Folkways (SF) certainly thinks so:

"Their widely admired performances made them role models for future generations of women in bluegrass."

You can find that quote in the liner notes for "Pioneering Women of Bluegrass," (SFW40065) produced and recorded by Peter K. Siegel, with sidemen and bluegrass legends Lamar Grier, Chubby Wise, David Grisman, and Billy Baker.


There is a new generation of women bluegrass musicians, inspired by and grateful to the trailblazers that went before. Two days after Dickens' death on April 22, the Atlanta-based, five piece Roxie Watson Band took the stage in Blue Ridge, GA and offered a second-set tribute of an original song dedicated to coal miners, the poor, the dispossessed, and the working women that Dickens so passionately championed.

Banjo player and former Cowboy Mouth bassist, Sonia Tetlow, was circumspect backstage at the Blue Ridge Community Theatre, where a packed house of 200 was settling in for the performance. This was the second time that the Roxie Watson Band was in town and organizers at Out of the Blue Gourmet Dining had predicted that seats would sell out fast. They were right and the turnout was impressive considering there aren't many more than 1500 people in the town. Tetlow was well aware that the memory of Dickens' passing was something that would drive one of the songs that night. 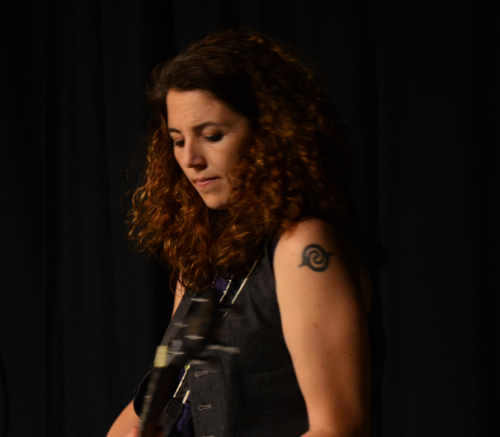 
"Just reading Hazel's obituary this morning, and how she is the first woman to get an honor from the Bluegrass Association, and it wasn't until the nineties, you know. She had been playing all though the sixties and seventies and I thought about wanting to come up here to play this show and you know, I just have to salute her," Tetlow said.

Tetlow was referring a songwriter award for Dickens' "Mama's Hand," recorded by Lynn Morris in 1996 and the 1993 Distinguished Achievement Award from Nashville's International Bluegrass Association.

Roxie Watson is a five-piece string band from Atlanta that plays, what they like to call, "alterna-grass." It mixes traditional three and four part harmonies, elements of old country, Appalachian music, hymns and bluegrass. The band likes to say that they don't adhere to "the traditions of any one genre," but the way they mix it up with mandolin, bass, acoustic and electric guitars, lap steel, button accordion and harmonica -- adds to, rather than detracts from, the traditional sounds of "pure" bluegrass.

The audience loved it. These women are more than proficient as musicians, have a warm way with a story, and a natural stage banter that comes from a long history of friendship and community. The stage morphs into a back porch with the audience becoming honored guests in an intimate setting that is a heck of a lot of fun, heartwarming, and heartrending when it needs to be. The front row at the community theater was close enough to the stage that audience members' knees and boots were resting on the apron.

As vocalist Becky Shaw tore up the signature Dolly Parton tune, "Jolene," the audience was tapping and humming along, broad smiles beaming into the darkness. There is something about a familiar tune done well that cuts to the core. "Jolene" was a risky choice to play for an audience that lives and works in the gateway to the Appalachian Mountains. Comments on the band's Facebook page might have Dolly sit up and take notice of these young 'uns. Tetlow's banjo and Shaw's buttonbox added just the right elements, turning a classic country tune into bluegrass all the way. Never mind "alterna-grass." 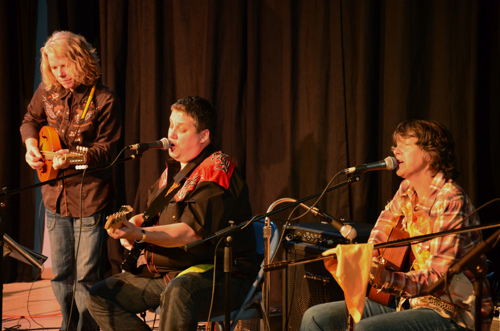 This was foot-stomping, tear your heart open bluegrass. 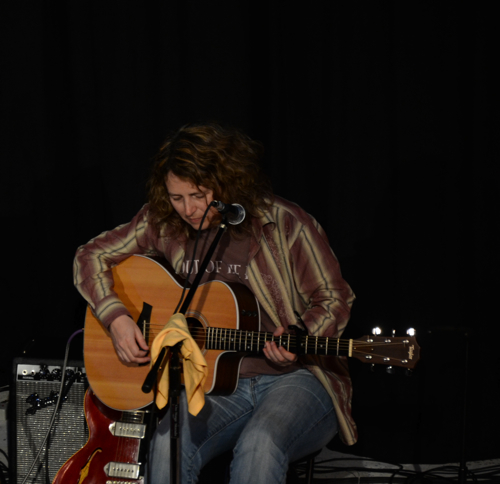 
Bolley doesn't bring it up, but she has a Grammy nomination for her drumming on Michelle Malone's 2006 "Sugarfoot." Tiny Wheeler keeps a quiet personal presence at stage right, but she plucks her mandolin with bright precision, notes fading into silence at exactly the correct tempo.

It was early in the second set when the ghost of Hazel Dickens joined Roxie Watson on stage. Bassist Lenny Lasater introduced her composition, "Blue Creek No. 3," with a tribute.

In 1978 Lasater got a job working in the Alabama coal mines as "one of the first thirteen women to go down into the deep mines in Bessemer Alabama."

When she announced Dickens' death, there were audible gasps and sighs from the audience, as well as a loud, "No!"

"Jimmy Carter was president and there were long lines at the gas pumps. Hazel Dickens just passed away and she was a true pioneer of bluegrass and women's music. She was one of eleven children and grew up in a coal mining family in West Virginia, lost her brother to black lung. I'd like to send this one out to Hazel. I have always admired so much of her music and her ability to tell a tough story about tough people and working people," Lasater said.

Lasater's story is true and reflects what women went through to earn what was considered a "decent wage" of $7.45 an hour, when the minimum was less than half that amount. Men did not want women in the mines. It was considered bad luck.


Went down in that hole a child and came back up a woman
Jim Walter's Blue Creek No. 3
Left my life in Tennessee and went to California
Didn't take me long to come back home
Ended up in Birmingham in school to be a teacher
Wound up down in Blue Creek No. 3.

The men believed a woman in the mine would cause a cave-in
They tried to scare us off or just be mean
But we stood our ground and worked as hard as any other
Digging coal in Blue Creek No. 3

Lasater lasted eight months and quit after a mining accident killed a male foreman. As the only female nearby, she was told to sit with the dying miner and comfort him while help in the form of a coal cart was sent to take him to the surface. Women were good enough to offer comfort to the men, but not good enough to work along side of them.

"We took the injured miner out in the low railroad car called a 'manbus' that twice a shift came to the working face, to bring us in and then to take us out. Then up in 'the cage,' a vertical elevator to the surface. It took about 30 minutes to get from working face to the surface and maybe 20 to 30 minutes before the 'manbus' came to the section where the accident happened. We had to move him approx. 100 to 150 ft to the tracks' end where the 'manbus' was waiting," Lasater recalled.

The roof gave out, the rocks had slipped
and made a great cathedral, where there was once a narrow hall
We carried out those boys that night and I cleaned out my locker
I'd done my time in Blue Creek No. 3

The Blue Creek mines are located between Birmingham and Tuscaloosa. In 2001, twenty-three years after Lasater quit, and less than two weeks after the Twin Towers fell, an explosion at 2,000 feet below the surface at the Jim Walter Resources No. 5 Mine took the lives of thirteen men. The story was lost in the aftermath of the terrorist attack.

Blue Creek No.3 is a tough song about tough women, performed with solid musicianship and strong hearts. Roxie Watson plays it all out in empathetic memory of the women that took those first brave steps into the dark, narrow halls of the deep mines.

A week after the north-Georgia gig the band was back in Atlanta, playing a festival for the hometown crowd.

You can hear more from Roxie Watson on their debut CD, "True Stories." It premiered in January 2010, with two sold out shows at the ultimate performing songwriter's venue, Eddie's Attic, in Decatur, GA.

What did Eddie think?

"So you wanna start an all girl 5 piece bluegrass, folky, traditional, cover, original band that plays and sings like wily crafty veterans and harmonizes like the angels? You better go see and hear Roxie Watson, cause that's what they are doing. And not only doing ... but kicking booty and taking names!"

It's a slippery slope if one tries to compare one generation of musicians with another, but I can't help but think that, just maybe, Hazel Dickens would really like this band.

This story can also be found at the Hollywood Progressive. The coal mining video and narrative is new here.