Last week, my preschooler son and I were sitting in the waiting room at my daughter's orthodontist while she had an extremely expensive lip bumper installed. He rested his blonde head on my shoulder, chewed his Dubble Bubble and watched Disney Jr. on the television hanging on the wall. I held him in my arms and did what I do best -- people watched.

Adolescent boys and girls dangled their bored legs from the chairs and ran their tongues across bracket-covered teeth. They sighed and checked news feeds on costly cell phones covered in stickers while parents quietly thumbed through magazines and looked around the beautifully decorated waiting room. They admired the granite counter on the receptionist's desk -- luxurious stonework that their children's unsightly bite had bought.

My 4-year-old shifted in my lap and took my hand into his, as he so often does. He's a mama's boy, through and through, and he isn't ashamed to let the world know it through hugs and hand-holding.

As we sat together and he inquired about the whereabouts of our Elf on a Shelf (as he has done since last December), a teenage boy exited the back of the office and slowly shuffled to his mother sitting across from us.

Only he didn't say it in a respectful, "Hey, thanks for taking time out of your busy schedule and putting a second mortgage on our home to have my teeth fixed, Mommy," kind of way.

He said it in a, "I can't stand you, woman, now take me back to school so I don't have to be in your presence for one moment longer" kind of way.

And I unknowingly made a stink face.

His mother, only a few years older than I, appeared to be somewhat afraid of this boy dressed head-to-toe in Under Armour apparel. She quickly slammed closed her Nicholas Sparks book, grabbed her bulky purse from the floor and walked towards him.

"Did they get your bracket-" she began.

"Yes," he interrupted her, as if he couldn't stomach the sound of her voice.

I could see the hurt on his mother's face, as if she'd been shot down by her offspring one too many times.

The boy kept his distance from her. He shoved his hands deep into the pockets of his hoodie, twitched his shaggy bangs out of his face and sighed in discontent as his mother chatted kindly with the receptionist. He rolled his eyes at his their quiet laughter, pulled his phone from his pocket and began texting furiously.

"Would Tuesday or Thursday be better for your next appointment?" she turned to ask him.

"I don't care," he replied. And by the hateful tone in his voice, it was evident that he really did not care about anything his mother had to say to him.

"Will you have basketball on Tues-"

"Basketball practice is on Monday. Duh," he replied, never taking his eyes off the phone, which was probably paid for by the woman who he so outwardly loathed.

She looked embarrassed and quietly mumbled to the receptionist, "Tuesday will be fine."

At that point, I wanted to gently remove the sweet boy from my lap, rise to my feet, calmly walk to the teen and clock him right in his new rubber bands. I also wanted to hug the woman -- the woman who I assume bore him and bandaged his boo-boos and chased away the closet monsters and fed him and clothed him and loved and supported him. But, instead, I continued to watch in horror.

When she was done at the front desk, her impatient and ungrateful son was already out the door, 30 steps in front of her. I imagine he was the first one to the minivan, peeved that he had to wait a few moments for her to unlock the doors and let His Highness in. I also imagine the car ride back to school or home or wherever they were going wasn't full of jovial conversation, laughter and singing campfire songs.

However, I like to imagine that she expressed her disappointment in his disgusting, insolent behavior and threw his phone out the window as they sailed down the interstate. But, sadly, I doubt that happened. I think she's lost all authority in that relationship.

At that moment, I looked down at the sweet mama's boy in my lap, who voluntarily held tightly onto my hand. I thought about the precious bond that we currently possess and how I hate to see it disappear with time. I refuse to be my children's future doormat, but I know teenage angst will probably have an impact on our relationship.

Just that morning, he had the choice to stay with friends or accompany me to the boring waiting room. As always, he chose to "go with Mama." He wants to be with me. He wants to tell me mundane details about Ninja Turtles. He wants me to read to him, hold him and push him on the swing set. He never refuses to give me a hug or a kiss or a thank you.

He never says, "let's go," in an aggravated way (unless he's really tired and we're in the grocery store), but he says it in an excited tone that implies, "let us go, together, you and me." He doesn't keep his distance while I talk to receptionists. Instead, he's glued to my leg. He doesn't shove those little hands into pockets full of army men and sigh in disgust. He's content and all is right in his world when Mama is within sight.

Will this sweet boy who often rests his blonde head on my shoulder someday shut me out? Will the very sight of my face and the sound of my voice make his stomach churn? Will we become strangers? Will our car rides turn from games of "I Spy" to the silent treatment?

Will the teenage version of my son despise me?

And, like the mother in the waiting room, will I be powerless against it?

I can't even bear to think about it.

So, for now, I'll let him rest that blonde head on my shoulder. I'll share Popsicles with him on a summer day. I'll read his favorite book five times in a row. I'll let him crawl into our bed when thunder roars. I'll gladly hold his hand in the waiting room.

Because one day, instead of inviting me into his room to play superheroes, he'll probably be kicking me out. 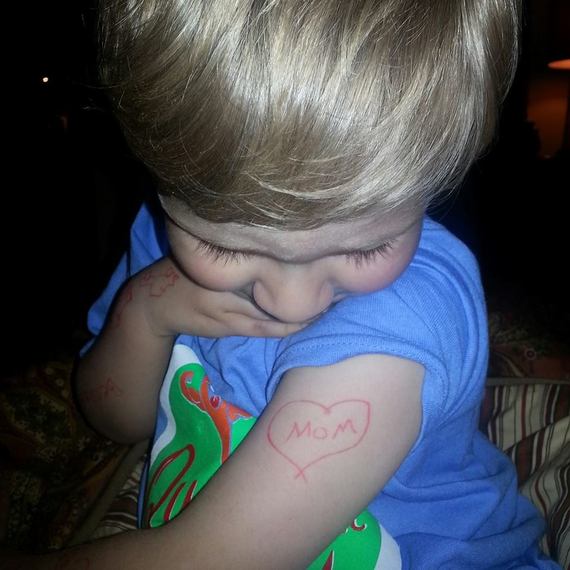 IUD Insertion Can Be Excruciating. Why Aren't Patients Given Help?