Hold These Truths at Seattle's ACT Theatre is a simple yet stunning one-man show inspired by and based on the life and heroism of Gordon Hirabayashi, one of only three Japanese Americans who refused interment during World War II. Hirabayashi's heroic stand against the United States government and the prevailing sentiment of fear and prejudice is brilliantly portrayed by Ryun Yu on an essentially bare stage with only three chairs for props. 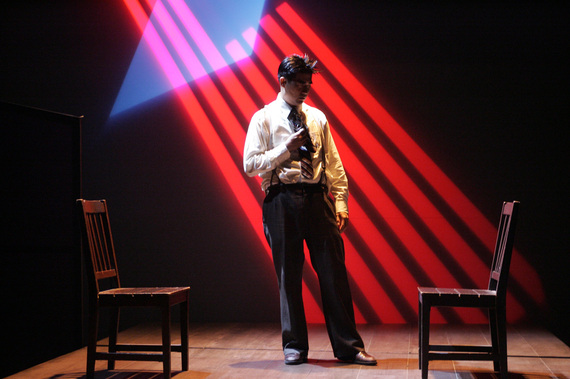 Mr. Yu delivers Mr. Hirabayashi's story in a heroic fashion as a ninety-minute, no-intermission monologue in which he also portrays other characters necessary to the story. What's even more amazing is the Mr. Yu uses the entire stage plus the aisles of the theater as he performs and moves to share Hirabayashi's life from boyhood through his successful career as a professor. The show also includes the 1987 successful overturning of the verdict against Hirabayashi.

This is a performance that at times moves the audience to tears while including several truly laughable moments. One is when Hirabayashi offers to pay for his own transportation to a prison camp in Arizona because the government determines that the transportation is too expensive for them to cover.

Hold These Truths is a show that parents might want their teenaged or older children to see as it portrays that with courage one person can stand up to and triumph over almost anything. I took my 26-year-old son, and although he's not really into theater, he was thoroughly moved by the show, and it inspired an interesting post-performance conversation between us.

All in all, Hold These Truths feels like watching a single man run a perfect marathon in order to tell a story that needs to be shared again and again. The play runs through August 16 at ACT.