In the five years since his mother castrated him, Holden Gothia has undergone intensive medical treatment and has also learned to just be a regular kid.

When he was 5 weeks old, Holden’s mother, Katherine Nadal, sliced off his genitals in a drug-induced haze –- a horrific crime that landed her 99 years in prison, according to Chron.com. Since the assault, the Texas boy has developed an exuberant spirit. He loves to play the drums, hang out with the family dog and sing his heart out, myfoxhouston.com reports.

But the 5-year-old has also started to ask questions about his body.

“I think in his mind, genitals are something he gets when he gets older,” Holden’s aunt, Patches DeShazo, who adopted him, told myfoxhouston.com, “and the response to that comment is: you're exactly right, you will, when you're older, which is not untrue."

Holden has already undergone numerous painful –- and expensive –- procedures, and will eventually get reconstructive surgery, which is estimated to cost half a million dollars.

"The physical part can be fixed,” DeShazo told myfoxhouston.com, “It's the emotional part that I do worry about the most.”

His adoptive family has unconditionally stood by his side and has appealed to donors to help Holden on his path to recovery.

In launching the nonprofit Heroes for Holden, the boy’s family hopes to raise enough money for Holden’s surgery and medical bills. His relatives also plan to expand the mission to include helping other children struggling to pay for costly treatments.

Earlier this month, the organization held its second annual benefit concert, an event that brought in $240,000 last year, according to the Daily Mail.

As Holden continues to thrive, his aunt remains certain that the way he is working through this nightmare of an experience will have a positive impact on others.

"His story is his story, and, as horrible as it is, I truly believe it will be hugely important to other people," DeShazo told Chron.com. "He's an inspiration. It's an inspirational story."

Feeling inspired? Learn how you can help Holden recover here. 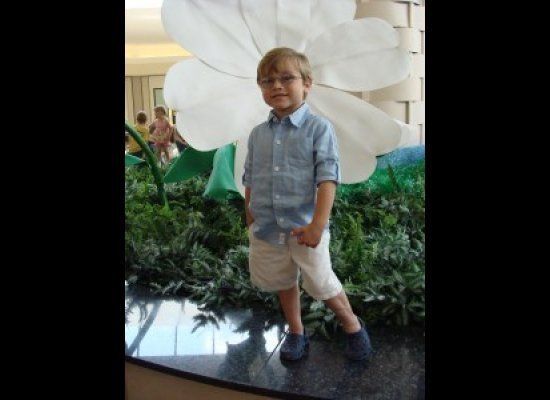 1 / 5
Holden Gothia
When Holden Gothia was just 5 weeks old, <a href="http://www.chron.com/news/houston-texas/article/With-adoptive-family-s-help-mutilated-boy-s-1685676.php" target="_hplink">his mother severed his genitals</a>, a horrific crime for which she is serving 99 years, Chron reports.
Heroes for Holden