What's the least controversial statement anyone could make about health care costs in the United States?

Drug prices are out of control.

No one really disputes it, and the real question is, Do we have the political will to do anything about it?

If you look for answers from the pharmaceutical industry, the answer you get is simple: Research. As one Pfizer executive put it:

"Here's the reality: Most of the medicines we develop in our labs will not make their way to patients ... To make up for the risk and expense inherent in creating new medicines, the few medicines that are successful must cover the research and development costs of the many clinical failures that will never earn a single cent. It's easy to forget that profits serve an important purpose: they allow businesses to invest in the innovations of the future."

Makes sense, right? Consumers are paying for the overall cost of developing different therapies for different illnesses. Except that this rationale doesn't come close to explaining what actually drives drug prices.

This private rationale is much closer to the truth. Just look at the regular and sizable price increases for drugs that have already been brought to market, where the research is already completed. Every year like clockwork, Biogen and Teva have increased the prices on their multiple sclerosis drugs not because they are doing more research on the drug but to maintain revenue and profits with shrinking market share.

Most importantly, look at how pharmaceutical companies actually spend their money. Research does not dominate. Rather, more of the money goes toward funding marketing budgets and realizing profits. As the following table shows, only one of the nine largest drug companies spends more than 20% of revenue on research. For all but one company, marketing exceeds 20% of revenue, and exceeds research spending. No one argues that companies should not spend money on marketing or should not make profits, but to claim that research is the reason prices are so high, well that is a bit disingenuous if not deceptive. 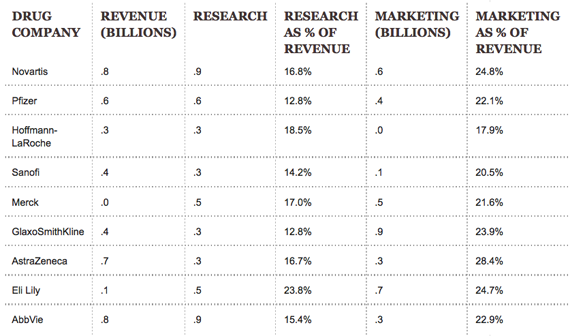 It turns out most of the big drug and biotech companies have produced double-digit profits, some higher than 50%. In 2012, drug companies had average net profits of almost 20% -- twice the 9% average profit margin of the S&P 500 companies.

Two things are pretty clear. First, all of us want drug companies to continue doing research and developing truly innovative new drugs that can cure hitherto untreatable illnesses like Lou Gehrig's disease or pancreatic cancer or Alzheimer's. Patients -- and all of us, even those who are healthy today, will eventually be patients -- need new therapies.

Second, the market is not going to solve the drug cost and research problem. The reason is that there is no market. Patent and FDA marketing exclusivity provide drug companies an effective monopoly. And normal consumer behavior is virtually absent. There are several layers of middlemen in drug purchasing -- sales reps, pharmacists, prescribing doctors themselves -- and neither patients nor doctors pay the full cost of a prescription, so the actual end consumers never weigh the financial costs against the personal benefits, as they would with any other good or service. We need non-market solutions.

There are several approaches that could work separately or be complimentary. One is to ensure there is a relationship between drug prices and research investment. This approach would be similar to the Medical Loss Ratio (MLR) policy in the Affordable Care Act, which requires insurance companies to spend at least 80 or 85% of their premium revenue on actual health care (rather than profits or administrative costs), and has actually helped moderate health insurance premium increases. Like the MLR policy, this proposal would require drug companies to spend a certain proportion of their revenue or invested capital on research, holding them accountable for their rhetoric on research spending. If the percentage of their research budget is too small, then they would be assessed a penalty that would be given to biomedical research institutions, like the National Institutes of Health, which generate the basic research that drug companies later develop into actual drugs. This kind of proposal would certainly have moderated the price of Sovaldi.

The proposal would not apply to any particular drug. Rather, it would apply to a company's whole research enterprise. So if a company spends money, but the experimental drug never gets FDA approval or makes it to market, they still get credit for the money spent on research. This is key, because it goes along with the claims that pharmaceutical executives already make about the high cost of profitable drugs paying for the research of other drugs that are clinically significant but not as lucrative.

One excuse drug companies give for not spending more on research is that there are not enough good leads or targets for drug development. This seems highly improbable. Between the human genome project and the surge in new-venture-funded biotech companies, we have thousands of drug targets to pursue. And with recent reductions in NIH funding, there are plenty of "hungry" researchers and trials out there waiting for funds. Alternatively, if there really are insufficient areas for useful drug research, then drug prices could be reduced.

Ideally, we shouldn't have to tell drug companies how to spend their money. But government-created monopolies and super-high drug prices make it hard for many patients who need certain medications to afford them -- in turn driving up the overall costs of care. If the experience in the health insurance arena is any indication, this "MLR type" proposal is an effective way to hold drug companies accountable, maintain investment in research to improve health care and keep prices under control.

Another approach would be to link pricing to the FDA approval process. The FDA could fast track drug review processes for those drugs that provide competition, say another anti-hepatitis C drug, or for ones in which the manufacturer promises to keep the prices below an affordability threshold that could be set by cost-effectiveness.

The third approach links drug prices to the degree to which they actually improve health. Everyone is demanding more value from doctors and hospitals, why not drug companies? What is value? In a market with Big Macs and Whoppers, goods are priced at whatever the market will bear. In the case of pharmaceutical monopolies, we should apply the common-sense notion that the price of a good or service should bear some relation to the benefits it provides.

One way of measuring whether a drug's price represents good value is by dollars per quality adjusted life years, or QALYs. A QALY measures both the quality and the quantity of life gained from a drug or another medical intervention. Dollars paid per QALY measures the value of an intervention. In England they use a flexible target of about $45,000 per QALY as good value. Other experts suggest good value might be priced at $100,000 or $150,000 per QALY.

There was controversy about the $1,000 per pill hepatitis drug Solvaldi, but given that it cured about 90% or more of patients with a 12-week treatment, it was widely considered a reasonable value costing about $47,000 per QALY. On the other hand, a lot of people ask whether a cancer drug like Farydak that provides no cure but extends life expectancy by an average of 4.8 months is worth the $110,000 price.

Consider the new cholesterol drugs, PCSK-9 inhibitors, that are aimed at lowering bad LDL cholesterol. The cumulative data suggest that they reduce LDL-C by nearly 60% compared to placebo and by 36% compared to existing treatment. But their improvement of overall health is uncertain because we don't yet have accurate data on the drugs' impact on the rate of heart attacks, strokes and deaths from heart disease -- that will come out in 2017 or so. Objective researchers suggest the improvement could reduce a patient's chance of a heart attack, stroke or death from 3.3% to 1.7%.

The companies priced these drugs over $14,000 per year per patient. That is retail and with discounts and other reductions it is unclear what the prices actually paid will be. Are they a good value? Is the health improvement created by these drugs worth the price?

According to a recent calculation by an independent drug assessment organization, the Institute for Clinical and Economic Review, these PCSK-9 inhibitors will cost more than $300,000 for every (QALY) they add. This is widely considered too high and a very low value. The prices would have to drop to under $5,000 to be deemed a good value at the $150,000 per QALY level.

Some people object to using dollars per QALY as a measure of value. Indeed, they really don't believe value could or should be measured and used to set drug or other prices. Former Representative Tony Coehlo, who has epilepsy, puts it this way: "Research on treatment value requires asking questions and measuring outcomes that matter to patients, and delivering care in ways that empower patients to make decisions based on their individual circumstances, needs and treatment goals." Presumably how much a drug extends life and the quality of life matters to patients, so QALYs provide patient-relevant information.

Interestingly, in the U.S. the government sets the price it will pay for hospitals, doctor and home health care services, CT and MRI scans, so why shouldn't it set prices it will pay for drugs?

Americans, and large American employers that provide health coverage to their workers, hate government price regulation. But they also hate super-high drug prices and a sense that they are getting ripped off compared to citizens in other countries.

The next few years seem like they will be filled with debates about how to address drug prices.

The MLR proposals, changes in FDA review policies, and government price regulation are going to be at the top of the policy options being debated.

Ezekiel J. Emanuel, M.D., Ph.D. is the Vice Provost for Global Initiatives, the Diane v.S. Levy and Robert M. Levy University Professor, and Chair of the Department of Medical Ethics and Health Policy at the University of Pennsylvania.