From one perspective, the undulating and gyrating masses (thousands upon thousands at any given time and throughout the weekend in March of this year) could have been observed at any number of places: a rock concert, a dance club, or a college party. But this context was rather different in comparison -- here, on March 28th, 2015, on the hallowed grounds of the Lotus Temple in the high desert of Spanish Fork, Utah. The crowd, after all, was almost entirely white teenagers who were Latter Day Saint affiliated. But what would, could, and should draw these people to a Radha-Krishna temple in the middle of the Mormon mecca? 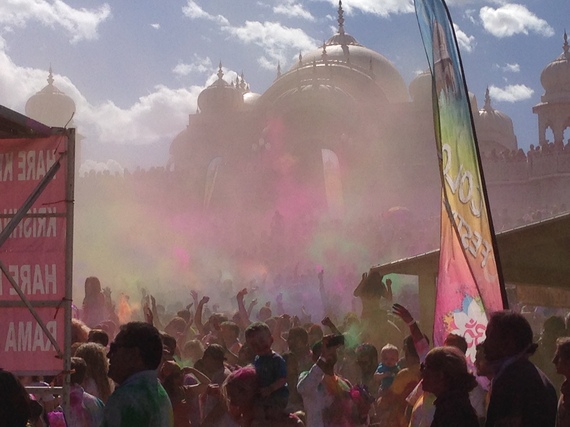 Conversations that I had with attendees who were LDS seem to shed light on why. One young woman explained that she was attending because it was "a spiritual experience," that she "felt unity," and that it was a way for her to experience "god." Her friends, also LDS, concurred with her. When I asked her if her experience conflicted with her LDS world she strongly denied that it would. She explained that the spiritual experience in both the LDS and the Holi Festival worlds were "identical," and, most importantly, "that there were many paths" to the same experience. Her friends all agreed with her pluralistic perspective.

And, ere all mystical experiences the same?