At least every seven years or so, and predictable many months in advance, our planet pushes the reset button on our oceans and atmosphere. The big event begins in the South China Sea and quickly spreads to encircle our planet. Few living things are spared its influence. 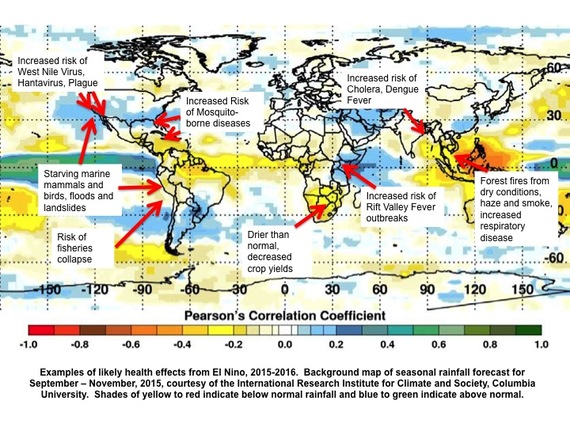 During the normal times between these events, westerly trade winds steadily push the surface of the Pacific Ocean all the way across to Southeast Asia. There, the water warms under the equatorial sun and evaporates to create the rain which makes the region the lush tropical part of the world we all know about. On the Americas side of the Pacific, cold, nutrient-rich water from the two poles and from deep in the ocean rises up to fill the gap, feeding an abundant coastal marine life, drying the air, and keeping surfers in their wet suits. When this circulation comes to a halt and the massive warm wave of water sloshes back across the pacific, the world, economies, and even our health changes dramatically for a year or two.

For many decades, Peruvian fisherman noticed that every-so-often their catches dropped dramatically near Christmas time. They named the event for the baby Jesus. We now know that El Niño or what scientists call an El Niño South Oscillation Event not only affects the seas and weather of the Pacific, but also manifests itself dramatically around the world with droughts and fires, storms and floods, famine and disease. While we might not be able to control the weather, we can do a lot to reduce adverse consequences. Thanks to NOAA and NASA and modern weather forecasting capabilities, the world now has actionable information many months in advance.

This year's El Niño is looking to be as big as ever and the repercussions have already begun:

California has now warned against crab harvesting because the warmer coastal waters stimulate the growth of toxin producing algae. The toxins accumulate along the food chain through shellfish, shrimp, crabs and fish and not only kill sea birds and sea lions, but can kill people too. Bans and warnings may not protect sea life, but at least they can reduce the toll on people. Unfortunately, the economic impact to the crab industry this year is estimated to be 60 million dollars, and the effect could spread up the west coast of the U.S. to Oregon and Washington.

Forest fires intentionally set in Indonesia to clear the land to plant oil palm plantations and other development efforts are burning out of control, inflamed by the unusually dry weather caused by the El Niño event. The fires were predictable and avoidable. The smoke from the fires has gotten so bad that airports and schools are closing in neighboring countries and cases of respiratory disease in people living in a haze every day has increased dramatically in Singapore and Malaysia. One report indicates more than 500,000 cases of respiratory problems.

Fish harvests along the coast of Peru will be affected. Not only do the fish provide basic income and sustenance to local people, they are used in fish meal supplying a huge poultry industry in the region and are the only source of food for tens of thousands of seals and sea lions and millions of cormorants, pelicans and penguins. During an El Niño in the late 1990's, sea bird populations at one colony alone crashed from over 3 million birds to several hundred thousand (90% mortality) and have never recovered. Reducing fish harvest quotas during El Niño events can reduce the adverse impact on wildlife immediately and allow for fish stocks to recover more quickly in subsequent years to support the fishing industry. 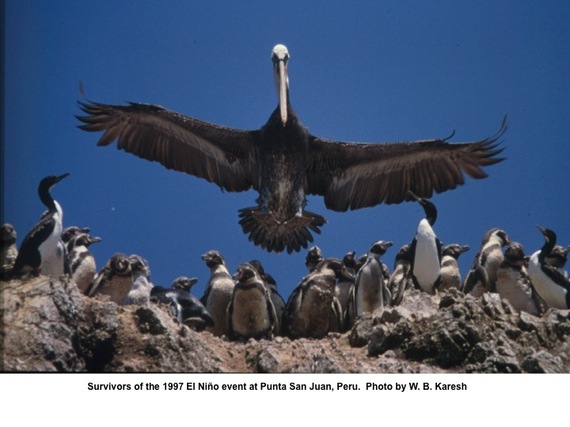 In eastern Africa, rains are already exceeding normal amounts and a normally rare disease called Rift Valley Fever is expected to rise soon. The deadly virus is transmitted among animals by mosquitos and can infect people working around them. There is no cure for the disease but there is a vaccine that can prevent outbreaks in animals before the disease spreads to people. Countries at risk could mobilize vaccine campaigns that would protect local economies, the livelihoods of small livestock holders and their lives.

On a broader scale, El Niño rainfall predictions for the Americas, Asia, Europe and Africa warn of an increase in diseases over the coming year. We can expect to see more malaria, and cholera in parts of South Asia and Africa; Chikungunya virus and dengue (break-bone) fever in the Americas and Southeast Asia; and West Nile virus, hantavirus and plague in the western U.S. Millions of calves in the southern U.S. are at risk of copper deficiency disease because the lush, rain-fed grass is lower in micronutrients. All of these are preventable and in some cases treatable diseases. We should be prepared.

Globalization, modern communications technology and transportation are all credited with linking us together around the world. But another and hopefully the most beneficial, is the growing recognition that human health, the health of plants and animals, and the health of our planet are inextricably linked. Some like me call this One Health or think of it in terms of Global Health Security. Regardless of what you call it, we have the opportunity now to save lives if we take action. If there is a gift hidden in the coming of an El Niño this holiday season, it may well be that we've be warned about it for a few months.