If you've read any of my blog posts and seen the accompanying pictures, you can tell I have some serious style. Is it everyone's cup of tea? Not so much. And like most people, my toughest critics are my family. In my world getting an eye roll from my grandmother at Christmas is the equivalent of ending up on a worst-dressed list.

Although my grandma liked to dress to the nines in her heyday, her style is pretty low-key nowadays. She, my mom and aunt prefer to shop the sales at JCPenny or Kohl's for button-down cardigans and sensible shoes. They're all about comfort, practicality and saving their dollars. So you can guess that my flashy clothes and occasional splurging at big time stores like Opening Ceremony doesn't really make sense to them. Not to mention the idea of spending as much as I do on used vintage clothes over the internet seems completely insane. They've never been outright mean about my sartorial choices, but they've definitely silently (and not so silently) disapproved over the years.

It wasn't always this way. When I was little my mom and grandma bought all my holiday dresses. You know the ones with the puffy shoulders, white bib thing in front and a bow tied in the back. That lasted until I was about seven, when I starting developing opinions about what I wore. Think typical '90s wear: Skechers, lots of stretchy, sparkly synthetic things and chokers. After my style epiphany in junior high, I started to get even more into clothes and what ensued was series of fashion highs and lows (but mostly lows). 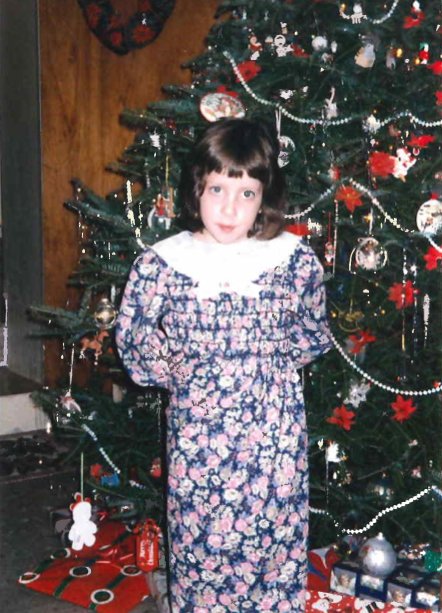 Every year I was into something new, and every year my family was just as perplexed by my sartorial choices. There was the year I showed up to an Easter party at a Bronx Chinese Buffet in full on goth mode. Yes, there was lots of black eye liner and scowling. My grandma looked scared the whole dinner and later whispered "are you one of those gothics?" My mom gave me a sassy mom-look afterwards (you know the one) and asked if I "really needed to wear all those safety pins?" and "didn't I have a shirt that didn't have holes in it?" No one seemed to get or appreciate that I had spent an hour carefully cutting the holes myself, and that it was a style choice.

Soon I discovered eBay and got into an '80s-club kid-M.I.A. impersonator thing that my mom affectionately called my "clown look." The rest of my family was similarly unimpressed with my acid wash jeans and rainbow-colored kicks. And then there was the period of time in high school that I described myself as "arty" on MySpace and got really into D.I.Y. By D.I.Y. I mean cutting up my old pairs of underwear and appliquéing them onto tank tops and jeans (this really was a thing...for a while). Basically everything I wore for a good two years was total Regretsy material. The response by my family was always the same: "You have such a great figure why do you hide it?" or my grandma's simpler "Mama Mia." Both were code for: stop assaulting our eyes with your bad fashion.

By the time I got to college I had given up and stuck to boring toggle sweaters and jeans from Urban Outfitters around the family. It certainly wasn't the worst look, but it definitely wasn't me. Now I'm way more confident with my personal style and have a somewhat consistent look (at least I gave up the underwear thing), but the struggle with being myself and impressing my family continues.

For the past year I've worn the same blue lace dress to multiple family gatherings: Christmas, barbecues and even casual trips to visit my mom. My best friend (and fashion consultant) totally called me out on it and said "you only wear that dress when you go home." She was right. The knee-length baby blue dress would never go on my style blog or make it out to a party I just wore it because my family approved of it. So I sold the dress at Beacon's Closet and used the money to buy some tie-dye shirts and an ugly sweater because I won't let my family compromise my style anymore. But they've also come a long way, too. When I dyed my hair pink, my grandma said: "I get it, you're avant-garde. That's what being young in the city is all about." I think that's the most approval I'm going to get.