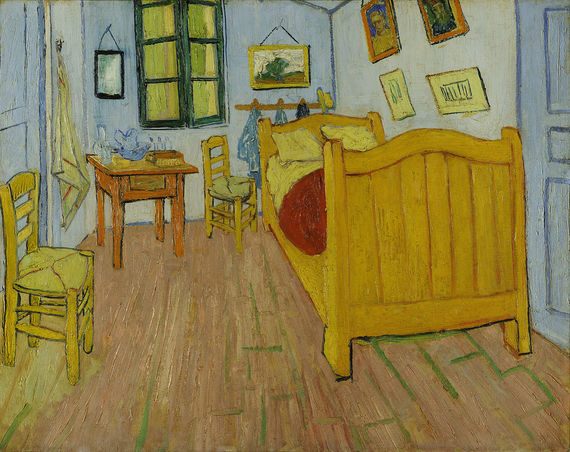 For Vincent Van Gogh, a chamber of loneliness.

We all know about the dark side of the holidays: the pain of the lovelorn; the stress for the recovering alcoholic; the torment of parents who cannot provide gifts, even homes, for their children. Then there are those who bear loss: loss of employment, loss of a parent, loss of a partner and, most sad, loss of a child. And there are those who are shut-in, alone, and possibly hungry; others are in pain, physical pain that defies amelioration.

In the holiday season, my thoughts are about those who suffer from Myalgic Encephalomyelitis (ME), also known as Chronic Fatigue Syndrome (CFS). Its sufferers are walled off in plain sight, jailed by a disease that has no known cure and promises only suffering -- by the day, the month, the year, the decade.

The government estimates that as many as 1 million Americans and another 17 million people worldwide are imprisoned by ME. Little is known about it, and nothing about the causes. It is understood to be a disease of the immune system, but there are those who want to believe, and have convinced some governments, that it is a psychiatric affliction. It is easier for government institutions, like Britain's National Health Service, to believe in psychiatric nostrums than to treat and research the terrible suffering of the sick, the physically sick.

ME patients can be bedridden for years, unable to tolerate light or sound, and must rely on families or friends for basic needs. Sometimes they may seem a little better, but they cannot do the things of normal life. They are vulnerable to collapse after exercise or just normal activity.

Patients tell me that they know too well what my friend, colleague and ME sufferer Deborah Waroff says is the excruciating loneliness that comes with the induced isolation. It is the kind of loneliness that moved the 17th-century English poet John Milton to say, "Loneliness is the first thing which God's eye named, not good."

How often can a caregiver ask, "How are you feeling?" when the answer is known; was known yesterday, last year, and the year before, going back decades.

One sufferer told me she thought, in the height of her suffering, that she was already dead and was in limbo. Many sufferers have written to me saying they pray that they will not wake in the morning.

Suicide rates are high. Surely, suicide must be preceded by a loneliness that cannot be imagined? ME victims - and I have interviewed or had correspondence with hundreds -- feel that not only do they suffer from symptoms which vary from pain in the joints, a sense that their limbs are exploding, headaches and mental fog, but they also have debilitating fatigue. Deborah Waroff, who has suffered since 1989, says it is like being a car that has no gas: You press the accelerator and nothing happens. She, like other victims, has to ration her social life: a dinner with friends will result in collapse, and two or more days in bed. Likewise, going to a movie or a family gathering. Sometimes just making a simple meal is too much, and results in a return to one's lonely bed.

Doctors, once they have decided that a patient has the disease, and if they have any knowledge of it, prescribe a variety of drugs from antivirals to large doses of vitamins. Some help with some symptoms, some do not. Ryan Prior, a young man who has made a documentary movie about ME, "Forgotten Plague," takes as many as 19 pills a day. He was a star athlete in high school before being stricken. Now he manages his activities with stringent care. He is one of the lucky ones.

My correspondents from around the globe write to me about many things, but the most constant is their loneliness, exacerbated by the holidays. Marriages fail, love affairs go by default, and one is terribly, awfully alone.

There is aching aloneness for them each day, while others laugh and love. Mother Teresa said, "Loneliness is the most terrible poverty."

That poverty is part of this disease.