**SCROLL DOWN FOR BIG UNRETOUCHED PHOTO**

Holly Madison has allowed unretouched bikini pics of herself to be published in Life & Style, and she tells the magazine how she felt when the producers of 'Peep Show' told her to lose weight.

Holly also recently appeared in a bikini for her Svedka vodka ads.

After being slammed for gaining weight, Holly's World star Holly Madison bravely shows of her curvy body - flaws and all - for an exclusive unretouched photo shoot with Life & Style.

"I'd rather be overweight and curvy than super thin with no curves," Holly, 32, exclusively tells Life & Style at the photo shoot on Feb 21. "I'm proud of my body."

For good reason: Holly has a figure most women would envy. And yet, Holly isn't afraid to admit that her small stature doesn't exempt her from what haunts millions: cellulite. "I have cellulite - and had it even when I was at my absolute thinnest," she tells Life & Style. "I'm never not going to have cellulite. People need to just accept that it's there and maybe dress accordingly or use body makeup to cope with it."

Still, when Peepshow's choreographer and director instructed Holly to shed weight - after she'd gained 15 pounds following her move to Sin City - she was hurt, she confesses. "Once I realized that other people were noticing that I'd packed on a few, I was embarrassed to go onstage," she reveals. Making matters worse: her Holly's World nemesis, model Jayde Nicole. "Holly needs to lose 10 pounds of fat," Jayde, who once cattily sent Holly a basket full of candy when she knew her co-star was dieting, recently told Life & Style.

"After moving to Vegas, I lived in a suite in Planet Hollywood for a year and ordered room service all the time," Holly says. "I like food too much to go on some crazy diet. French fries are my favorite downfall." Holly also says she's not willing to give up sweets but she has decided to make some healthy changes: Pilates classes and 20-minute runs, and mixing prepared meals from the Fresh Diet delivery service into her menu.

"I've always had a butt, and I want to keep it - cellulite and all. I'm not perfect, but I love my curves." Holly tells Life & Style.

Check out more exclusive unretouched photos and our full interview with Holly Madison in the new issue of Life & Style, on newsstands now. 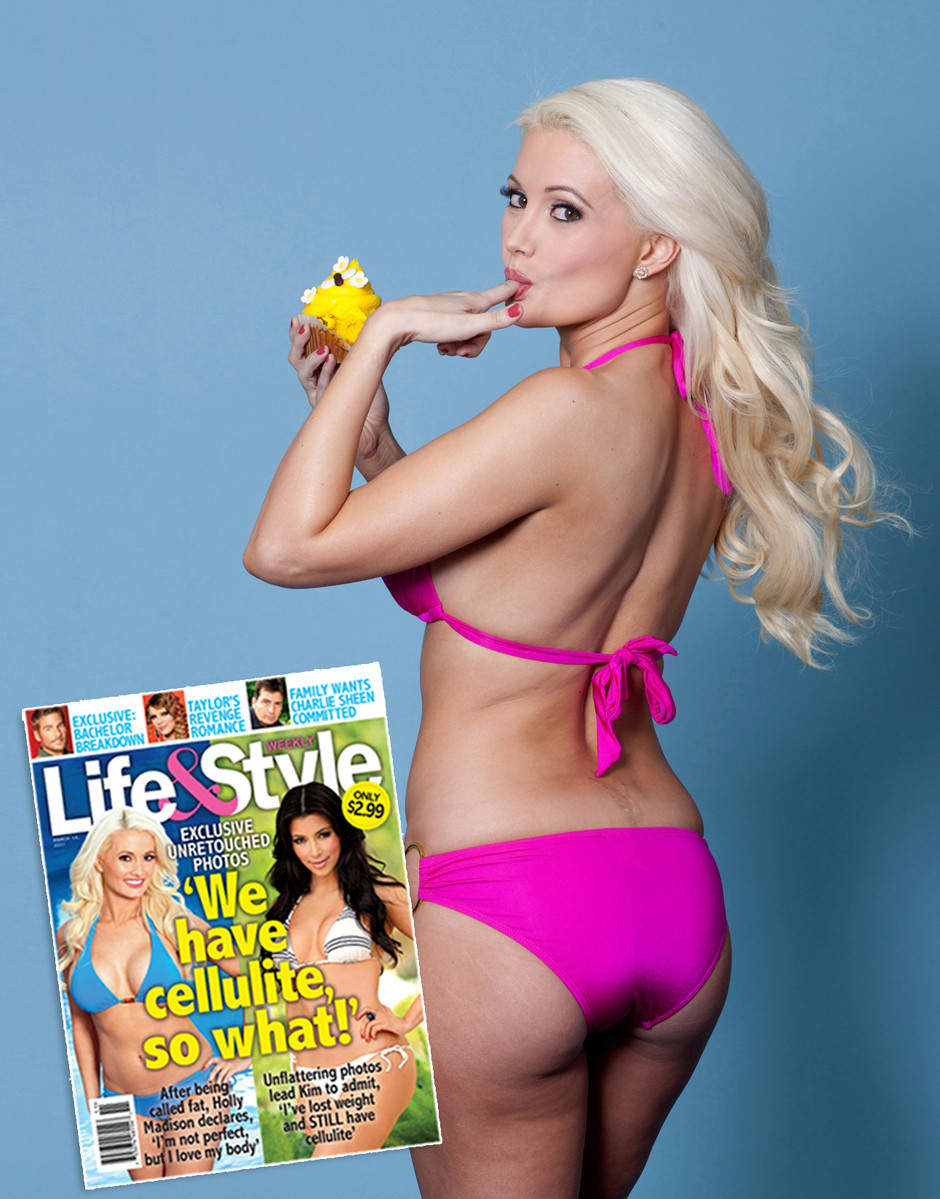