I wonder if the less than stellar results of the last Oscars, with its low voltage and sagging viewership, will make the Hollywood weasels -- clearly in need of help and inspiration -- turn to the world of art. For example, the Venice Biennale and Basel Art Fair could definitely offer a few pointers on how to put on a razzle dazzle show. Or the Academy could go for advice to Larry Gagosian who knows a thing or two about swimming with the sharks of the worlds of Hollywood and art.

Once again, on the eve of the Oscars, his gallery in Beverly Hills went all out with an art show and glamorous party both targeted at celebrities flooding the town. Did you know that well-esteemed film director Gus Van Sant is also an accomplished painter? Several of his large-scale watercolors portray young male models and are hung in the narrow corridor-like space leading to two screening rooms. On opening night, you could view two films assembled by the current Hollywood darling James Franco, who cleverly remixed unused footage from the 1991 movie about street hustlers, My Own Private Idaho, the best-known work by Gus Van Sant. The first film by James Franco is a little bit over an hour but the second runs a full 12 hours. With all the effort that the actor had to pour into finishing these movies just in time, I was not surprised to see him hosting the Oscars a day after the Gagosian party as if he were slightly distracted and tired. 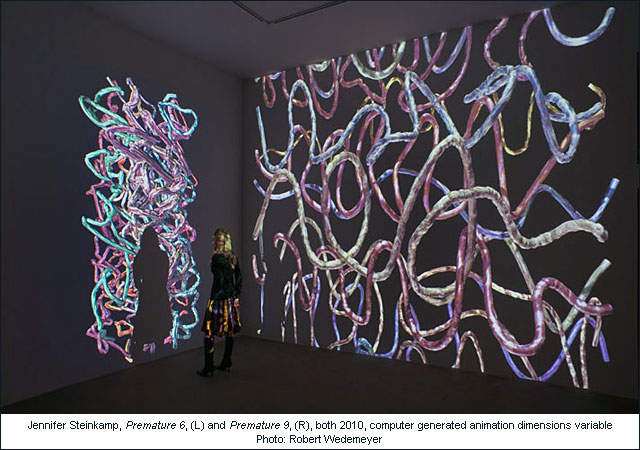 I also wonder how the clever ladies and gentleman of the Academy would react to the fascinating and rather theatrical computer animations by Los Angeles-based Jennifer Steinkamp at ACME Gallery. Her digitally animated works are projected on large walls, creating an illusion of moving, breathing medieval tapestries. 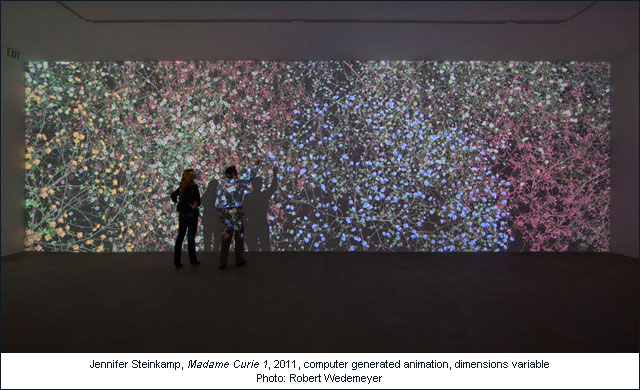 Especially appealing are the ones inspired by Madame Curie, two-time Nobel prize winner who discovered radium and polonium and coined the term "radioactivity." Jennifer Steinkamp's computer animations would be sensational being projected on the proscenium of the Kodak Theater for the next Oscars ceremony, though it might overwhelm a number of the nominated movies with lesser visual appeal. 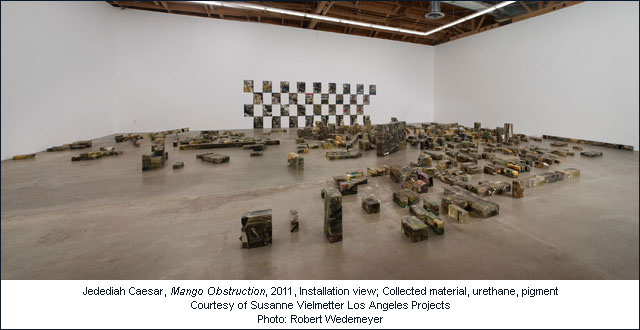 And what, I wonder, would Hollywood weasels say upon being confronted by a pile of garbage magically and effortlessly transformed by L.A. artist, Jedediah Caesar, into jewel-like sculptures strewn across the floor of Susanne Vielmetter Gallery. Yes, you heard me right: the artist collects all sorts of junk. He stuffs it into long wooden boxes and pours resin over it. Once the resin hardens, he slices these large, heavy "fruitcakes" into thin slices and places them in rather formal arrangements on the wall or seemingly incidental clusters on the floor. 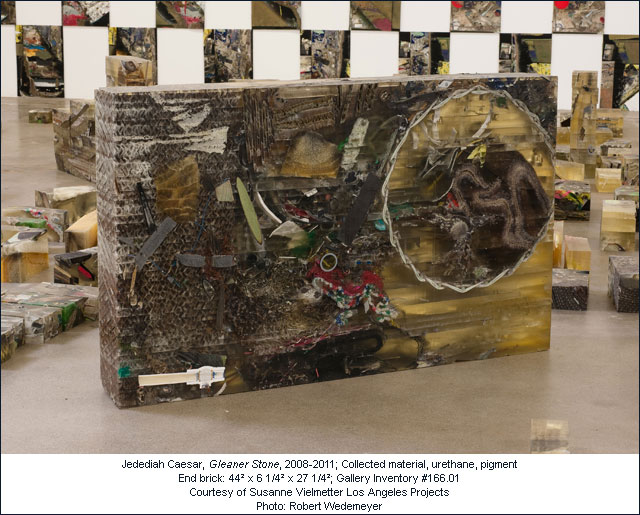 One way or another, here is an eloquent and irresistible transformation of the mundane into pure magic. In my humble opinion, with his impressive talent and melodious name, would be a great artistic advisor to help the Academy shape its future Oscars into works of art.