Our experience of Harold Pinter's The Dumb Waiter, directed by Landon Johnson for Vespertine Productions at The Flight Theatre at The Complex Theatres, is not so much that of a fly on a wall; a fly's buzz would unbalance Johnson's tersely orchestrated suspense tale of two hit men in a Birmingham basement. It's more like eavesdropping on the men's exchanges through the paper-thin walls. The dialogue is perfunctory, almost tedious: the recitation of how an 8-year-old girl killed a cat, of how a man got smushed under a truck; requests for tea, for meals, as communicated via a dumb waiter that, given its context, reads more like a guillotine. The room is drab, UPS brown-toned. Like gyroscopes draped in tweed, the men maintain their perfect, individual orbits, until that last, explosive moment. 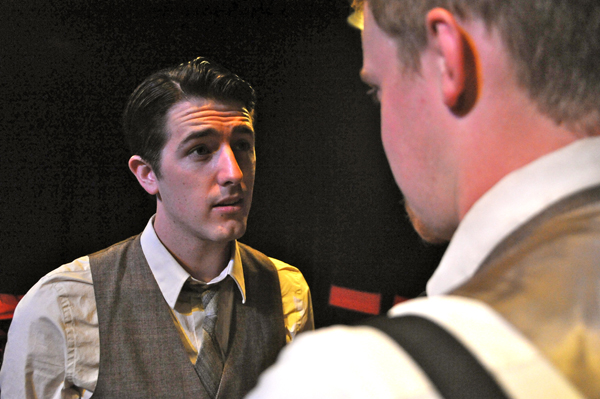 What Johnson understands (and subsequently nails) is the story's businesslike tone. Just two out-of-town schleps with a job to do. He sets it up so that we think that nothing of substance happens until the moment the lights suddenly drop; psychologically, in fact, things have been happening all along. We don't know the nature of the mission until one of them pulls a gun. With ingenuity and nuance, he compartmentalizes the cluelessness of the men; they had a job but the particulars were need-to-know. The hierarchy was well established. Ben (a taciturn Jordan Randall) was the boss to Gus (a restless Krisopher Lee Bicknell). But both, to gauge by the squalid setting, by the way they spring to attention at the sounding of a disembodied voice that issues from the dumbwaiter, are low men on the totem pole. 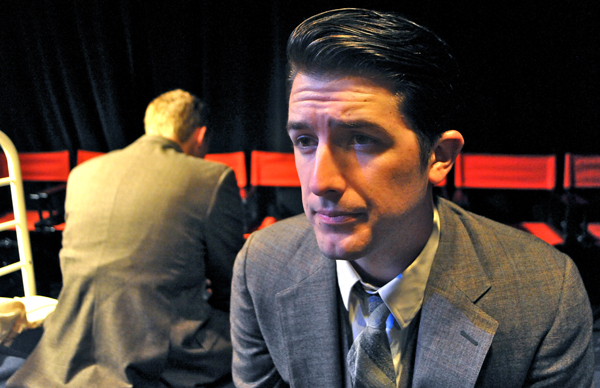 What Randall and Bicknell understand (and subsequently nail) is that they're foot soldiers, like John Travolta and Samuel L. Jackson in Pulp Fiction, following orders, killing time. Particularly effective was how they talk about things mundane (soccer, a cup of tea) in the same tone of voice that they discussed the hit. Just another day at work. Bicknell and Randall play it like a mouse and a snake. Bicknell nervous; he darts around, takes orders, asks questions, ponders the identity of the victim. Randall calculating; stationary, perturbed at being interrupted as he reads his paper. And then... 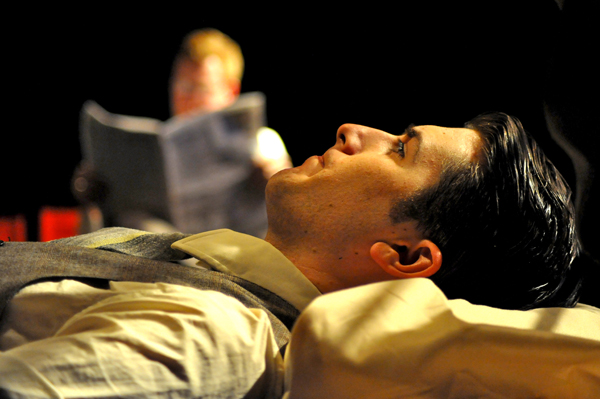 Red herrings (matches in an envelope slide under the door; food orders echo from a sepulchral dumb waiter) don't move us. The waiting does. Things crescendo to the realization (surprising to them, startling to us) that, as per the Dire Straits, sometimes you're the windshield, sometimes you're the bug. Who's the victim? Ask John Donne. 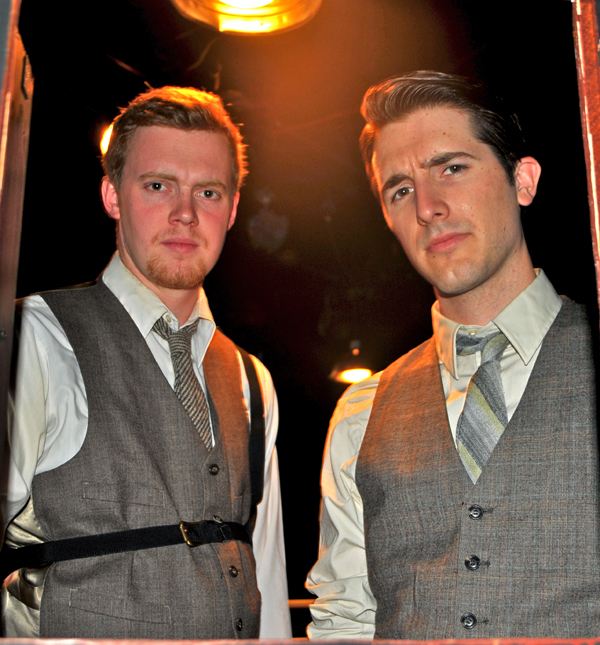 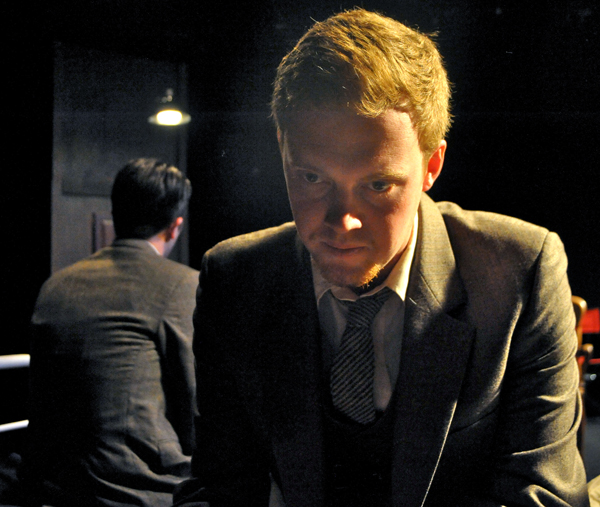 Girl Band in the Men's Room

It may be set in 1994, it may bespeak an historical era of music, of feminism, of counterculture; but the story behind Girl Band in the Men's Room, written by Robert Ford, directed by Michael Kortlander for Dirty Blonde Productions at The Annex, ArtWorks Theatre is timeless. 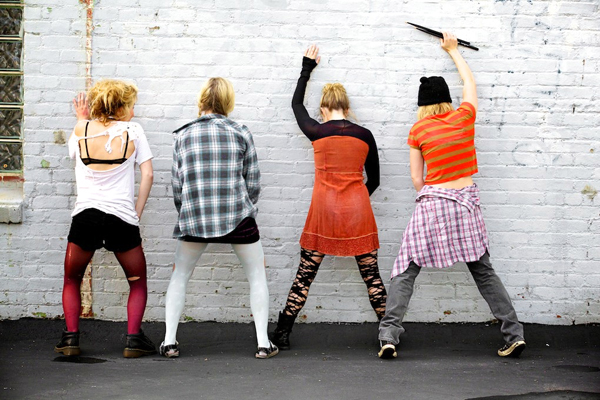 Showing the keen compatibility of Fringe and Grunge, the production stages four women about to sign on with a record label. Though on the cusp of success, various crises threaten to splinter the group. Rachel (Katherine Skelton), the guitarist, frets; dump Mom, get a professional manager. Nice image: she lays her strings out on the floor, like a spider's web coming unraveled. Murphy (Lisa Summerscales), the drummer; squirms with nervous energy. Antsy for success, too much in her head, she considers defection with Merce (Kat Primeau), the singer, sultry and cool, seemingly disinterested, not beyond considering a side deal (or at least a tryst) with a label guy. Summerscales wields her sticks like a dick (the hilarity when she mimics the guy at the urinal). Lindy (Erin Boyes), the bassist, fiddle-dee-dees the Big Moment like Scarlet O'Hara. The atomization presented here makes that final moment of crossing the threshold of the loo door all the more moving: despite their squabbles, they manage, half-cocked, to approach the stage as one. 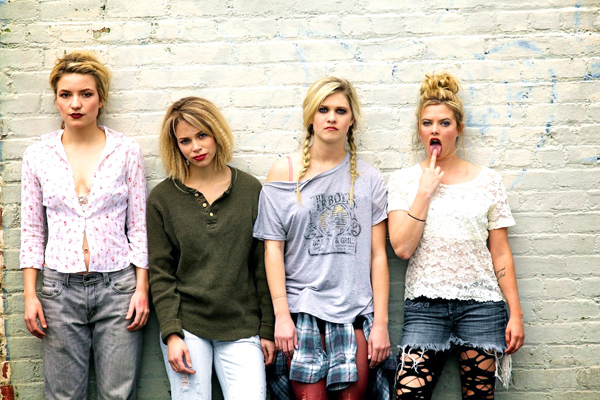 Truthful performances, taut direction, and judicious pacing ensure a rousing and illuminating glimpse into the backstory or this or, for that matter, any band on the moment-before of no-turning-back. It shows the fragility of that climb to the top. The precipice-costs and compromises; nothing is static, everything is fluid. We get a behind-the-scenes voyeuristic look (it's a loo, after all) into the flip side of art, the intersection of art and business. Like the music or not, the production gives you an appreciation of what goes into any kind of success. We're at the edge of our seats because, having made it this far, we wonder if the band will implode. 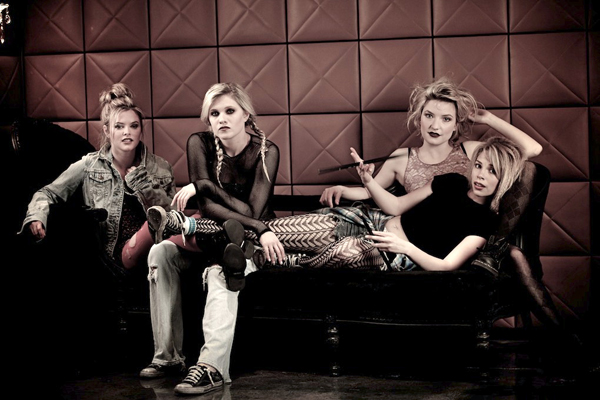 The staging was apt. Deals get made in the loo; transactions negotiated, finalized. And that's what these four women are doing, about to sign a contract, about to hit the big time. Setting it in a men's room, the grunge equivalent of a green room, not only gave the production an act of defiance (making it in a man's world), it gave it a crowded, claustrophobic feeling as well. It unified and condensed the story. Finally, it set off a nice contrast between desuetude of their present condition and their pending leap into fame and fortune, provided they don't flush their prospects down the toilet, which is the premise of the story. Nice was having the mirror serve as the fourth wall: we see ourselves in them, they think they've got some privacy, so we see them candid, vulnerable. This is quite unlike our imagined experience of them as they would be, diva demi-gods, on stage. 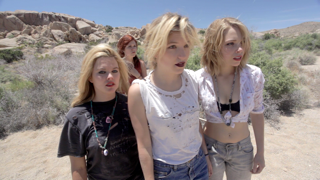