Why did UN Secretary-General Ban Ki-moon travel to Los Angeles last month to pitch the Sustainable Development Goals to a roomful of entertainment industry writers and producers?

What motivated scores of Hollywood's top show runners, as well as executives from 13 studios and networks, to head to Norman and Lyn Lear's home to hear Ban Ki-moon talk about eradicating poverty, ending hunger, achieving gender equality, making clean water and sanitation available, ensuring quality education for all and a dozen other ambitions for the world's seven billion people? 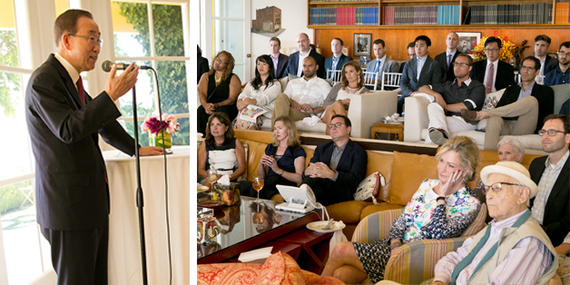 And how come the mission to crush the globe's 17 most urgent threats by the year 2030 is saddled with a mouthful as dully mumbly as the Sustainable Development Agenda?

Here's how the Secretary-General explained why he came to the creative community in August: "Your message, through TV and movies, can be seen by millions of people. When you write, you can make people believe. You can motivate. You can inspire. When people are inspired, we can make our world better for all people. I need your help. That's why I'm standing before you."

Here's how Grey's Anatomy executive producer Zoanne Clack responded: "I've been an ER doctor and worked with patients, and been a public health advocate around the world, but the power of the pen is the most powerful position I've had. It may seem like a frivolous endeavor to work in entertainment, but what you've said about the power of communication for education solidifies what I've felt."

The August meeting was the third time that Hollywood had come to the Lears' screening room to hear from UN leaders about the world's biggest problems, and to consider how they - as storytellers - could bring attention to their solutions. 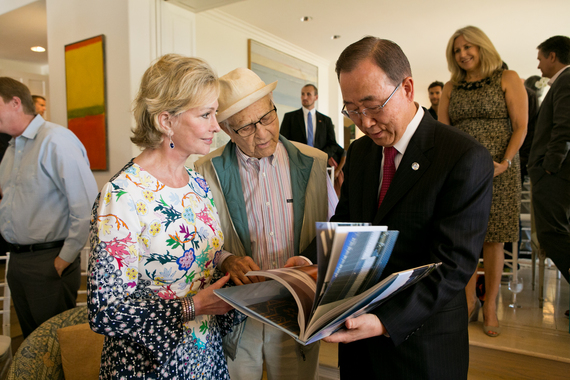 I had the privilege to emcee the three gatherings. I direct a research center at the University of Southern California's Annenberg School for Communication and Journalism. We study the impact of entertainment and media on society, and we try to marshal that power to advance the public good - to illuminate and repair the world. It's called The Norman Lear Center, in thanks for the Lears' generous support, and in tribute to Norman Lear's work as the creator of socially engaged entertainment. 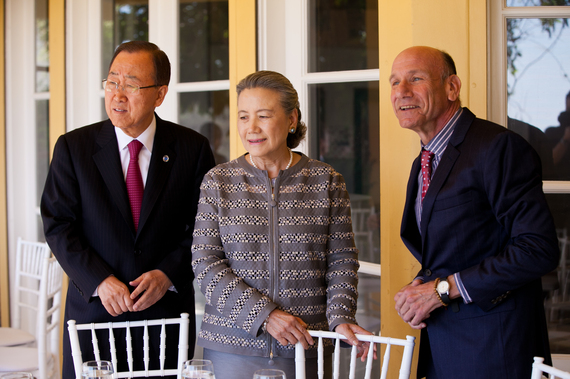 UN Secretary-General and Mrs. Ban Ki-moon with Marty Kaplan, looking out at the Pacific.

Mr. Ban began his remarks by addressing Norman: "Through your storytelling and vigilant initiatives you've been trying to bring about social changes. You have been trying to bring social progress into the living rooms of everybody. You have been making people laugh. You have been making people cry. I'm very much impressed, grateful and inspired by what you have been doing. You are a legend in our time. I've been working very hard, too, but nobody calls me a legend." When I thanked the Secretary-General for the miracle of getting the 193 UN member states to agree on and adopt the 17 SDGs, along with 169 statistical targets for achieving them, I told him - noting Norman's signature headwear - that "the only thing between you and being a legend is a hat."

The first UN meeting with Hollywood storytellers at the Lears' home focused on climate change. The second featured UN Under Secretary-General for the SDGs and Climate Change, Dr. David Nabarro. It was at that meeting that the executive producer of the CBS drama Elementary, Jason Tracey, popped this idea: What if a critical mass of writers and producers asked their studio and network partners to spread awareness of the SDGs with Public Service Announcements? PSAs, once common, have become a prime-time rarity. Why can't shows and networks give PSAs a chance to act in the public service again - to spotlight solutions and inspire hope? 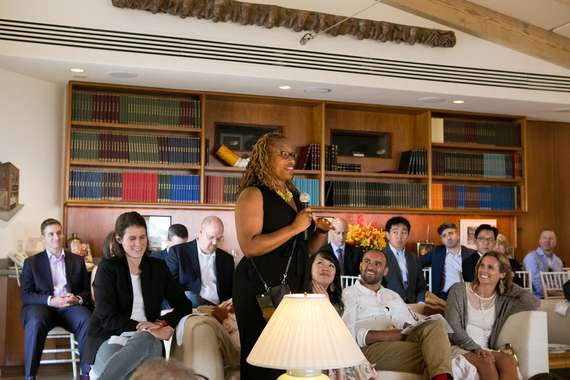 Tracey, together with Kate Folb, who directs the Lear Center's Hollywood, Health & Society program, an entertainment industry resource for public health, safety and security, sent a letter to the creative community to gauge interest in PSAs about the SDGs. More than 70 writers, producers and show runners have so far said, Count me in. Will their studios and networks embrace the idea? Stay tuned. 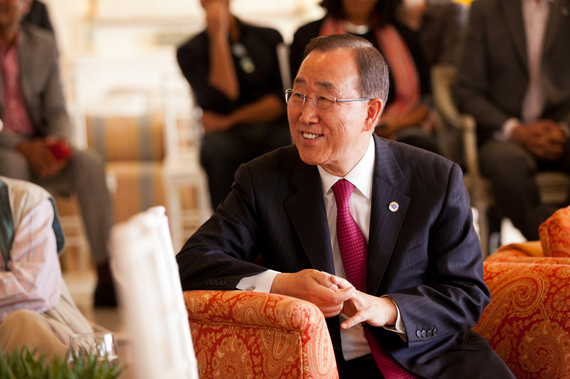 The UN is notorious for its bureaucracy, so it's no surprise that the vision of ending poverty, protecting the planet and ensuring prosperity for all has a bureaucratic name. I like much more than "Sustainable Development Agenda" the Secretary-General's gloss on it: "a to-do list for people and planet, and a blueprint for success." Looking at the chart of 17 cool icons developed for the goals, my colleague Kate Folb called them "a periodic table to save the world."

I think of the agenda as the world's promise to itself. Maher Nasser, outreach director in the UN's Public Information division, told the writers, "They aren't the United Nation's Sustainable Development Goals. They are your goals. They are our goals." Maybe the best thing Hollywood can do for the name is ignore it, and make the goals themselves the stars.